WHO's Not Declaring Pandemic For $ 425 Millions


Is Wall Street Behind the Delay in Declaring the Coronavirus Outbreak a “Pandemic”? A little known financial mechanism set up by the World Bank could be behind the decision not to declare the coronavirus a pandemic.

Alittle known specialized bond created in 2017 by the World Bank may hold the answer as to why U.S. and global health authorities have declined to label the global spread of the novel coronavirus a “pandemic.” Those bonds, now often referred to as “pandemic bonds,” were ostensibly intended to transfer the risk of potential pandemics in low-income nations to financial markets.

Yet, in light of the growing coronavirus outbreak, the investors who purchased those products could lose millions if global health authorities were to use that label in relation to the surge in global coronavirus cases.


On Tuesday, federal health officials at the Center for Disease Control and Prevention (CDC) announced that they are preparing for a “potential pandemic” of the novel coronavirus that first appeared in China late last year. The World Health Organization (WHO) has stated that an estimated 80,000 worldwide have contracted the disease, most of them in China, while more than 2,700 have died.

However, some have argued that the CDC’s concerns about a likely pandemic have come too late and that action should have been taken much earlier. For instance, in early February, Dr. Anthony Fauci, director of the US National Institute of Allergy and Infectious Disease, had told the New York Times that the novel coronavirus is “very, very transmissible, and it almost certainly is going to be a pandemic,” while former CDC director Dr. Thomas R. Frieden had echoed those concerns at the time, stating that it is “increasingly unlikely that the virus can be contained.”

Despite those warnings, among many others, the CDC waited to announce its concerns that the virus could spread throughout the United States. Their Tuesday announcement riled markets, wiping out $1.7 trillion in stock market value in just two days. The CDC’s warning has reportedly angered President Trump, who accused the agency of needlessly spooking financial markets.

Notably, WHO officials have taken an even more cautious approach than the CDC in their recent comments, stating that it is still “too early” to declare the coronavirus outbreak a “pandemic” while also asserting that “it is time to do everything you would do in preparing for a pandemic.”

The refusal to label the outbreak a pandemic is odd, since it refers to an epidemic or actively spreading disease that affects two or more regions worldwide. This currently describes the geographical spread of the highly contagious novel coronavirus, which has now resulted in significant clusters of cases far from China, namely in Italy and Iran. Countries closer to China, like South Korea, have also recently experienced an explosion in novel coronavirus infections.

It is possible that concerns over using the word “pandemic” could upset global markets and lead to economic turmoil, similar to what happened to the U.S. stock market following the CDC announcement on Tuesday. Though such concerns are valid, there is also evidence that a particular class of bonds issued by the World Bank that are closely related to official declarations of pandemics may also be responsible for having steered WHO and CDC officials away from using this term, even though the consequences of doing so could negatively impact global public health. 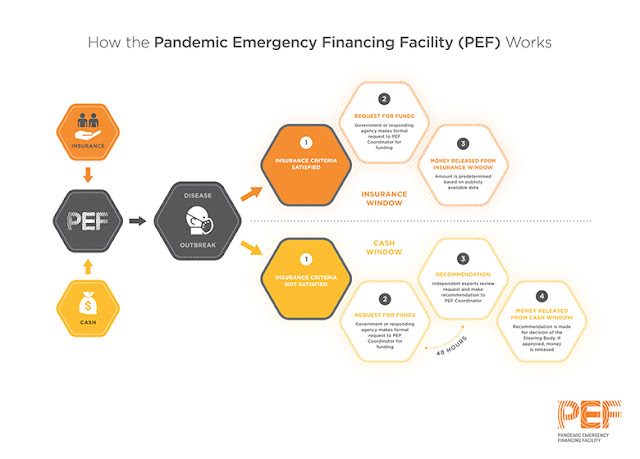 In June 2017, the World Bank announced the creation of “specialized bonds” that would be used to fund the previously created Pandemic Emergency Financing Facility (PEF) in the event of an officially-recognized (i.e. WHO-recognized) pandemic.

They were essentially sold under the premise that those who invested in the bonds would lose their money if any of six deadly pandemics hit, including coronavirus. Yet, if a pandemic did not occur before the bonds mature on July 15, 2020, investors would receive what they had originally paid for the bonds back in addition to interest and premium payments on those bonds that they recieve between the date of purchase and the bond’s maturation date.

The PEF, which these pandemic bonds fund, was created by the World Bank “to channel surge funding to developing countries facing the risk of a pandemic” and the creation of these so-called “pandemic bonds” was intended to transfer pandemic risk in low-income countries to global financial markets. According to a World Bank press release on the launch of the bonds, WHO backed the World Bank’s initiative.

However, there is much more to these “pandemic bonds” than meets the eye. For example, PEF has a “unique financing structure [that] combines funding from the bonds issued today with over-the-counter derivatives that transfer pandemic outbreak risk to derivative counterparties.” The World Bank asserted that this structure was used in order “to attract a wider, more diverse set of investors.”

Critics, however, have called the unnecessarily convoluted system “World-Bank-enabled looting” that enriches intermediaries and investors instead of the funds intended targets, in this case low-income countries struggling to fight a pandemic. These critics have asked why not merely give these funds to a body like the Contingency Fund for Emergencies at the World Health Organization (WHO), where the funds could go directly to affected countries in need.

Notably, WHO determines if a pandemic meets the criteria that would see investors’ money be funneled into PEF as opposed to their own pockets, which would take place if no pandemic is declared between now and when the bonds are set to mature this upcoming July.

In 2017, the news site Quartz described the mechanism of “pandemic bonds” as follows:

“Investors buy the bonds and receive regular coupons payments in return. If there is an outbreak of disease, the investors don’t get their initial money back. There are two varieties of debt, both scheduled to mature in July 2020.

The first bond raised $225 million and features an interest rate of around 7%. Payout on the bond is suspended if there is an outbreak of new influenza viruses or coronaviridae (SARS, MERS). The second, riskier bond raised $95 million at an interest rate of more than 11%. This bond keeps investors’ money if there is an outbreak of Filovirus, Coronavirus, Lassa Fever, Rift Valley Fever, and/or Crimean Congo Hemorrhagic Fever. The World Bank also issued $105 million in swap derivatives that work in a similar way.”

In 2017, the World Bank issued $425 million in these “pandemic bonds” and the bond sale was reported to have been 200 percent oversubscribed, “with investors eager to get their hands on the high-yield returns on offer,” according to reports.

The premiums bondholders have received thus far were largely funded by the governments of Japan and Germany, who are also the top nation-state funders of WHO behind the United States and United Kingdom. Reports have claimed that most of the bondholders are firms and individuals based in Europe.

Some analysts have argued that these pandemic bonds were never intended to aid low-income pandemic-stricken countries, but instead to enrich Wall Street investors.

For instance, American economic forecaster Martin Armstrong has called the World Bank’s pandemic bonds “a giant gamble in the global financial casino” and a “scheme like no other,” recently arguing that these bonds could present a “a structured derivative time bomb” that could upend financial markets if a pandemic is declared by WHO.

Armstrong went on to say that it is in WHO’s interest to declare the coronavirus outbreak a pandemic, but noted that, in doing so, they would cause bondholders to take significant losses.

Bodo Ellmers, the director of the Global Policy Forum’s sustainable development finance program, has similarly called pandemic bonds “useless,” while Olga Jonas, who worked at the World Bank as an economist for over 30 years, said the program was “designed to fail” because the bonds were crafted in order “to reduce the probability of payout.”

Economic and business analyst and host of the podcast “Quoth the Raven” Chris Irons told MintPress News that, with respect to the pandemic bonds, “What’s important is to focus on who stands to benefit from this not being declared a pandemic,” a difficult task given that the identity of most bondholders are not currently publicly available.

Irons also noted that, in his opinion, “WHO and the CDC have been caught a little flat-footed here” and that some governments that fund WHO, particularly the Trump administration, appear “more concerned with the stock market than giving people information that may be necessary and vital.” He added that behind-closed-doors pressure on WHO by those who stand to lose financially from an official declaration of a pandemic would be “unsurprising.” 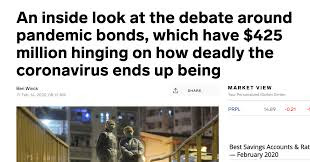 How to trigger a payout

As the coronavirus outbreak grows, concern has grown among those invested in pandemic bonds that payout to countries affected by coronavirus will be triggered, despite the clear delay by WHO in declaring the outbreak as a pandemic.

While WHO could theoretically alter the criteria that would trigger payout and cause bondholders to lose big, some recent reports have claimed that bondholders are seeking to rid themselves of the bonds prior to their July maturation date.

German media outlet Deutsche-Welle noted that the trigger for the first class of pandemic bonds, valued at $225 million, would normally have already been met due to the criterion of more than 2,500 deaths in a “developing country.”

For the second and riskier category of pandemic bonds, those bonds are triggered when the disease in question crosses an international border and causes more than 20 deaths in the second country. At the time of publication of this article, Iran has recorded at least 50 deaths, which should have triggered this second category of pandemic bonds, valued at $95 million. Yet, WHO yet to comment on how this criterion for the second category bonds has been met.

The WHO’s decision to refuse to use the “p-word” may be the result of several factors, though the pandemic bonds loom large as a $425 million incentive for not doing so. While avoiding the use of the term may please pandemic bondholders, it is set to have major negative consequences for global public health, particularly given the fact that early action against epidemic and pandemic outbreaks is widely considered to be an imperative. 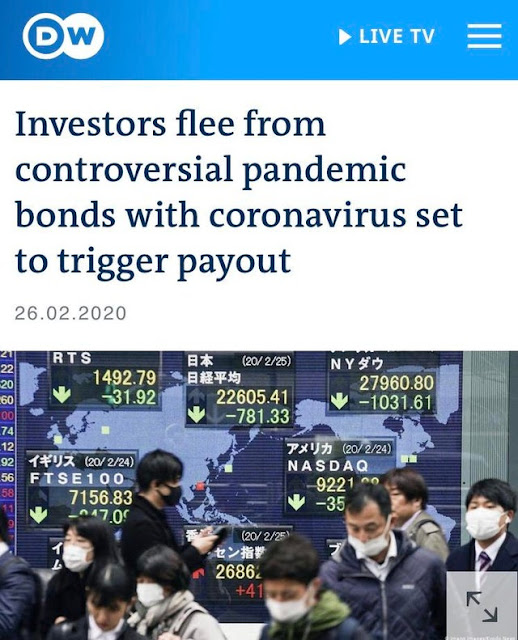