(Yuichiro Kakutani's article from the WASHINGTON FREE BEACON on 18 December 2019.) 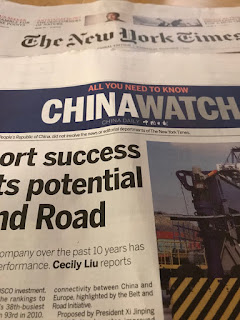 China routinely broke federal law by not disclosing how much it spent to publish regime propaganda in the New York Times, the Washington Post, and other newspapers, an expert review of foreign agent registration filings concluded.

China Daily, an official mouthpiece of the Chinese Communist Party, has published hundreds of propaganda articles designed to look like ordinary news stories in some of America's most influential newspapers.

While foreign agents may place ads in the United States, the propaganda outlet has repeatedly violated the Foreign Agent Registration Act (FARA) by failing to provide full disclosures about its purchases.

China Daily has published propaganda in mainstream outlets for decades, but did not disclose its purchases of space in American newspapers to the Department of Justice until 2012. Even after it began acknowledging its relationship with the papers, the regime mouthpiece continued to violate federal disclosure requirements.


China Daily has failed to provide breakdowns of spending activities and withheld copies of online ads, among other omissions that violate federal law, according to experts who reviewed years of its FARA filings.

The Washington Free Beacon reviewed all of the physical copies of China Daily‘s ads filed with the DOJ, as well as online ads the propaganda outlet did not submit to the department. China Daily has run more than 700 online ads designed to look like news articles and purchased 500 print pages in six American newspapers over the last seven years.

These propaganda articles frame state oppression in Xinjiang, Tibet, and Hong Kong in a positive light and run alongside actual news stories produced by reporters at the Post, Times, Wall Street Journal, and other outlets.

Rep. Jim Banks (R., Ind.), a member of the House Armed Services Committee, has frequently criticized China Daily, arguing that the newspaper should not be distributed to the offices of members of Congress. He said American newspapers traded credibility for ad revenue. "These outlets claim to support democracy, but they've participated in a cover-up for an ongoing communist-run genocide," Banks said. "It's disgusting." 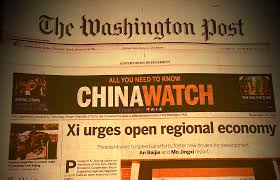 A spokesman for the Post told the Free Beacon that the newspaper has run China Daily ads for "more than 30 years." By 2012, the regime mouthpiece's operation was running dozens of ads per year mimicking real articles in major outlets under the banner of "China Watch"—a self-proclaimed "high-end think tank platform" backed by China Daily.

Federal law requires foreign agents to report and provide copies of all propaganda that is "disseminated or circulated among two or more persons" in the United States. Ben Freeman, director of the Foreign Influence Transparency Initiative at the Center for International Policy, said China Daily‘s ad inserts are subject to those requirements. "Clearly, an ad that's in the Washington Post, the Wall Street Journal, or any big media outlet is going to be distributed to two or more people," Freeman said.

China Daily registered as a foreign agent in 1983, but did not disclose its relationship with U.S. newspapers in its biannual reports for 29 years. The outlet did not respond to requests for comment about its FARA filings. Joshua Rosenstein, a FARA lawyer at Sandler Reiff Lamb Rosenstein & Birkenstock, P.C., said China Daily‘s failure to report ads prior to 2012 was a clear violation of disclosure requirements.

"If they were to have placed paid ads in the Washington Post as early as 2010, that would be the sort of thing they would need to detail," Rosenstein said. After reviewing China Daily‘s most recent report, filed in November, both Rosenstein and Freeman said the outlet continues to flout the law.

The report illegally lumps together all expenditures under two vague categories: "Total Cost of Goods Sold" and "Operation Expenses." China Daily should have broken down its expenditures, detailing how much money it paid to each outlet for each ad purchase, said the two experts. "If I'm just looking at one line item for $4 million in operating expenses, how can I possibly evaluate that?" Freeman said. "I don't think I can, frankly."

The vague disclosures do reveal that China Daily is flush with money from the Chinese Communist Party, including $11.8 million that the paper's Beijing office wired to the U.S. branch over the past year. The cash transfers gave China Daily the ninth-largest budget of all FARA registered entities, according to the Center for Responsive Politics.

"I'm sure the Chinese government wouldn't have invested so much money into this effort in almost every major newspaper if they didn't think that they were getting some return," Zack Cooper, a research fellow at the American Enterprise Institute, told the Free Beacon.

China Daily uses its large war chest to purchase hundreds of ads in the print and online versions of the Times, Post, and Journal. Ad spending peaked in 2016, when it took out ads in more than 140 pages in American outlets.

Spokesmen for all three newspapers declined to say how much they have taken from China Daily over the years, but the spending could easily run into the millions, according to public relations professionals. One firm, which requested anonymity as it continues to publish ads with all three outlets, said full-page ads cost between $65,000 and $120,000 each.

While many China Daily articles touted the country's economic achievements or tourist attractions, others pushed explicit political messages. These articles contain the legally required disclaimer that a Chinese entity prepared the ads, but do not say that China Daily is owned by the Chinese Communist Party. 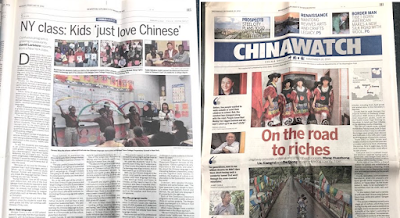 One China Daily article from March that appeared on the Journal‘s website described China's detention of more than one million Muslim Uyghurs in Xinjiang reeducation camps as a "law-based campaign of de-radicalization." A Journal spokesperson said that her outlet reviews all ads for "issues of taste and accuracy," but did not say whether China Daily‘s articles on Xinjiang met those guidelines.

Meanwhile, more than half of the Post‘s China Daily ad inserts since 2012 have featured propaganda articles about Tibet, where China has repressed dissidents and Buddhists for decades. Those articles depicted China's presence in Tibet in a positive light, saying the Chinese Communist Party's economic and social policies have brought prosperity and peace to the region. "Harmony rules in Tibet's Catholic town," a 2013 China Daily article in the Post says. "Through mediation by the local government [Buddhism and Catholicism] entered an era of coexistence." 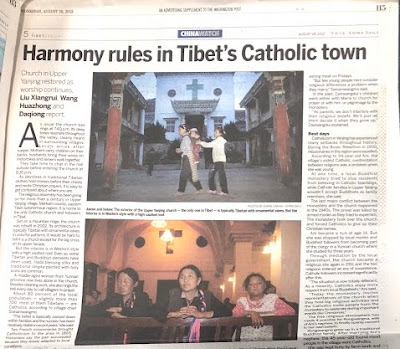 A Post spokesperson defended the ads, arguing that the newspaper gives "wide latitude" to advertisers as long as the ads do not break any laws. Some ads appeared adjacent to real news articles. The Journal, for instance, ran a Journal article and a China Daily article that gave opposite assessments of the Chinese economy side by side in 2014.

In the months leading up to the 2018 election, China Daily ran ads critical of the trade war in Roll Call, a Washington, D.C., publication, and in the Iowa-based Des Moines Register. The Register ad labeled the trade war a "fruit of a president's folly," provoking a response from President Donald Trump on Twitter.

"China is actually placing propaganda ads in the Des Moines Register and other papers, made to look like news," Trump tweeted. "That's because we are beating them on Trade, opening markets, and the farmers will make a fortune when this is over!"

A Times spokesperson said that the lucrative ad deals with China Daily have not compromised the paper's reporting, pointing to a recent exposé on oppression in Xinjiang as evidence. "The New York Times covers China thoroughly and aggressively, and at no time has advertising influenced our coverage," she said.

"These newspapers are doing a disservice to their brave journalists in China who are taking tremendous risks to report on the Xinjiang issue," she said. "I think newspapers should take a more principled stance to reject those ads that are clearly not speaking the truth." 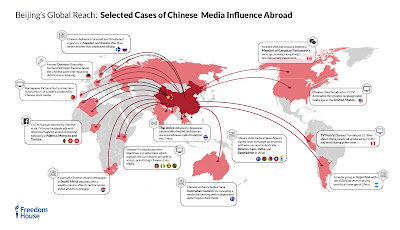 The Trump administration said on Tuesday said it will begin treating five major Chinese state-run media entities with U.S. operations the same as foreign embassies, requiring them to register their employees and U.S. properties with the State Department.

Two senior state department officials said the decision was made because China has been tightening state control over its media, and Chinese President Xi Jinping has made more aggressive use of them to spread pro-Beijing propaganda.

"The control over both the content and editorial control have only strengthened over the course of Xi Jinping's term in power," said one official. "These guys are in fact arms of the CCP's (Chinese Community Party's) propaganda apparatus."

Beijing was not informed in advance of the decision and would be notified Tuesday afternoon, one official said. Beijing's control of China's state-owned media has become "more and more draconian," the second official said. Both officials spoke to reporters on condition of anonymity.

Tensions between the two superpowers have escalated since President Donald Trump came to office three years ago, with disputes ranging from trade tariffs to accusations of Chinese spying in the United States and to U.S. support for Taiwan. Tuesday's decision, the officials said, is not linked to any recent developments in Sino-U.S. relations and has been under consideration for some time.

The five entities' U.S. operations will have to disclose their personnel rosters and hiring and firing decisions and register properties in the United States that they rent or own with the State Department, the officials said. They also will have to seek advanced approval before they lease or purchase new U.S. properties, they said.

Asked if there are concerns that Beijing will retaliate against Western media based in China, one official noted that foreign news outlets there already work under strict rules and that the new disclosure rules impose no restrictions on the five state-owned Chinese entities' U.S. operations. "These guys operate in a far more liberal environment here in the United States than any foreign press enjoy in the People's Republic of China," the official said.