BANGKOK -- Thailand's police have suffered another blow to their reputation from the release of a video that appears to show a man dying in custody with a plastic bag over his head.

But the deadly interrogation method is not the work of just one rogue officer, according to retired senior members of a force that Prime Minister Prayuth Chan-ocha had pledged to reform after he staged the 2014 coup.

The video, which leaked last month and went viral, drawing 3.6 million views, allegedly shows 24-year-old Jeerapong Thanapat, who had been arrested in Nakhon Sawan, 250 km north of the capital, on suspicion of selling methamphetamine pills, suffocating to death as officers demanded 2 million baht ($60,000) for his freedom. The superintendent of the station, Col. Thitisan Utthanaphon, nicknamed "Joe Ferrari" for his sports car collection, was later arrested.

"The plastic bag method has been used for over 30 years," Chaiyawat Sengnui, a former detective in the southern province of Trang, told Thai-language daily Matichon after the video was leaked. "I have seen my seniors using it during my time with special operations with the provincial police. This is nothing new," he added, echoing comments from other retired senior police officers in the wake of the video.

The outcry over the video has brought renewed attention to the seedy underbelly of Thai police, which, like the country's powerful military, has been regularly accused by local and international human rights campaigners of abusing people in custody. Sunai Phasuk, senior Thailand researcher for Human Rights Watch, said: 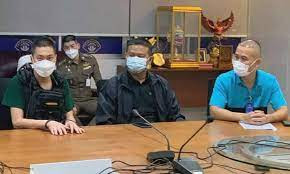 Pol. Col. Thitisan Utthanaphon, left, is nicknamed "Joe Ferrari" for his sports car collection. He was photographed at the Crime Suppression Division in Bangkok on Aug. 26. (Photo by Thai police)

Local human rights groups have been compiling cases of alleged torture. The Cross Cultural Foundation has documented 20 deaths in police custody in the country between 2004 and 2017. The National Human Rights Commission of Thailand has received 306 complaints of torture from 2004 till 2021.

But Pornpen Khongkachonkiet, director of the Cross Cultural Foundation, said the number could be much higher, since "the police do not readily register complaints of torture that happen in military or police custody." This reflects a loophole in Thailand's law: torture is not illegal in the country.

"Police reject complaints because they need evidence, like photos or medical reports, to even act," she said. "Police have also charged victims of torture of complaining about such abuse in order to clean up their image for promotions in the force." 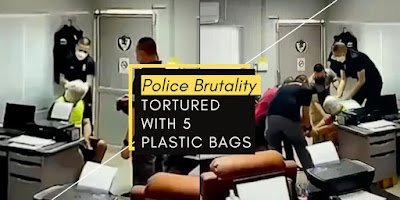 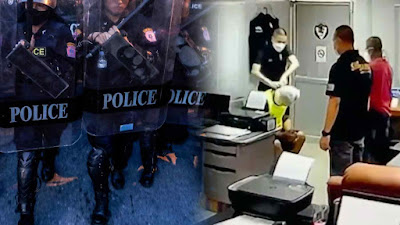 Allegations of abuses committed by the more than 200,000-member Royal Thai Police are not new nor confined to military-led governments. In 2003, the government of then-Prime Minister Thaksin Shinawatra -- a telecoms tycoon who had worked as a police officer for over a decade -- launched a "war on drugs" against what had become a national crisis.

The first three months of that campaign saw "some 2,800 extrajudicial killings," Human Rights Watch said in 2008. "In 2007, an official investigation found that more than half of those killed had no connection to any drugs."

But attempts at police reform have made little headway. It was one of the pledges of Prime Minister Prayuth Chan-ocha soon after the coup as the then-army commander. Police reform was also part of the 2017 Constitution, drafted by a junta-appointed committee. Reform has been stalled in part by a lengthy legislative process.

"A draft of police reform was finished and sent to the prime minister and cabinet and to the national police office to be checked and revised," said Kamnoon Sithisaman, an appointed senator in the upper house and a member of the committee to draft a new national police law. "Right now, the draft is in the parliament, awaiting a second reading."

But institutional turf wars are also at play, given the long-standing rivalry between the military and police. "The police institution must be improved... but honestly, if the chairman of the Office of Police is from the army, the police will never improve," said Seripisut Temiyavet, former head of Thailand's national police force and now firebrand opposition leader, in a clear dig at Prayuth, who heads the state body with police oversight.

"Why isn't a policeman the chairman of the police?" Seripisut said rhetorically during a media scrum outside parliament. "The prime minster, from the army, just wants power... He wants to directly control the police by being the police chairman. If it keeps going on like this, there will be no reform." 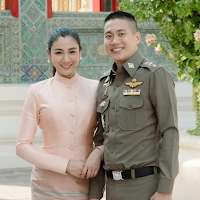 Alleged criminal behavior by police has been flagged by opposition parliamentarians during debates in the legislature. "One of the many factors contributing to [police torture] is money," Rangsiman Rome, a lawmaker for the Move Forward Party, which draws support from Thai youth, told local media. "For a policeman to progress in their career, money is needed to build a bigger network than other policemen. A bigger network means better promotion than other policemen."

The superintendent in the alleged plastic bag torture, Thitisan, epitomized this. Considered a rising star in the force, he led a team of six officers in interrogations. But Thitisan's extravagant lifestyle has also been exposed after abuse allegations became public. He reportedly lived in a mansion behind high walls and had a fleet of 30 luxury sports cars, including a Ferrari, Lamborghini Aventador and several Porsches. The monthly salary of the 41-year-old policeman was a mere 43,330 Thai baht ($1,300).

Chuvit Kamolvisit, an outspoken former politician and former massage parlor owner, stepped into the fray after Thitisan was arrested. He questions the motive for the video's release, casting doubt on reports it was leaked by a junior police officer who was enraged over injustice.

"This leak is not about a low ranking police officer who cannot stand injustice, or fearing for his life," said Chuvit, whose verbal showdowns with the police have been widely reported, in a Facebook post. "This is not about morality. It is all about money."

"Now that the casinos are closed because of COVID as are the bars, how else are they going to earn that extra money?" he said, referring to allegations of police involvement in the shadow economy. "That video would never have seen the light of day if every policeman in the station was happy. Why else would they poison their water?"