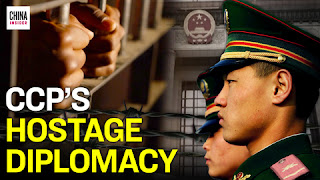 China played dirty to get Huawei’s 'princess' back — too dirty even to tell its own people: Family and supporters of two diplomatic hostages held in China for almost three years have celebrated their arrival home in Canada, as the woman they were traded for, Meng Wanzhou, was given a hero's welcome in the city of Shenzhen.

The trio's return to their respective homes caps a historic three-year standoff between the world's two superpowers, with Canada and the Chinese company Huawei caught in the middle. Upon arriving home to Calgary, one of the two Canadians Michael Kovrig said "It’s fantastic to be back home in Canada".

He'd endured more than a thousand days locked in a Chinese prison with limited access to lawyers and no ability to speak to visitors outside of a monthly consular visit. Meng Wanzhou, the wealthy daughter of Huawei's boss Ren Zhengfei sometimes dubbed a princess by Chinese media, told Chinese state TV as she departed Canada: "If it wasn't for a strong motherland, I wouldn't have my freedom today."

She had earlier thanked the Canadian government "for upholding the rule of law", after being freed to leave Canada when US prosecutors suddenly abandoned their three-year effort to extradite her to the US. She was wanted for bank and wire fraud charges relating to Huawei's alleged efforts to subvert US sanctions and sell equipment to Iran.

Meng Wanzhou was arrested as the US tried to limit Huawei's global 5G rollout. The merits of the US claims will now never be tested in court, but China always viewed the case as a blatant political attack on a fast-rising Chinese company.

Her 2018 arrest came as the Trump administration ramped up pressure on Huawei to curtail its overseas expansion into the 5G networks of the world. Whatever the aim at the time, it's hard to believe the Trump administration would have pursued her arrest had it foreseen the consequences. And now that the saga is over, taken on face value, Meng Wanzhou's release back to China this weekend is a big victory for Beijing. 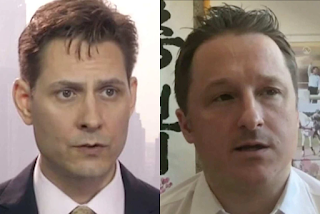 From the moment she was arrested in late 2018 when Canadian authorities executed an arrest warrant on behalf of the US as she transited through Vancouver, China's government has publicly and privately lobbied hard for her release.

When its security agents took the brutal step of detaining analyst and former diplomat Michael Kovrig in Beijing and businessman Michael Spavor in the north-eastern city of Dandong just 10 days later, there was one objective: Pressure the Canadians and/or the Americans to abandon their legal process.

When China's leaders then approved the ghoulish step a few weeks later of hastily retrying a convicted Canadian drug smuggler in a one-day show trial and sentencing him to death, they had one objective: Bring Meng home. When they approved the sentencing of a further three Canadian citizens to death for drugs crimes, the same objective likely prevailed.

Now, just four weeks shy of a decision in a torturously-long extradition process, the Americans have blinked. China has averted the tremendous humiliation of having the daughter of the head of one of its most celebrated companies being put on trial in a court of its greatest rival — the United States.

As Meng's chartered flight from Canada entered Chinese airspace, headlines buzzed with excitement. Crowds rushed to Shenzhen airport to greet her with flowers.

China's government ordered its state-run media to celebrate with wall-to-wall coverage of Meng thanking "the motherland" and the Communist Party, while other articles framed her release as a sign of China's strength.

There was just one thing missing. There's been absolutely no mention in China's media of the Canadians being released in order to get Ms Meng back. 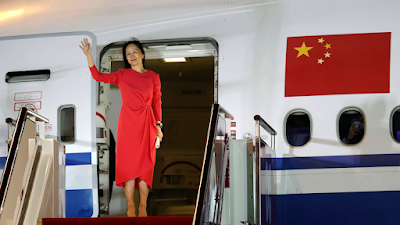 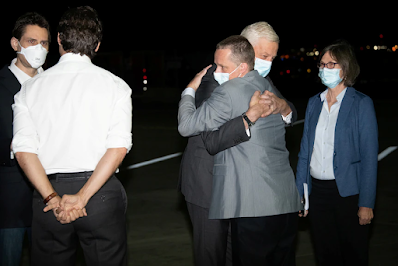 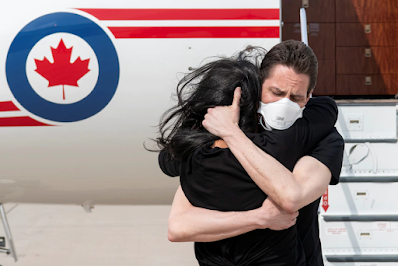 "Hostage diplomacy has worked", said Natasha Kassam, a China specialist at the Lowy Institute who previously worked as a diplomat in Beijing. There's no doubt Beijing sees this as a victory and there's no incentive to not try this again in the future," she said.

But admitting to 1.4 billion citizens that China played such a ruthless and dirty game to get its way appears a step too far for Beijing's propaganda chiefs. The censorship of Kovrig and Spavor's release from Chinese jails reflects how awkward it is. For almost three years, Chinese government spokespeople and state media have repeatedly denied the obvious link between their arrests and Meng Wanzhou's.

As Meng's legal team was making final submissions in a Canadian court in August seeking to avoid extradition, a closed Chinese court sentenced Michael Spavor to 11 years in jail for obtaining state secrets. Details were scarce of what he supposedly did wrong.

Michael Kovrig was also tried in a Beijing closed court, with Chinese government media reports of their trials never drawing any direct link to Meng. Foreign Ministry spokespeople bristled at claims of "arbitrary detention", throwing the accusation back at the US and Canada.

Now China's censors have been scrubbing comments off social media sites that question why two men accused of such serious crimes against China could be suddenly released. Was the government lying about their espionage crimes? Was it lying about their case not being linked to Meng's? Would China, a self-proclaimed "rule of law country" run by an authoritarian one-party state, take hostages to get its way? In the raucous celebrations for Meng's homecoming, authorities seem to hope few people notice.

A win with costs

Despite getting what it wanted, China's government has also taken a heavy reputational hit through its response to Meng's case.

The Chinese government's heavy role throughout has affirmed suspicions that Huawei is closely intertwined with the ruling Communist Party, despite Huawei's claim that it's a private company that wouldn't comply if Beijing wanted to use its networks for future espionage. Such concerns have likely played into decisions of countries such as the UK in reversing plans to install Huawei equipment in its 5G networks.

And in August, as Michael Spavor was sentenced to 11 years in jail, diplomats from 25 countries gathered at Canada's embassy in Beijing to express solidarity against China's use of arbitrary detention. China's actions to free Meng have pulled Western nations together in opposition.

Australia knows only too well.

The departure of the two Michaels gives little hope to the two Australians being held for espionage in Beijing. Yang Hengjun, a one-time Chinese state security employee, and Cheng Lei, a state TV newsreader, are languishing behind bars in separate cases that appear highly political.

"We've never had the same clarity about their detention as we've had with the two Canadians", said Ms Kassam from the Lowy Institute. There's no clear path we can see to secure their freedom." 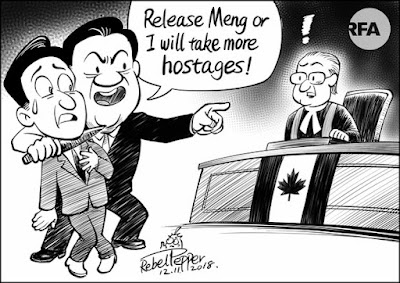 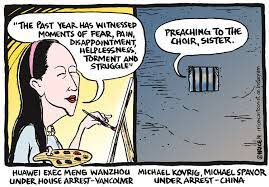