(This post is direct from the Reuters UK on 23 July 2012.)
(Reuters) - Daiwa Securities Group aims to spearhead a $380 million investment in Myanmar to build an information technology backbone for the government in partnership with major Japanese tech companies.

The ambitious plan underscores the drive by Japan to stake out a competitive position in Myanmar, a resource-rich and infrastructure-poor country of 60 million that began opening its economy just a year ago after nearly 50 years of army rule.
Daiwa, which has long-standing links in Myanmar and has already been chosen to help set up a local stock exchange, has been selected by the central bank to draw up plans for the computer network and is seeking Japanese government aid to offset the cost, a Daiwa executive said.

Panasonic Corp., Toshiba Corp., Hitachi Ltd, NEC Corp. and KDDI have indicated an interest in joining the project and providing technology and services, Takashi Fukai, a president of Daiwa Institute of Research, told Reuters in an interview.
"We're going into Myanmar in a way that is all-Japan," he said. The companies he named as potential partners declined to comment.
Over the past year, the quasi-civilian government of Myanmar that took over from the military junta has undertaken ambitious reforms that convinced both the United States and the European Union to respond with diplomatic and economic gestures.
In a year of fragile democracy, the government has freed hundreds of political prisoners, legalized trade unions, signed peace deals with ethnic rebels, eased censorship, unshackled the political opposition, reformed its currency and held historic by-elections.
Daiwa's plan would connect all government ministries in Myanmar as well as schools and hospitals to a 'cloud' computing system that it sees as a cheaper and faster alternative to building traditional server-based systems in a country where the supply of electricity and network engineers remains scarce.
The 'cloud'-based system was expected to cost about 30 billion yen ($384 million), and start with the central bank's hubs in the capital Naypyitaw, the country's biggest city, Yangon, and the second-largest, Mandalay, Fukai said.
STOCK EXCHANGE PROJECT
The investment would bolster Daiwa's strategic position as the major conduit between Myanmar and Japan, following a deal in May to develop a new stock exchange for the country. Daiwa and the Tokyo Stock Exchange are partners in that project.
Fujitsu   and NTT Data   have also begun a study of Myanmar's intrabank settlement system funded by the Japan International Cooperation Agency.
Fukai said revamping the tiny Myanmar securities exchange, in which Daiwa is a joint venture partner, into a full-blown trading hub would cost around 2 billion yen.
A stock exchange would help draw foreign investment to Myanmar and could be up and running by 2015, he said.
Daiwa has approached more than 20 Myanmar companies to list on the emerging exchange, including a gas company, a mining firm, and agricultural enterprise, Fukai said.
Using Vietnam as an indicator of Myanmar's likely path, Fukai said he expected 180 to 300 firms would trade publicly by 2020. If 300 companies were listed, the project would return a profit of roughly 1 billion yen, he said.
From October, Daiwa also plans to form a joint company with a local software developer ACE Data Systems to handle its business in Myanmar. ACE is run by Thein Oo, chairman of the Myanmar Computer Federation, whose connections have been instrumental in Daiwa's business growth in the country, Fukai said. 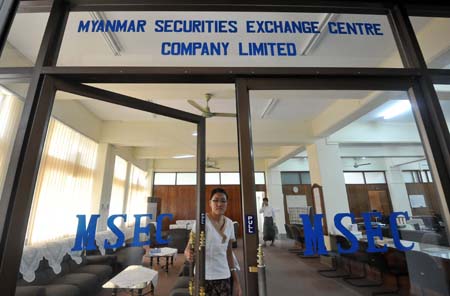