Killing of Yakhine Buddhists in Malaysia

(Direct translation of the News Article from the Narinjara News on 25 July 2012.)
Taliban was quite late in issuing threats against Burma since their terrorist-brothers the Al-Qaeda had already issued death threats against Burma just after the Buddhist mob killing of ten Bengali-Muslims on June 3 in Taunggup as a retaliation for the brutal rape and murder of young Buddhist Yakhin girl by three Bengali-Muslim men in Arrakan.
Even the OIC (Organization of Islamic Cooperation) Secretary-General Ekmeleddin Ihsanoglu has sent a warning letter to Burmese President Thein Sein to be careful in his treatment of illegal Bengali-Muslims after U Thein Sein bluntly told the visiting UNHCR High Commissioner Antonio Guterres on July 11 that Burma does not and will not recognize the Bengalis as an indigenous group of Burma. 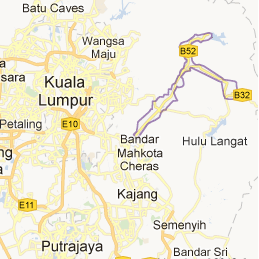 One of the two victims of some unknown Islamic terrorist group in Malaysia was Soe Naing (age 38) from the Kyaing-Taung village of Pauk-Taw township. His father is U Maung Maung Chay and mother is Daw Thaung Sein Oo. Another victim was Kyaw Thein (a) Saw Aung (age 36) from the Bawdi-gone village of Maung-Daw township.
“They went out for a job interview on the 18th and they didn’t come back that day. That evening we called their hand-phones. Phones rung but they didn’t pick up. About three days later on 21st a Chinese man in Hulu-Lungat in Kajang township reported to the police that he found two corpses. Cops brought the corpses in and called us at ARRC office on 23rd. On 24th we went to the morgue and discovered the corpses were our two missing Yakhines,” told Min Aung Naing from the ARRC (Arrakan Refugee Relief Committee) office in KL.
According to Min Aung Naing that was not the first and only case of Yakhine Buddhists getting killed here in Malaysia as so many Yakhaine Buddhists were often killed in Malaysia before and he was afraid that there would be more killings in future as the Bengali Muslim troubles back home get worsened.
"The way things are happening back home in Arrakan it will be more dangerous for us Yakhine Buddhists here in Malaysia," added Min Aung Naing from ARRC office.
Soe Naing was the fourth son among six siblings and Kyaw Thein left two young sons and one baby daughter back home in Arrakan.
Posted by Hla Oo at 9:31 PM