(This post is direct from the The Jakarta Globe on 14 July 2012.)
Hundreds of Islamic hard-liners protested outside the Myanmar embassy in the Indonesian capital Jakarta on Friday to “stop the genocide” of Rohingya Muslims in the wake of deadly communal unrest.
Around 300 hard-liners from organizations, including the Islamic Defenders Front (FPI) and Jemaah Anshorut Tauhid (JAT), threatened to storm the Myanmar embassy in Jakarta as some 50 police officers guarded the building.
“If embassy officials refuse to talk with us, I demand all of you break into the building and turn it upside down,” a leader on a loudspeaker told protesters, who shouted “Allahu Akbar” (God is Greatest).

“Every drop of blood that is shed from a Muslim must be paid back. Nothing is free in this world,” the man shouted, as protesters carried banners that read “FPI is ready to wage jihad”.
“Go to Myanmar and carry out jihad for your Muslim brothers,” the man said.
The hard-liners left without entering the embassy and proceeded to a UN building to protest.
Communal violence between ethnic Buddhist Rakhine and local Muslims, including the Rohingya, swept Myanmar’s Rakhine state in June, leaving dozens dead and tens of thousands homeless.
Around 800,000 Rohingyas live in Myanmar and are considered to be some of the world’s most persecuted minorities.
Myanmar President Thein Sein told the UN on Thursday it was “impossible to accept the illegally entered Rohingyas, who are not our ethnicity,” saying they should be sent to refugee camps or be deported.
Decades of discrimination have left the Rohingya stateless, with Myanmar implementing restrictions on their movement and withholding land rights, education and public services, the UN says.
Agence France-Presse 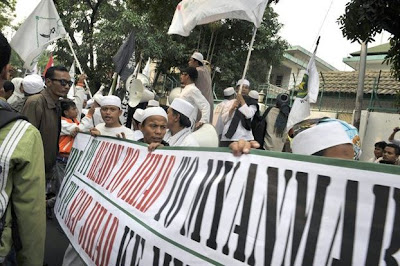