(This article by Nozrul Islam is direct from the AsiaNews.IT on 7 March 2013.)

Dhaka (AsiaNews) - Acts of violence, especially against Bangladesh's Hindu minority, and strikes (hartal) continue across the country as Jamaat-e-Islami supporters call for reunification with Pakistan, and the creation of a "pure" state, free of its non-Muslim population.

Since unrest began more than a week ago, 87 people have died - mostly police and peaceful protesters. The atmosphere is increasingly tense after the Bangladesh Nationalist Party (BNP), the country's main opposition party, decided to throw its support behind Jamaat and call for an end of war tribunals set up by the ruling Awami League.

In addition, the BNP has called for the death penalty imposed on Jamaat's deputy chief Delwar Hossain Sayeedi to be dropped, and for the government to resign. For Prime Minister Sheikh Hasina, leader of the Awami League, opposition demands are unacceptable because they would mean her defeat.

However, Jamaat appears bent on pursuing its agenda come what may. With the BNP on its side, it does not seem willing to stop its terror strategy. In fact, it has begun handing out weapons to women and children to "save Islam and its soul from danger".

Well-organised, the Islamic party has a large pool of supporters. On a number of blogs, many of them are openly calling for reunification with Pakistan and the expulsion of Hindus, atheists, Buddhists, and Christians.

Instructions are also provided on how to sabotage railway lines, attack security forces, and cause unrest during strikes. Some of the suggestions are quite "creative". For example, on one site instructions are given on how to generate pictures using the photo of death-row leader Sayeedi against the background of a full moon.

Waved as if they were real thing, the pictures have been used the stress the urgency to save him and avoid going to hell. In other touched up photos showing people floating in the air, radiant faces, jinn (spirits) and angels are presented as supporting the Muslim revolt.

As the country's largest minority (9.6 per cent), Hindus have been the main target until now. What is more, most witnesses in the war crimes trials have been Hindus. Although exact figures do not exist, Bangladesh's War of Liberation in 1971 is said to have caused the death of up to 1.5 million civilians. At least 200,000 women were raped, mostly Hindu. About 60 per cent of all Bangladeshi refugees in India were Hindu.

The latest wave of attacks also suggest that other religious (Buddhist and Christian) and ethnic (tribal) minorities might be the next to be targeted, as was the case in the past. In fact, police recently arrested a group of Muslim fundamentalists that planned to kill ten teachers at an Ahmadiyya school. Ahmadis are a Muslim religious group deemed heretical by mainstream Islam.

It is unclear what will happen now, but there are growing fears that things might get out of hand. Shahbagh, a secular-oriented non-political movement named after a Dhaka neighbourhood, continues its peaceful protests and initiatives, but is losing popularity.

What appeared to be local movement inspired by the 'Arab spring' is becoming increasingly isolated and is seen as nothing but an ally of the Awami League. Various political parties, including small factions within the Islamic party, have called for dialogue, but no one has yet said on what terms.

Dhaka : The toll in fierce clashes in Bangladesh between activists of an Islamist party and law enforcers over a war-crime trial verdict has risen to 42, the authorities said. Dozens were injured in about a dozen districts of Bangladesh, Xinhua reported citing an agency.

It was not known whether all the victims were engaged in party politics. To thwart any further untoward incidents, Border Guard Bangladesh (BGB) personnel have been deployed in violence-hit cities and towns. BGB personnel also patrolled some important areas in the capital city from Thursday night.

Clashes, arson, vandalism and detention have also been reported in parts of capital Dhaka and elsewhere in the country since Thursday. The incidents of violence erupted soon after the International Crimes Tribunal (ICT)-1 pronounced the verdict Thursday afternoon, awarding death sentence to Delwar Hossain Sayeedi, a leader of the Jamaat party.

Jamaat says Sayeedi is the victim of political vendetta. In the violence since Friday, over a dozen people including Jamaat men were dead and scores including policemen and journalists injured in Dhaka and elsewhere in the country.

(Chittagong - its original Burmese name was Sittagaung - Hill Tracts the border region with nearly 100% Buddhist-Burmese and Buddhist-Yakhines in 1960s has been tragically reduced to just over 10% Buddhist today by the countless numbers of Islamic pogroms committed by the millions and millions of Bengali-Muslim settlers wholeheartedly supported by successive Bangladeshi Governments and brutally-violent Bangladeshi Islamists funded by Wahabi Saudi Arabia.

Maybe the recent burning of Muslims and their mosques and madrassas in Burma's Meikhtilar will encourage Muslims to leave Burma like the frequent Islamic-pogroms in Bangladesh are the incentives for Buddhists there to leave Bangladesh.) 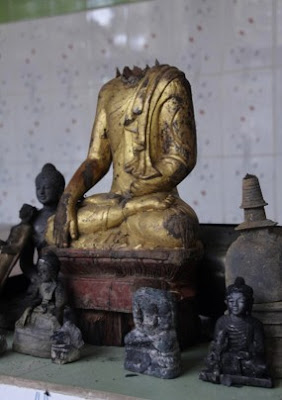 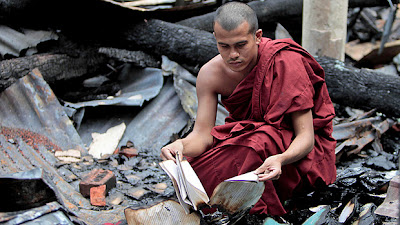 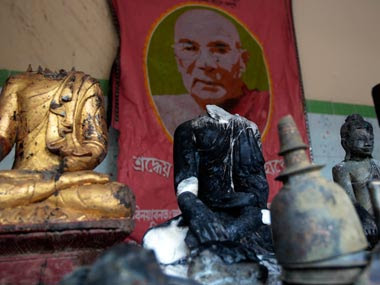