(This post is direct translation of article from Myanmar ExpressGroup.)

After the two-month-long brutal battle for KIA’s HQ Laiza Burma Army has now peacefully camped down in the area around Laiza as the uneasy peace negotiations are slowly progressing under Chinese patronage in the Chinese border town of Shweli (Ruili).

Following the army’s long-running tradition of providing essential medical treatment to the poor locals in the remote and war-torn places Burmese soldiers normally found themselves in, the army-surgeons and experienced army-medics from the battle-hardened LID-99 (99th Light Infantry Division) have been providing urgently needed medical care to the local Kachins.

While the heavily-armed riflemen of LID-99’s Light Infantry Battalions are watching the restless KIA armed-insurgents now being haplessly trapped in Laiza with nowhere else to flee their medical comrades are now treating the local Kachin brothers who have been living too bloody long under the heavy yoke of KIA insurgents who have always neglected the welfare of their own Kachin people.

Burma Army's Meikhtilar-based LID-99’s front-line soldier-doctors and medics are now taking care of the health of local Kachins living in the Dawd-phone-yang Township. The township hospital was basically abandoned for a while because of KIA threats against government’s Burmese doctors and nurses working there before.

Nowadays Fifteen to Thirty Kachin patients from the small town and the surrounding villages are gladly attending the Dawd-phone-yang hospital every day and happily receiving the tender loving care from LID-99’s doctors and medics. Only people missing in the small hospital are female army nurses as Burma army still doesn’t allow women officers to serve on the front line like KIA-infested Laiza.

According to the Burmese Chief-Surgeon from the LID-99’s Front-line HQ an elderly Kachin patient suffering from appendicitis recently was urgently operated by himself on March 18 and patient’s life has been saved and he is now slowly recovering in the said Dawd-phone-yang hospital. 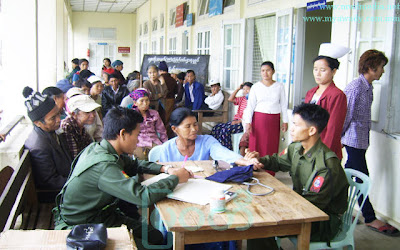 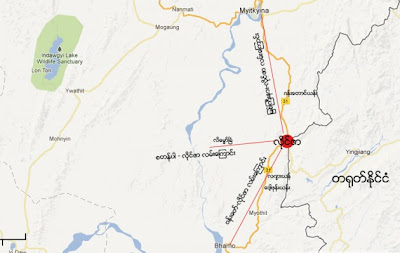