(Later part of this post is direct translation from the EMG and other Burmese blogs.) 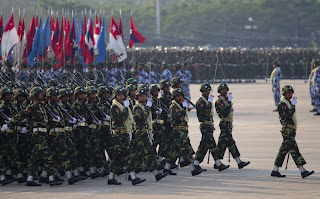 March 27 is Burma’s Armed Forces Day or formerly the Revolution Day. The much celebrated day in Burma is the commemoration of that March 27 in 1945 when the Japanese-founded BNA (Burma National Army) troops in Rangoon marched into the Rangoon’s vast Cantonment Park on now U Wisara Road.

It was the very first and also the last marching parade for young BNA. A week later the whole army took to the jungle secretly to revolt against their Japanese masters.

In his parade speech to his army General Aung San commanded them to find the nearest enemy and ruthlessly eliminate them. For the group of senior Japanese officers standing behind the podium the nearest enemy was to be the advancing British 14th army on the western front. But for the Burmese troops on the parade ground it was a code word for their Japanese masters.

The long-awaited rebellion had started and that day of March 27 had later become the celebrated Armed Forces Day of the Union of Burma. This year Burmese Army has a show of its latest hardware in addition to the traditional marching parade of the columns from army and air force and navy.

Burmese Are So Proud of Their Army Since Then

Since that day Burmese have been so proud of their army even though the Japs were finally driven out of Burma by the Field Marshall William Slim’s British 14th Army, not BNA.

But anyway having their own army is one of the proudest achievements for a people and us Burmese are no exception. I have a personal story for that.

When I was still at RIT one of my friends once invited me to his house and at his house I saw an old photograph enlarged and framed and proudly hanging on the wall of their lounge room. It was a photo of young Burmese woman trying to give a bouquet to a mounted Burmese officer participating in that March 1945 parade.

My friend’s mother came in and saw me staring at the photo and proudly recalled for me the photo’s background and told me that the young lady was she. She was so pretty and the young officer so handsome on the large horse that a newspaper reporter happened to be nearby took the photo and published it in his newspaper next day.

Now she and her whole family had proudly cherished the historic photograph. One thing she didn’t know then was that I knew the photo very well as I had seen it so many times before. But I didn’t tell her that day.

And I didn’t tell her also that the handsome Burmese officer sitting tall on the big Japanese horse was my father Bo Htun Hla leading his recently-formed battalion of young officer-cadets from the Mingaladon Military Academy.

Traditionally Burmese army commemorated the Armed Forces Day by re-enacting that marching parade into the same Cantonment Park (Now renamed Revolution Park) in Rangoon with one huge infantry column each from Army, Air Force, and Navy.

After the national capital was moved from Rangoon to Naypyidaw in 2005 the celebrated tradition continued on. But this year a new show parading the latest military hardware was included in addition to the traditional march of three armed-forces columns.

The most notable among the military hardware was the Russian-made Pechora M125 air-defense missile systems. Burmese army was known to have possessed the Pechora missiles but never publicly admitted that and this is the very first time they let the world know that they have them deadly missiles.

Especially to Thailand which used to send their latest US-supplied fighter-jets into Burmese airspace whenever they felt like it. Now Thai generals have to think carefully before violating Burma’s airspace again as these Pechoras were famous for dropping a few NATO fighter jets off the sky during the 1999 NATO’s invasion of then Serbian-controlled Bosnia and Kosovo.