(This post is direct translation of news article from the Kachin Daily News.) 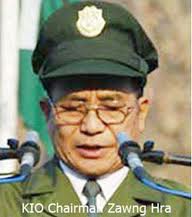 According to the local news spreading like wildfire in KIA Headquarters Laiza many KIO leaders including that famous Zaung Hara the KIO Chairman and Inbanla the KIO General Secretary had been arrested and may have already been killed by the order of either Genral Gam Shaung the KIA Chie-of-Staff or General Gun Maw the KIA Vice-Chief-of-Staff.

Since the recent abrupt-end of China-sponsored Peace Negotiations in Ruili the KIO senior leaders have not been seen or heard in Laiza. The compound of their family houses have also been declared restricted area and constantly guarded by KIA armed-men.

According to the long-time observers of so-called Kachin war of Independence very high casualties and mass desertion among the KIA ranks and files have been causing a deep crack of disagreements between the KIA (Kachin Independence Army) controlled by General Gam Shaung and its supposedly political masters KIO (Kachin Independence Organization) headed by Chairman Zaung Hara.

They also pointing out the obvious fact that KIO civilian leadership has been responding positively to the possible long-lasting peace being negotiated with Burmese has created that visible split between the KIO and the warmonger generals running KIA.

The progressive KIO civilian leaders willing to grab the peace offer from the Burmese so that they would concentrate solely on the development and progress of their Kachin people were constantly badmouthed by the KIA generals as the collaborators who are cowardly betraying the Kachin people.

Since the KIO leaders haven’t been seen for a long time now the rumours of them being arrested were first surfaced and later many KIA lower ranks have confirmed the fact that the KIO leaders were arrested just few days after the Peace Negotiations and then being detained at the notorious KIA prison in the restricted military area of Laiza.

Now the rumours of their killings have been whispered all over Laiza like wildfire and no single KIA general has so-far denied it yet.

Since two KIA leaders Zaung Hara and Inbanla were moderate Kachin leaders well respected and loved by the Kachin people their demise will definitely create serious troubles and further unrests among the various interest groups in Kachin politics.