(News articles direct from The HUFFINGTON POST on 28 September 2016.) 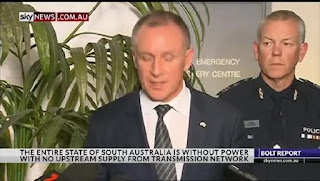 How Did An Entire State of rich Australia Lose Power for days, And What Happens Next? Most of regional South Australia will remain without power for another day, after a severe storm swept through and plunged the entire state into darkness on Wednesday.

The power outage was first reported late Wednesday afternoon and as dusk approached the whole of the state was blanketed in darkness. The local power operator, SA Power Networks, managed to restore metropolitan Adelaide south to Naracoorte and Mount Gambier overnight, as well as Port Lincoln. However, major centres such as Whyalla and Port Augusta will remain without power for today, at least.

Figures on the SA Power Networks outage site suggested 100,000 customers would remain without power until 6pm on Thursday. People in the red shaded area are supplied by damaged transmission lines – unlikely to have power tomorrow. So how exactly did this happen, and what does it mean for residents without back-up power sources and major service providers across the state? 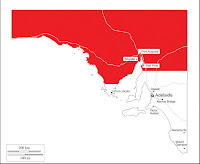 "The combination of these events has led an electricity surge, across the interconnector which then forced it to shut down as a matter of safety and to protect people and to protect the equipment," Frydenberg told ABC's 730 program. "So there will be a proper time to look at the causes of what has occurred because it's still, unfortunately, not that clear right now."

Weatherill later confirmed that 22 transmission lines were brought down in total, and some other shocking facts about the storm, including: 80,000 lightning strikes were recorded; Winds of up to 125km/hr forecast for South Australia's western coast, with Elliston expected to be the hardest hit region; 19 people have had to be rescued from lifts.

All emergency services have sufficient resources to continue operating across the state and are coordinating with the Red Cross to help those most vulnerable. "We'll be monitoring as we go through this process to ensure that those resources are supported as much as they possibly can be," said SA Police Commissioner Grant Stevens.

"Whilst this is unusual, we are prepared insofar as we should be, and that we are able to take the necessary action to ensure public safety." Hospitals across the state are running on generators and have confirmed they will be able to treat patients for the next 72 hours without power. "Hospitals are running on emergency generators at the moment," Weatherill said.

An intense low pressure system is set to hit the state on Thursday, with gale force winds of up to 140kmh in places, the Bureau of Meteorology reports. Overnight, strong wind gusts were measured across the state; 115 kmh at Ceduna at 12.15 am and 115 kmh at Cummins at 2.58am.

On Thursday, strong winds will travel across the western and central parts of the state, reaching the east by late morning, and bringing wind gusts of up to 120kmh. Showers are expected to ease on Thursday afternoon, before returning in the evening.

South Australian residents have been warned to stay off the roads and in fact not leave their homes unless it's absolutely unavoidable. Downtown Adelaide found itself gridlocked on Wednesday afternoon as commuters rushed to get home before the failure of light.

"South Australia Police are asking the community to avoid any travel this evening unless urgent with power disrupted to much of the state," the police said in a statement. "The community are being asked to remain calm, to avoid leaving their homes if they can and to be patient if on the roads.

"Police are aware that boom gates are down, some train and all tram services are disrupted -- however alternate transport arrangements are being made." Some people have also reported finding themselves stuck in lifts, like this unfortunate chap at the Channel Ten newsroom in Adelaide.

Authorities have also advised people to preserve their mobile phone batteries so they can remain in contact with loved ones. So if you're on Facebook or reading this while the power is out, shut off your apps and save the juice. "Conserve your phone battery if possible and tune in to the state emergency broadcaster, ABC, on a battery powered radio where possible for updates," the police said.

The South Australian Blackout To Become A Political Issue

Shortly after posting this tweet, Xenophon was on ABC 24 declaring the statewide emergency a political disaster. He blamed the state's focus on renewable energy as the key source of the power failure.

"How did this happen, how did an entire state black out?" Xenophon said on ABC News 24. "This is unprecedented in this rich nation. We need answers. We need an independent inquiry because this is a disgrace."

South Australia is heavily reliant on renewable energy, with 40 percent of the state's power coming from wind generation. Wind turbines cannot run in severe weather when the winds are too strong. "We've relied too much on wind. This is a problem of the failure of the interconnector (with Victoria), clearly failures of transmission," Xenophon continued.

"The great fear I have is that you will have people who need oxygen overnight who won't be able to get oxygen. What happens if people are in surgery, in the middle of delicate and life critical surgery? I don't know."

The Port Augusta power station was shut down this year as the Government turned to an increased reliance on renewable energy sources. But Weatherill denied that it was to blame for Wednesday's statewide outage and lashed out at figures trying to politicise the emergency.

"For people to be saying those things without actually being apprised of all the facts demonstrates that people are using this to play politics, rather than responding to what is a state emergency," Weatherill said. "It's regrettable that people would lead to a political criticism at this time."

A huge spike in electricity prices in July led to a report from the Grattan Institute published this week, warning of a 'canary in the coalmine' risk for South Australia's power infrastructure. "The intermittent nature of wind -- which now generates about 40 percent of South Australia's electricity -- creates challenges for the price and reliability of power generation in the state," the report warned.

S.A. Opposition Leader Steven Marshall also took aim at Weatherill, issuing him a 'please explain' in the midst of the outage.

In comments disputed by Mr Weatherill, Mr Joyce, who has previously been critical of clean energy, said the state was relying too much on renewables and wind power. "[Windpower] wasn't working too well last night, because they had blackout," he told the ABC.


Mr Xenophon said while he supported the renewable energy target - 40 per cent of South Australia's energy supply comes from renewable energy - the transition had been "reckless" and heads should roll over the blackout.