(Scott Lanman’s article direct from The BLOOMBERG on 17 September 2016.) 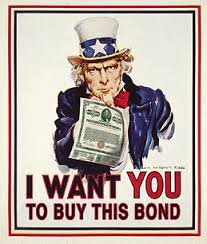 The biggest foreign holder of U.S. government debt had $1.22 trillion in bonds, notes and bills in July, down $22 billion from the prior month, in the biggest drop since 2013, according to U.S. Treasury Department data released Friday in Washington and previous figures compiled by Bloomberg. Saudi Arabia’s holdings of Treasuries also declined for a sixth straight month, to $96.5 billion.

The figures compare with official Chinese data showing that the nation’s foreign-exchange reserves were little changed in July at $3.2 trillion, though they’re down from a peak of close to $4 trillion in 2014. The reserves dropped $16 billion in August to the lowest level since 2011.


The report, which also contains data on international capital flows, showed net foreign buying of long-term securities totaling $103.9 billion in July. It showed a total cross-border inflow, including short-term securities such as Treasury bills and stock swaps, of $140.6 billion.

Net foreign selling of U.S. Treasuries was $13.1 billion in July, while foreigners scooped up a net $26.1 billion in equities, $20.7 billion of corporate debt and $38.9 billion in agency debt, according to the report. 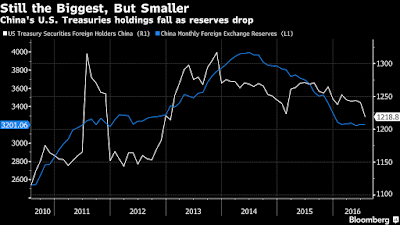 In all, central banks sold a net $17 billion. Sales had hit a record $57 billion in January. So far this year, the global bank debt dump has reached $123 billion. It's the fastest pace for a U.S. debt selloff by global central banks since at least 1978, according to Treasury Department data published Monday afternoon.

Treasuries are considered one of the safest assets in the world, but some experts say a sense of panic about the global economy drove the selloff. "It's more of global fear than anything," says Ihab Salib, head of international fixed income at Federated Investors. "There's still this fear of 'everything is going to fall apart.'"

Judging by the selloff, policymakers across the globe were hitting the panic button often and early in the year as oil prices fell, concerns about China's economy rose and stock markets were very volatile. In response, countries may be selling Treasuries to prop up their currencies, some of which lost lots of value against the dollar last year. By selling U.S. debt, central banks can get hard cash to buy up their local currency and prevent it from losing too much value.

Between December and February, China's central bank sold off an alarming $236 billion to help support its currency, which China is slowly letting become more controlled by markets and less by the government. In March, China sold $3.5 billion in U.S. Treasury bonds, Treasury data shows.

Experts say the sell off may be slowing down now that global concerns have eased. If anything, demand is still high for U.S. Treasury bonds -- it's just coming from private investors. The yield on a typical 10-year bond is just 1.76%, which is very low.

"While central banks may be selling Treasuries to support their currencies, investors seek the safety of Treasuries at the same time," says Jeff Kleintop, chief global investment strategist at Charles Schwab. 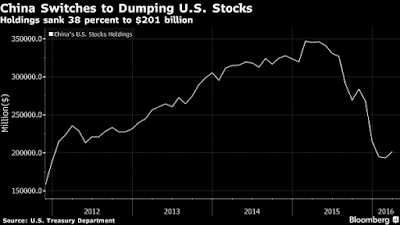 One year ago, this website was the first to observe that when combined with its offshore Belgium-held holdings, China was first slowly then fast liquidating its Treasury holdings, an observation which led us to correctly predict that China would proceed to devalue its currency, which it did shortly after.

Sure enough, shortly thereafter it became common knowledge that the PBOC, owner of the world’s biggest foreign-exchange reserves and largest offshore holder of US Treasuries, had burnt through 20% of its inventory since 2014, dumping about $250 billion of U.S. government debt and using the funds to support the yuan and stem capital outflows.

As it turns out, China wasn't selling only Treasuries. According to a Bloomberg analysis when peeking deeper at the TIC data, while China’s sales of Treasuries have slowed, its holdings of U.S. equities are now showing steep declines as Beijing proceeds to liquidate a substantial portion of its US equities.

This means that in addition to oil exporting nations such as Saudi Arabia, whose liquidation of US stocks we also predicted back in 2014 when we commented on the death of the Petrodollar, the "other" big seller of US equities has been found: China's stash of American stocks sank about $126 billion, or 38%, from the end of July through March, to $201 billion.

While it will come as no surprise that China is desperate to procure US dollars to keep its currency balanced as it intervenes now on a daily basis from prevent the USDCNY from soaring above 6.60 and "punish" those who are selling the Yuan, the observations confirms that China’s central bank remains under pressure to raise dollars and smooth the yuan’s depreciation. Only instead of selling Treasurys it has decided to sell stocks.

The equities reduction reminds investors that while China’s $1.4 trillion trove of Treasuries dwarfs its other foreign assets, it has accumulated enough U.S. stocks to influence global markets. “Selling some of its equities is a reasonable way of raising the cash needed to finance the big drawdown in reserves,” said Brad Setser, a former deputy assistant secretary for international economic analysis at the Treasury.

There is just one problem: what happens if the capital outflows persist and China runs out of US reserves to sell? Because judging by Vancouver real estate prices, and of course the relentless surge in bitcoin, China's capital outflow is only just beginning... not to mention China's $30 trillion in deposits, which dwarf any potential PBOC firewall.

Bloomberg also notes, that while the amount China unloaded is a sliver of the $23 trillion U.S. equity market, it’s significant when compared with holdings of other big investors. The largest American mutual fund, the Vanguard Total Stock Market Index Fund, oversees about $373 billion.

The Treasury doesn’t break down its data into private and official holdings. Yet China’s capital controls limit the candidates capable of amassing such a hoard of U.S. equities. Also, private Chinese ownership of foreign stocks remained stable in 2015, signaling that the selling originated from an official source, SAFE data on international investments indicate.

Given that China’s private holdings of equities abroad are smaller than the nation’s U.S. holdings as reflected in the Treasury tally, “one can reasonably infer that SAFE, whose reserve assets are not included separately in the net international investment position, holds many of the equities," Setser said.

Why did China switch from selling bonds to stocks? There are various explanations: one is that the IMF warned China to preserve a substantial liquidity buffer above $1 trillion in holdings ahead of what may be even more volatile times. Another is that Jack Lew told China in no uncertain terms to stop selling US paper during the Shanghai Accord. 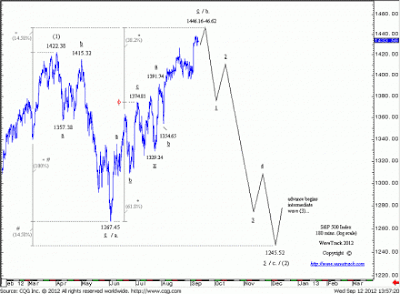 Dumping equities may prove to be a savvy move, considering that the S&P 500 Index has gone 13 months without a new high on a closing basis. China, which more than doubled its holdings of U.S. stocks during the bull market that began in 2009, wouldn’t be alone among government-affiliated sellers of investments abroad. Sovereign funds from Qatar to the United Arab Emirates and Russia have been liquidating assets since crude began tumbling in 2014.

But a bigger question is what is the message that China is sending to the world by now liquidating stocks over bonds. "The Chinese, or other people for that matter, are taking the view that sitting in U.S. equities is presumably quite risky, and I’m not surprised they’re shifting," said Fredrik Nerbrand, global head of asset allocation at HSBC Bank Plc in London. “This seems like more of a generation of cash more than anything else, and probably a de-risking of their portfolio.”

The problem for the Fed is what will happen if and when everyone else decided to tag alone with China in continuing the Great Unrotation from stocks to bonds, as the last attempt by the Fed to herd investors out of bonds and into stocks fails.


What will Yellen (The Chair of Federal Reserve) do then?