(Eric Lieberman’s article direct from The DAILY CALLER on 24 September 2016.) 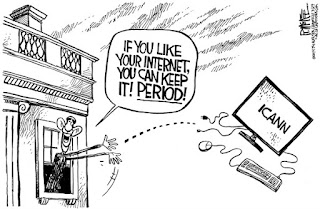 Obama Admin Wants To Surrender US Control Over Internet To Global Bureaucracy. The Obama administration is planning to relinquish American control over a central portion of Internet governance. The implications of this move range from control by an international bureaucracy to totalitarian regimes locking up entire portions of the Internet, according to experts.

The National Telecommunications and Information Administration (NTIA) is in the process of transitioning stewardship of the Internet’s domain name system (DNS) — the technical network that converts website address names into numbers — to a global entity. The DNS is essentially the “yellow pages” of web addresses. The transition is set to occur October 1.

DNS control is causing deep disagreement in the technology world, as experts in the industry and academia have vastly different opinions on the issue. Some say security and free use of the Internet is better under the umbrella of an organization that resides in America, while others assert this power should be given to a global organization.


“The biggest concern is that countries who don’t value internet freedom, who silence online speech and censor the web, will be able to directly shape internet policy,” Drew Johnson, national director of Protect Internet Freedom, told The Daily Caller News Foundation in an email.

“It is true that the United States is currently in the process of transitioning some of the core functions of internet governance outside of the government’s purview,” Ryan Hagemann, technology and civil liberties policy analyst at the Niskanen Center, wrote in an op-ed for The Hill.

In an email to TheDCNF, Hagemann argues, “If the transition is stalled, the United States will be handing over more geopolitical power over the Internet to states like Russia and Iran.” A “state-centric model for governing the emerging Internet,” like the one currently in place, will lead to less freedom, he said.

But it seems experts are making different arguments. Instead of a debate about whether a global bureaucracy should have control over the internet at all, many are simply arguing about what kind of global organization should have control. 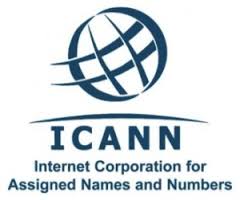 To reach another person on the Internet you have to type an address into your computer - a name or a number. That address has to be unique so computers know where to find each other. ICANN coordinates these unique identifiers across the world. Without that coordination we wouldn't have one global Internet.

Incorporated as a not for profit public-benefit organization in California, ICANN labels itself a “private-public partnership.” ICANN’s organizational structure, mission statement, and by-laws were established based on recommendations from the Department of Commerce (DoC) in 1997.

ICANN was to be responsible for the, “technical coordination of the [Domain Name System] DNS to the private sector in a manner that promotes stability and security, competition, bottom-up coordination, and representation.” To that end, ICANN uses a multi-stakeholder model and encourages EVERYONE on the Internet to participate in the decision-making processes which looks something like this:

1. A proposal is made to change the Internet infrastructure in some way (e.g. adding non-latin based character sets to the root servers).
2. The proposal is reviewed by the Government Advisory Committee with representatives from all major countries in the world. Imagine the United Nations only with geeks instead of elected officials.
3. Several different committees of engineers and technicians review the feasibility of the proposal.
4. The proposal is opened up for public comment when anyone with a device and a connection to the Internet can share opinions. If you carefully review the past decisions you will discover several brilliant ideas came directly from indiviual Internet users.
5. All of the above groups review the comments and revise the proposal accordingly.
6. Then it goes to the Board of Directors for a vote. In the case of the "dot anything goes" (as Chad called it) the vote was 13 approving, 1 opposed, and 2 abstaining.

ICANN_History_Internet_Protocol ICANN has three physical Board Meetings a year in various locations throughout the world and all stakeholders are welcome including anyone who has an interest in contributing to the evolution of the Internet. The board meeting going on right now in Singapore will end tomorrow (June 24th) and the next one is scheduled for October in Dakar, Senagal.

Most ICANN meetings are attended by stakeholders throughout the world via Internet Protocol -- what else.  ICANN sells blocks of addresses to accredited registrars (Network Solutions, Go Daddy for example) who in turn sell domain names to the consumer. The de-centralization of registrars virtually created a new global industry where there was none before. 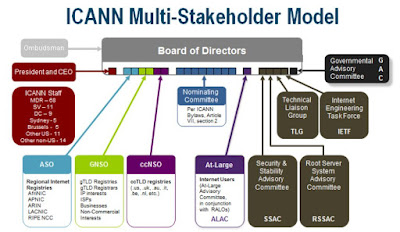 The unique identifiers for specific computerized devices and internet addresses are controlled by the Internet Corporation for Assigned Names and Numbers (ICANN). ICANN is at the top of Internet governance and oversees coordination of the DNS. Its main branch, the California nonprofit Internet Assigned Numbers Authority (IANA), manages the global pool of Internet Protocol (IP) addresses.

IP addresses are the specific series of numbers each computer is given to distinguish it from other devices. The ICANN contract with IANA is set to expire Sept. 30. “Down the road, ICANN could very easily decide to transfer oversight of ‘.mil’ domain names used by the Pentagon or to assign ‘.gov’ domain names used by top federal officials to hostile countries. There’s a threat that Russia or China could ultimately have say over America’s most sensitive websites,” Johnson warned.

Jeff Baron, a web pioneer, owned a domain name registrar business that was accredited by ICANN and given responsibility to secure domain name registrations for businesses and consumers. His business operated DNS servers for approximately one million domain names. In an exclusive interview with TheDCNF, Baron explained the risks of global transition of Internet oversight.

The Internet has an estimated $5 trillion value because it touches almost every facet of global society. At present, Baron warns, the Internet is ours to give away — a reality that changes in the event the transition occurs.

“ICANN is arguably the single most powerful institution in the world as it relates to the global economy and communication. It has oversight authority over 300 million domain names, which number is increasing every day,” he said. “ICANN will be an extremely attractive target for bad actors who desire to either enrich themselves, control others, or otherwise influence the geopolitical landscape. These bad actors could be rogue governments, powerful special interests, or other organizations.

“It’s like a ship of gold launched into a sea full of pirates. If the journey is short enough, the ship can reach its destination safely. But, as the length of the journey increases, the chances are that the gold ends up in the hands of the hijackers.”

Physical infrastructure could be in danger as well. “Shipping companies like FedEx, UPS and the postal service are dependent on the Internet for tracking shipments and ensuring delivery. Likewise, our financial infrastructure is highly dependent on the Net. Even traditional companies like food and commodity suppliers are dependent on the Internet for their supplies and delivery of the products,” Baron stressed. “If an event cut off Internet access, our finance and banking system would also grind to a halt. The stock markets could temporarily shut down and have drastic effects.”

Sen. Ted Cruz introduced legislation to prohibit NTIA and the Department of Commerce from going through with the transition. Cruz has a clock counting down the time “until Obama gives away the Internet.”

Will Internet Be Controlled By Russia & China?

Not everyone agrees with Baron and Cruz. “Part of the problem with this debate is that it is extremely technical, and some of the messaging coming from elected representatives is simply wrong,” Hagemann argues.

Mercatus Center’s Eli Dourado believes the Internet transition is more decentralized and privatized in nature, a much better scenario than allowing the U.N.’s Russia-dominated International Telecommunications Union (ITU) to take over.

“[ITU] is an agency that, among other activities, hosts standards meetings between governments and telecom companies. Russia, China, and Saudi Arabia have used this forum to advance their vision for next-generation networks,” he wrote in op-ed for The Hill.

Dourado and Hagemann worry that since the IANA contract is set to expire, countries with nefarious priorities will push for the U.N. and ITU to grant them more influence over the Internet. They call for a multistakeholder process separate from the U.N. to stave off the pressure from countries like Russia, China and Iran.

Like Baron, other industry actors are standing opposed to the transition and Hagemann and Dourado’s claims that the industry favors a global model. A coalition of civil society groups, tech experts and activists issued an August letter to Congress urging it to combat the Executive Branch’s IANA transition by utilizing the “power of the purse.” Article 1 of the Constitution grants Congress the authority to distribute funds for government purposes; because of the economic impact, the Internet could be interpreted as funds.

The coalition argues such a far-reaching decision should not be rushed. TechFreedom, which spearheaded the alliance, is not against a transition in general, but advocates for further debate.

“Too many important questions remain unanswered,” TechFreedom President Berin Szóka said before the Senate Committee on the Judiciary. “How will ICANN work after the Transition? Will existing antitrust and consumer protection laws be able to discipline ICANN? Will key provisions of ICANN’s new Bylaws stand up under California non-profit law? And most of all: is there a government property interest here?”


While Szóka is for an eventual transition, he maintains the most important argument has not been addressed: “The U.S. government clearly has always had the right to exclude others from administering this portion of the Internet.”
Posted by Hla Oo at 2:37 AM