ISIS Convoy Stranded: Kill Them Or Let Them Live?

(Tyler Durden’s articles direct from The ZERO HEDGE on 02 September 2017.) 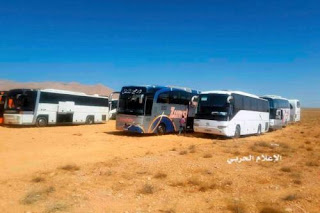 The US-led coalition fighting the Islamic State jihadist group says a 17-bus convoy of IS militants and their families is stranded in the Syrian desert.

There are some 300 gunmen and 300 civilians on the buses, which the Syrian army and Hezbollah granted safe passage and which was headed toward Iraq after the Islamist State terrorists surrendered their enclave on the Syrian-Lebanon border.

The coalition issued a statement Friday saying it has sought an unspecified solution that would save the women and children in the convoy from further suffering. It said the coalition has not attacked the convoy. But it said it had struck IS fighters and vehicles, including a tank and other armed vehicles, that tried to help the convoy move to the Iraqi border.

The coalition said its officials have contacted Russian counterparts to deliver a message to Syria’s government, which had tried to facilitate the convoy’s movement earlier this week from western Syria to an area near the Iraqi border.


Also on Friday, the coalition ousted IS from Raqa’s Old City, bringing them closer than ever to the jihadist bastion’s well-defended and densely populated heart.
The jihadist group has lost much of the territory it controlled in the two countries, and thousands of its fighters have been killed since late 2014, when the coalition was formed to defeat the group.

In a surprise move that few analysts expected, the US led anti-ISIS coalition operating in Iraq and Syria has bombed parts of the ISIS convoy previously given safe passage out of Lebanon as part of a controversial deal brokered early this week with the Lebanese Army and its allies.

Coalition spokesman Col. Ryan Dillan had previously warned that, “We will take action where necessary; those would be absolutely lucrative targets.” And it now appears the US coalition followed through by attacking the vehicles as they traveled across Syria to the Islamic State stronghold of Deir Ezzor.

The initial warning was issued in reaction to the controversial deal that followed ISIS' defeat in northeast Lebanon. Since July the Lebanese Army, Hezbollah, and the Syrian Army have attempted to root out ISIS from positions in the western Qalamun area of Syria and the Jurud Arsal border region of Lebanon.

The fierce campaign has had some degree of assistance from US special forces, acting in an advisory capacity for Lebanon's military. The territory was fully liberated Monday (August 28), but only after Lebanon struck a deal with the about 300 remaining ISIS fighters and their families which would allow them to lay down their weapons and exit through Syria in a convoy of buses (though reportedly allowed to carry light weapons such as rifles). 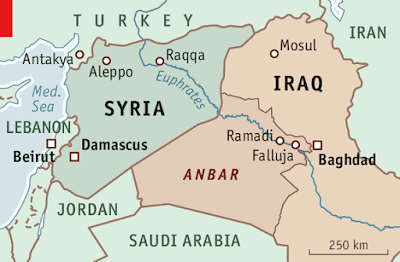 Though ISIS was clearly defeated, the deal allowed for the turnover of the bodies of 9 deceased Lebanese soldiers previously kidnapped in 2014. But the United States harshly criticized the deal soon after its announcement.

Coalition spokesman Col. Dillon said further: "We are not party to this agreement between Lebanon, Hezbollah and ISIS." He specifically targeted Syria's role in facilitating the ISIS convoy's exit: "Their claim of fighting terrorism rings hollow when they allow known terrorists to transit territory under their control. ISIS is a global threat, and relocating terrorists from one place to another is not a lasting solution.”

Hezbollah's Secretary General Hassan Nasrallah first outlined the deal in a victory speech Monday night, which he indicated involved the transportation of 26 wounded and 308 ISIS fighters, along with 331 civilian family members via buses and ambulances to Syria's eastern province. Nasrallah also declared the operation to be a complete military victory, adding that August 28th would be remembered as Lebanon's "Second Liberation Day".

But Lebanon's ceasefire agreement immediately sparked controversy in the region, especially in Iraq, whose leaders see the deal as intentionally allowing more terrorists to settle at its own border.

The Iraqi prime minister, Haider al-Abadi, faulted Syria for relocating the Islamic State fighters to its eastern frontier, which is the border with Iraq. Iraqi Prime Minister Haider al-Abadi lashed out at the brokers of the deal: “We fight the terrorists in Iraq,” he said in a speech on Tuesday. “We do not send them to Syria — we kill them in Iraq.”

Mr. Abadi called on the Syrian government to investigate the decision to relocate the Islamic State fighters. On Wednesday the US-led coalition confirmed the strike on the group of ISIS fighters which left the Lebanese border region.

Though it's unclear where exactly the strike took place, multiple reports described the convoy being stranded in the middle of Syria after air strikes destroyed the road they traveled on, while also targeting multiple vehicles which were racing to join the convoy. 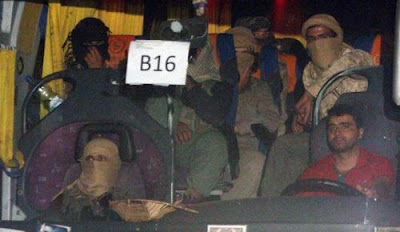 In a bizarre twist to an already unusual story, a convoy of 17 buses carrying Islamic State terrorists and their families has remained stranded since Thursday in the Syrian desert as the US, Russians, and Syrians discuss their fate: attack the convoy or allow it to pass?

Regardless of what happens, emerging photos and video depicting ISIS' retreat from Lebanon as well as their current helpless plight stuck in the middle of Syria constitutes perhaps the most significant blow to ISIS propaganda to date.

Earlier this week we reported on the unusual deal which allowed a large convoy of Islamic State fighters and their families to exit their contested stronghold along the Syrian-Lebanese border under the watch of the Lebanese and Syrian armies and Hezbollah after being defeated.

As first announced by Hezbollah's Secretary General Hassan Nasrallah in a speech Monday night, the deal involved the transportation of 26 wounded and 308 ISIS fighters, along with 331 civilian family members via buses and ambulances to Syria's eastern province. The controversial deal was struck in return for the bodies of 9 Lebanese soldiers, kidnapped by ISIS in 2014.

That convoy was allowed to enter Syria but was attacked by the US-led anti-ISIL Coalition on Wednesday as it crossed open desert on its way to the Islamic State stronghold of Deir Ezzor. Per coalition statement, the convoy wasn't attacked directly - just outlying ISIS vehicles which were attempting to join and bolster the transport. Part of the highway in front of the convoy, including a key bridge, was further targeted in order to stop its movement.

According to the latest update (released Friday afternoon) from the US coalition (@CJTFOIR), the buses remain stranded. Apparently, deliveries of food and water have been made.

After turning around and heading back west from the Abul Kamal area, the convoy of 17 buses containing hundreds of armed ISIS fighters and their families remains in the Syrian Desert between Humayma and As Sukhnah.

In accordance with the law of armed conflict, the Coalition has struck ISIS fighters and vehicles, including a tank, armed technical vehicles, and transport vehicles seeking to facilitate the movement of ISIS fighters to the border area of our Iraqi partners. Food and water have been provided to the convoy.

The ISIS convoy had reportedly been on an indirect and lengthy route through Syria, likely in order to avoid air strike, before being halted. On Friday the Syrian and Lebanese governments extracted another concession as part of negotiations over the fate of the convoy: ISIS handed over the body of an Iranian Revolutionary Guard officer to Hezbollah. 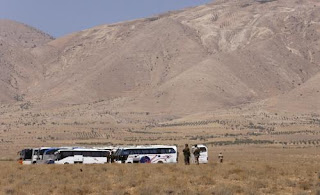 Meanwhile Hezbollah's Nasrallah revealed that he personally negotiated the deal with Syrian President Assad, who displayed initial reluctance. As Fox News reports: "I went to President Assad...I went to Damascus," he said, adding that he sought to convince Assad to let the convoy pass through government territory.

"He [Assad] told me, this is embarrassing for us, but no problem," Nasrallah told supporters gathered in eastern Lebanon for a "victory rally" to celebrate the expulsion of ISIS from the border area. "The Syrian government has put up with the embarrassment for the sake of Lebanon," he said.

The ceasefire agreement immediately sparked controversy in the region, especially in Iraq, whose leaders see the deal as intentionally allowing more terrorists to settle at its own border. The US coalition was also quick to accuse the deal's brokers as being soft on terrorism and said, "relocating terrorists from one place to another is not a lasting solution.”

But as we pointed out, the US and its allies have routinely allowed for ISIS retreats and transfers much larger in scale which appear purposefully designed to put pressure on the Syrian government. One of the more shocking admissions of such a strategy came in 2016, when then Secretary of State John Kerry was caught on audio telling a Syrian opposition gathering, which met on the sidelines of a U.N. General Assembly meeting, that Obama hoped to use ISIS as leverage against Assad. According to Kerry on the leaked audio (25:50):

"And we know that this was growing, we were watching, we saw that DAESH was growing in strength, and we thought Assad was threatened"... "(We) thought, however, we could probably manage that Assad might then negotiate. But instead of negotiating he got Putin to support him."

One knowledgeable reporter on the ground has observed that the ordeal has been a huge blow to ISIS propaganda. Robert Fisk reports, "some ISIS leaders in Syria did not want members of the group who had surrendered territory to be welcomed back into the so-called caliphate, and the militants should have fought to the death instead."

Other observers of Islamic State social media accounts have noted that ISIS members have reacted in disbelief, claiming the entire brokered deal and ISIS retreat to be a fiction of Hezbollah media.

At the moment, terrorists and their families remain sitting on chartered buses in Syrian no-man's land awaiting the decision of regional and foreign militaries controlling land and air over Syria. Will the convoy be destroyed or allowed to pass? Will the US coalition strike and kill over 300 civilian ISIS family members in the process?

Simple imprisonment could prove difficult as the ISIS militants were allowed to carry small arms as part of the deal and will surely go down fighting at this point. Or there's the remote chance that the Syrians and Hezbollah actually desire for the US to attack the convoy: the Syrian and Lebanese governments could maintain they upheld their end of the bargain (this becomes important for potential future battlefield deals brokered with other groups), while the US would claim the moral high ground of fighting terror.


Whatever scenario unfolds, this currently developing story is arguably one of the strangest to come out of recent events in the war. 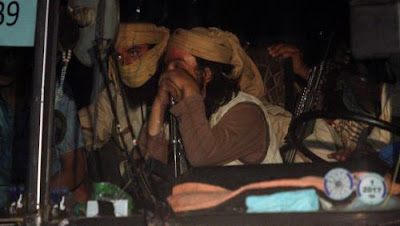 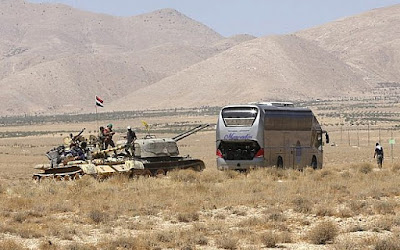