Pine Gap: The U.S. Spy Hub In The Middle Of Australia

(Ryan Gallagher’s article direct from The INTERCEPT on 20 August 2017.) 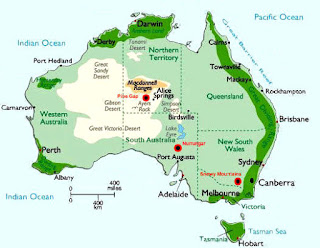 A SHORT DRIVE south of Alice Springs, the second largest population center in Australia’s Northern Territory, there is a high-security compound, code-named “RAINFALL.”

The remote base, in the heart of the country’s barren outback, is one of the most important covert surveillance sites in the eastern hemisphere. Hundreds of Australian and American employees come and go every day from Joint Defence Facility Pine Gap, as the base is formally known.

The official “cover story,” as outlined in a secret U.S. intelligence document, is to “support the national security of both the U.S. and Australia. The [facility] contributes to verifying arms control and disarmament agreements and monitoring military developments.”


But, at best, that is an economical version of the truth. Pine Gap has a far broader mission — and more powerful capabilities — than the Australian or American governments have ever publicly acknowledged.

An investigation, published Saturday by the Australian Broadcasting Corporation in collaboration with The Intercept, punctures the wall of secrecy surrounding Pine Gap, revealing for the first time a wide range of details about its function.

The base is an important ground station from which U.S. spy satellites are controlled and communications are monitored across several continents, according to classified documents obtained by The Intercept from the National Security Agency whistleblower Edward Snowden.

Together with the NSA’s Menwith Hill base in England, Pine Gap has in recent years been used as a command post for two missions. The first, named M7600, involved at least two spy satellites and was said in a secret 2005 document to provide “continuous coverage of the majority of the Eurasian landmass and Africa.”

This initiative was later upgraded as part of a second mission, named M8300, which involved “a four satellite constellation” and covered the former Soviet Union, China, South Asia, East Asia, the Middle East, Eastern Europe, and territories in the Atlantic Ocean.

The satellites are described as being “geosynchronous,” which means they are likely positioned high in orbit at more than 20,000 miles above the earth’s surface. They are equipped with powerful surveillance technology used to monitor wireless communications on the ground, such as those sent and received by cellphones, radios, and satellite uplinks.


They gather “strategic and tactical military, scientific, political, and economic communications signals,” according to the documents, and also keep tabs on missile or weapons tests in targeted countries, sweep up intelligence from foreign military data systems, and provide surveillance support to U.S. forces.

Outside Pine Gap, there are some 38 radar dishes pointing skyward, many of them concealed underneath golfball-like shells. The facility itself is isolated, located beyond a security checkpoint on a road marked with “prohibited area” signs, about a 10-minute drive from Alice Springs, which has a population of about 25,000 people.

There is a large cohort of U.S. spy agency personnel stationed at the site, including employees of the NSA, CIA, and National Reconnaissance Office, the agency that manages the spy satellites. Intelligence employees are joined by compatriots from the U.S. Army, Navy, and Air Force.

Pine Gap “plays a significant role in supporting both intelligence activities and military operations,” according to a top-secret NSA report dated from April 2013. One of its key functions is to gather geolocational intelligence, which can be used to help pinpoint airstrikes.

The Australian base has a special section known as the “geopit” for this function; it is equipped with “a number of tools available for performing geolocations, providing a broad range of geolocation capabilities … in conjunction with other overhead, tactical, fixed site systems,” notes an August 2012 NSA “site profile” of the facility.

Richard Tanter, a professor at the University of Melbourne, has studied Pine Gap for years. He has co-authored, with Bill Robinson and the late Desmond Ball, several detailed reports about the base’s activities for California-based security think tank Nautilus Institute. He reviewed the documents obtained by The Intercept and said that they showed there had been a “huge transformation” in Pine Gap’s function in recent history.

The documents “provide authoritative confirmation that Pine Gap is involved, for example, in the geolocation of cellphones used by people throughout the world, from the Pacific to the edge of Africa,” Tanter said.

“It shows us that Pine Gap knows the geolocations — it derives the phone numbers, it often derives the content of any communications, it provides the ability for the American military to identify and place in real-time the location of targets of interest.” 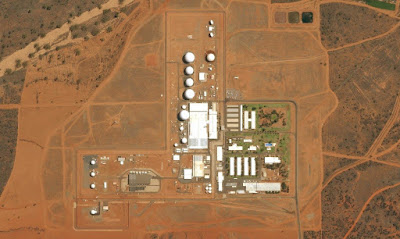 The base, which was built in the late 1960s, was once focused only on monitoring missile tests and other military-related activities in countries such as Russia, China, Pakistan, Japan, Korea, and India. But it is now doing “a great deal more,” said Tanter. It has shifted from “a national level of strategic intelligence, primarily to providing intelligence — actionable, time-sensitive intelligence — for American operations in [the] battlefield.”

In 2013, the Sydney Morning Herald reported that Pine Gap played a key role in controversial U.S. drone strikes. Over the past decade, drone attacks have killed a number of top Al Qaeda, Islamic State, and Taliban militants.

But the strikes — often taking place outside of declared war zones, in places such as Yemen, Somalia, and Pakistan — have also resulted in the deaths of hundreds of civilians, and in some cases are considered by human rights advocates to constitute potential war crimes and violations of international law.

The U.S. and its allies regularly use surveillance of communications as a tactic to track down and identify suspected militants. The NSA often locates drone targets by analyzing the activity of a cellphone’s SIM card, rather than the content of the calls — an imprecise method that can lead to the wrong people being killed, as The Intercept has previously revealed.

“It’s really like we’re targeting a cellphone,” a former drone operator told us in 2014. “We’re not going after people — we’re going after their phones, in the hopes that the person on the other end of that missile is the bad guy.” 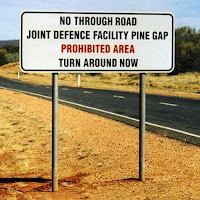 Concerns about such tactics are amplified in the era of President Donald Trump. Since his inauguration earlier this year, Trump has dramatically increased drone strikes and special operations raids, while simultaneously loosening battlefield rules and seeking to scrap constraints intended to prevent civilian deaths in such attacks.

According to analysis from the group Airwars, which monitors U.S. airstrikes, civilian casualties in the U.S.-led war against the Islamic State are on track to double under Trump’s administration.

David Rosenberg, a 23-year veteran of the NSA who worked inside Pine Gap as a team leader for more than a decade, acknowledged that the base was used to “geolocate particular electronic transmissions.”

He told The Intercept and ABC that the base helps to “provide limitation of civilian casualties by providing accurate intelligence,” and insisted that “the governments of Australia and the United States would of course want to minimize all civilian casualties.” But that reassurance is unlikely to satisfy critics.

Emily Howie, director of advocacy and research at Australia’s Human Rights Law Centre, said the Australian government needs to provide “accountability and transparency” on its role in U.S. drone operations.

“The legal problem that’s created by drone strikes is that there may very well be violations of the laws of armed conflict … and that Australia may be involved in those potential war crimes through the facility at Pine Gap,” Howie said.

“The first thing that we need from the Australian government is for it to come clean about exactly what Australians are doing inside the Pine Gap facility in terms of coordinating with the United States on the targeting using drones.”

For more than 100 years, Australia has been a close U.S. ally; the country has supported the American military in every major war since the early 1900s. This relationship was formalized in 1951, when Australia and the U.S. signed the ANZUS Treaty, a mutual defense agreement.

Australia is also a member of the Five Eyes surveillance alliance, alongside the U.S., the United Kingdom, Canada, and New Zealand. The country’s electronic eavesdropping agency, the Australian Signals Directorate, maintains extremely close ties with its American counterparts at the NSA. 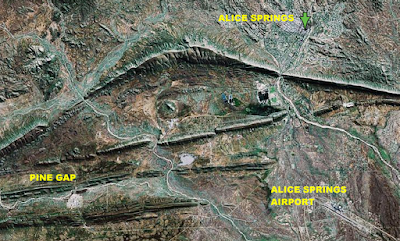 The agencies have a “mutually beneficial partnership,” according to one top-secret NSA document. While the NSA shares its “technology, cryptanalytic capabilities, and resources for state-of-the-art collection, processing and analytic efforts,” the Australians provide access to Pine Gap; they also hand over “terrorism-related communications collected inside Australia,” plus intelligence on some neighboring countries in their region, such as Indonesia, Malaysia, and Singapore.

The relationship’s foundations are strong, but some cracks may be beginning to appear. This was highlighted in late January when, after just two weeks in the Oval Office, Trump had a contentious first conversation with Australia’s prime minister, Malcolm Turnbull. Trump berated his Australian counterpart over the terms of a refugee deal and abruptly ended the call, describing it as “ridiculous” and “unpleasant.”

Meanwhile, Trump has adopted a more confrontational tone with China — Australia’s top trading partner — and he has threatened North Korea with “fire and fury” over its repeated missile tests. The situation has created a degree of uncertainty for Australia, and some in the country are pondering whether it is time to re-evaluate its traditional alliances.

“There are changing moods in the United States,” said John McCarthy, one of Australia’s most distinguished and experienced diplomats, who formerly served as the country’s ambassador to the U.S. “So, we then need to think, should we try and develop closer security relationships with other countries in Asia? Should we seek to improve our overall structural relationship with China?

“We’re entering into a very, very fluid situation in Asia,” McCarthy added. “I don’t know what the outcomes are going to be. But … we have to be very, very nimble in terms of trying to create new structures, create new relationships, to be able to look at new circumstances from a very independent security perspective, if we are to do the right thing by the Australian people over the next generation or so.”

Because of Australia’s proximity to the Korean peninsula, the North Korea issue is a particularly sensitive one. The city of Darwin in the Northern Territory is about 3,600 miles from Pyongyang, within range of an intercontinental ballistic missile strike.

As such, the implications are severe for Australia: It could be dragged into a devastating conflict if the U.S. were to become embroiled in war with Kim Jong-un’s rogue state. And despite its isolated position in the outback, Pine Gap would likely be at the forefront of the action.

“Pine Gap literally hardwires us into the activities of the American military and in some cases, that means we will cop the consequences, like it or not,” said Tanter, the University of Melbourne professor.

“Pine Gap will be contributing hugely in real-time to those operations, as well as in preparation for them. So whether or not the Australian government thinks that an attack on North Korea is either justified, or a wise and sensible move, we will be part of that,” Tanter added. “We’ll be culpable in the terms of the consequences.”


The NSA and the Australian government’s Department of Defence declined to comment. 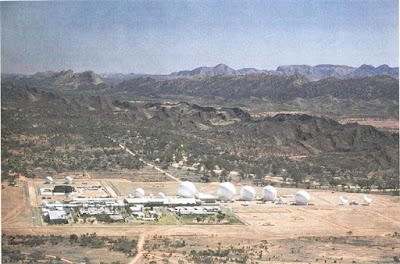