The were welcomed by Lt-Gen Aung Kyaw Zaw of the Office of the Commander-in-Chief (Army), the commander of Western Command, senior military officers, Secretary of Rakhine State government U Tin Maung Swe, Minister for Electricity, Industry and Transport U Aung Kyaw Zan and officials.

At the meeting hall of the Regional Operation Command (ROC-Sittway) Headquarters in Sittway, the command commander in recounting the terrorist attacks in Buthidaung/ Maungtaw region in August, explained the beefing up of security operations in northern Rakhine State after the occurrence of violent attacks in October 2016.


He reported and explained that by taking advantage of the reduction in the strength of security forces, beginning February 2017 due to the developing regional peace and security, extremist Bengali terrorists gathered and trained Bengali-Muslim men on Mayu Ranges to launch terrorist violent attacks against local ethnic people in June, July and August in 2017.

In responding the Bengali extremists’ organized attempts to disrupt the local administration, army has sent in the reinforcement of security forces staging security operations along Mayu Mountain Range resulting various engagements with terrorists from August 25 to September 5 in the northern Arakan area.

He also explained various measures to restore stability and return of local ethnic people to their homes, indiscriminate provision of relief supplies, and medical-healthcare services in villages in the region.

In response to the report, the Senior General gave instructions on getting timely information, close supervision by officials as there could not be any more mistakes with security affairs, cooperation in ensuring regional peace and stability, secure and firm border fencing, renovation for the longer-lasting fence for, setting up of new concertina fences, systematic deployment of security forces and providing of meals, accommodation and healthcare as humanitarian aid for local ethnics, citizens and local people in Buthidaung/ Maungtaw region.

The Senior General stressed the need for providing security with adequate strength and for following the law and disciplines. He then instructed the continued citizenship verification process for issuing NVCs to those living in the region. 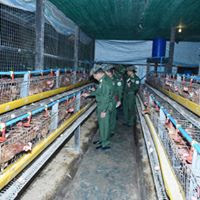 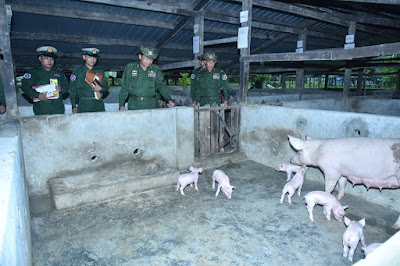 The Senior General spoke of the need to ensure sanitation and animal health at the farms, apply better means in extending DYL pigs breeding, successfully breed milk cows and local cattle, use natural fertilizers in preparing one-area rice plots as the upper layer of the soils can be lost in the process, ensure year-round availability of rare fruits and vegetables through greenhouse cultivation, extend agriculture and farming to produce till the surplus can be sold to the locals.

In the afternoon, the Senior General and party left Sittway’s Shwe-min-gan jetty for Buthidaung by high-speed Navy boats. They arrived at Buthidaung jetty in the evening and were welcomed by No.1 Border Guard Control Command Commander Police Brig-Gen Thura San Lwin, Maungtaw District Administrator U Ye Htut and officials.

The Senior General and party then proceeded and arrived at Taungbaza Village in Buthidaung Township and met cordially with Tatmadaw members and families of the local battalion LIB-552 at the battalion hall.

LIB-552 based in Taung-bazar on Kalar-panzin River is the most remote army battalion position in Northern Arakan and on August-25 4,000-strong ARSA terrorists tried unsuccessfully to overrun its HQ. Despite being under-strength since all battalion’s rifle companies were operating away from the HQ, the HQ Company and all wives and family members back at the HQ family quarters picked up their rifles and defended and finally repelled the terribly overwhelming ARSA Bengali Muslims after more than 6 hours ordeal of horrible hand-to-hand fire fights.

That extraordinary bravery was the main reason General Min Aung Hlaing came all the way from Nay Pyi Daw to dangerously remote Taung-Bazzar to honour the Burmese Buddhist soldiers of LIB-552 and their wives and family members. 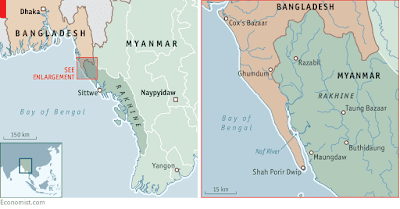 The Soldiers & Families Of LIB-552 Honoured For Bravery

SG MAH stated that as these areas are vital areas for the country, many local battalions have been deployed and set up there in Northern Arakan since the time of the Tatmadaw government. Without the local battalions the situation of the areas can become worse.

So the gallant efforts to defend the HQ against the terrorist attacks and brilliant efforts to restore regional peace and security are honoured, said Commander-in-Chief of Defence Services Senior General Min Aung Hlaing at his meeting with officers, other ranks and families of the local battalion LIB-552 in Taungbaza Village this evening. 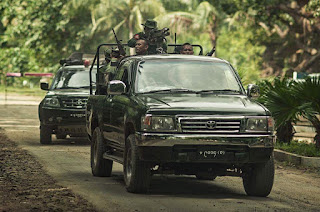 At the meeting, the Senior General said as this area was a British colony over 100 years ago, we are facing the consequences of their reckless acts till now. At that time Bengalis from Bengal region were let into the country without any restrictions. Later the Bengali population exploded and the Muslim aliens tried to seize the land of local ethnics.

The 1942 Ale-than-kyaw massacre is the worst in our country’s history. Even during the post-independence era, the Tatmadaw had to crush the Mujahidin insurgents. Recently in  Rakhine region conflicts in 2012 and 2016 October terrorist attacks broke out in the area.

During the 25 August incident extremist Bengali terrorists used their overwhelming number in launching synchronized terrorist attacks against 30 police outposts and the headquarters of this army battalion, your home battalion. According to the information exposed in connection with the incident, the attacks came out from an advanced plot involving over 4,000 terrorist Bengalis.

Before the incident Tatmadaw units had to launch area clearance operations because of the terrorist training courses conducted on Mayu mountain range, and terrorist attacks and brutal killing of our people and even their people considered as informers and collaborators.

As the local army unit at here in Taungbaza gallantly fought back a large number of terrorists, all the officers, other ranks, soldiers’ wives are honoured and documented for their bravery. Especially the wives of the soldiers were honoured once more for their maternal spirit to protect the family and children and their inborn courage to sacrifice for the family.

Similar honourable deeds of army wives picking up the rifles and defending and saving their families were also seen in areas in northern Shan State’s Laukkai region and Northern Command area. It is the result of the basic military training given to the soldiers’ wives and families at army unit HQs.

These honourable deeds stand witness to the fact that rearguard officers and other ranks and wives at the battalion HQs can successfully ward off the enemy surprise attacks as the reserve forces.


The Senior General then said collective efforts must be made to protect the minorities of Buthidaung/Maungtaw region such as Mro, Khamee, Thet and Daingnet. Area peace and stability and area control duties must be seriously carried out from the immigration point of view.

In many illegal entry cases, in which Bengalis trying to sneak into the country through various means were seized, the involvement of some officials were found. A race such as ours cannot be swallowed by the ground but only by another race. All must be loyal to the State in serving their duties, so that such cases will never happen again.

The 1982 Citizenship Law is not just for the Rakhine State crisis, its covers the whole country. So, all must do their work with loyalty. The unit should further brighten its honour and dignity through collective efforts. 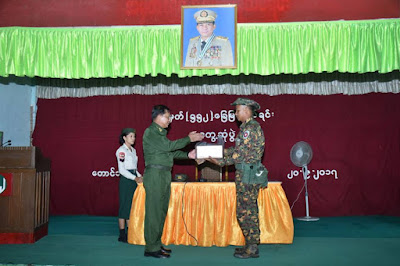 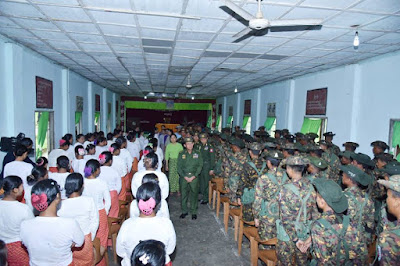 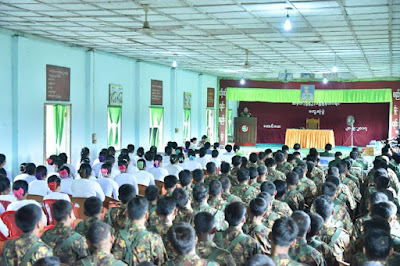 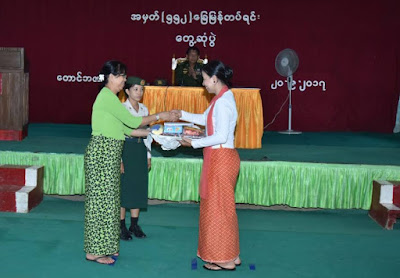