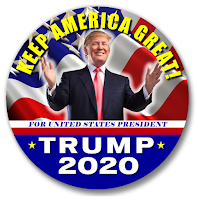 Goldman Sachs: Trump has 'narrow' shot in 'close call' election bid: President Donald Trump holds a “narrow” electoral advantage heading into 2020, according to Goldman Sachs, with his chances buoyed by a resilient U.S. economy and a crowded Democratic field in which a clear frontrunner has yet to emerge.

In a comprehensive report released late Saturday, the investment bank gave its preliminary thoughts on a general election that’s still more than a year away. While Trump reelection is far from assured, Goldman’s economists believe the president is bolstered by “the advantage of first-term incumbency and the relatively strong economic performance,” in what is sure to be a “close call” election.

Trump’s approval ratings remain mired below 50%, as new crises appear to engulf his administration on a near daily basis. Meanwhile, early reads on the November 2020 ballot suggest the incumbent faces an uphill climb in his reelection bid.


Yet with more than 20 Democrats vying to replace him, voter turnout uncertain and the likely emergence of an independent candidate suggest that “President Trump is more likely to win a second term than the eventual Democratic candidate is to defeat him,” Goldman wrote.

“While we believe the majority of market participants expect President Trump to win a second term, we note that prediction markets point in the opposite direction and imply that the Democratic candidate has a 56% probability of winning and the Republican candidate has a 44% chance,” the bank said. Political betting markets have shown mixed results, with a few recently showing a clear reelection advantage for Trump, while others predict a Democratic win.

Amid a massive field of contenders, a Democratic standard-bearer has yet to separate from the pack. Vermont Senator Bernie Sanders former Vice President Joe Biden and California Senator Kamala Harris are considered frontrunners.

Sanders has emerged as an early favorite. However, Biden — who has run into trouble because of his affectionate style with women — has yet to declare, and Harris doesn’t crack double-digits in most polls.

“At this early stage with so many candidates, it is nearly impossible to predict who among the roughly 20 announced and potential Democratic candidates will win the nomination,” Goldman’s economists said.

“That said, we would make two observations. First, while the eventual nominee often trails in the polls in the year before the election, they typically have at least some base of support and poll in the double-digits. At the moment, only [Biden and Sanders] poll nationally in double digits,” the bank wrote. Yet with so many contenders “the odds are higher than usual in this election cycle that the eventual Democratic nominee could emerge from further down the list,” according to Goldman.

“However, even in the crowded 2016 Republican primary, we note that by the time of the first debate then-candidate Trump was polling at over 20%,” the bank added. Meanwhile, the idea that former Starbucks CEO Howard Schultz could run as an independent is creating more white electoral noise.

“While it is impossible to predict whether a high-profile independent candidate (like Ross Perot in 1992) will run in 2020, if this occurred it seems more likely to benefit President Trump than the Democratic candidate,” Goldman said.

The bank surmised that “in early head-to-head polling, polls that include potential independent candidate Howard Schultz typically reduce the Democratic vote share by around 2 [percentage points] more than the Republican vote share.”

Even if a Democrat were to take the Oval Office, Goldman predicted that person would face “substantial obstacles” in enacting a far-reaching, government-centric platform that’s popular with the party’s hardcore progressive voters.

“The first obstacle is control of the Senate: while we expect the House of Representatives to remain under Democratic control after the 2020 election, Republicans appear to be at an advantage heading into the 2020 election in the Senate,” Goldman said.

“In the event that Democrats win the White House, they would need to win at least three Senate seats to take the majority, as the vice president casts the tie-breaking vote in the Senate,” the bank’s economists wrote.

Recapturing the necessary seats is plausible but unlikely, Goldman said, “given the mix of seats up for reelection in 2020. We note that prediction markets also assign only a 35% probability to a Democratic-controlled Senate.”

With all that said, Goldman’s analysis fell well short of a ringing endorsement of Trump, or his chances for reelection. The bank noted that the 2018 midterm election, in which Democrats performed strongly amid historic turnout, portend at least some trouble for the president.

“Groups that most strongly supported President Trump in 2016 made up a smaller share of total voters in 2018 than they did in 2014,” Goldman wrote. White voters without a college education form the crux of the president’s support in 2016, but that demographic’s share of the vote fell in 2018. Meanwhile, younger and non-white voters flocked to Democrats in large numbers.

“The upshot is that a core component of Trump’s base declined meaningfully as a share of the electorate in the 2018 midterm elections,” Goldman said. “A sustained lack of enthusiasm among these groups into 2020 could portend difficulty for President Trump in safeguarding his narrow majorities in battleground states,” the bank added.