Obama To Congress Muslims: “I’m Proud Of You” 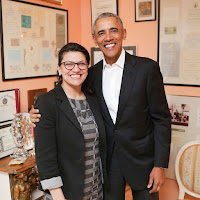 Congress Muslim Rashida Tlaib tweeted: BarackObama met with us new members of Congress and we had a thoughtful discussion about serving our country. The best part was when he looked straight at me and said, "I'm proud of you."

Tlaib is known for being a supporter of the Boycott, Divest and Sanction (BDS) Movement against Israel, which according to the definition of anti-Semitism adopted by the State Department, is an anti-Semitic movement. Tlaib is also known for her inaugural stunt over a map, literally wiping out Israel but posting a sticky note with “Palestine” written over it.


It’s no secret that former President Obama’s time in the Oval Office was marked by almost vigilant inclusion of Muslim Brotherhood supporters and a rainbow variety of Islamists. Obama is known for the $400 million palette of cash his administration air-dropped to Iran, one of the world’s foremost terror enablers.

A laundry list of failings also includes dropping huge terror-funding cases and limiting America’s ability to have authentic conversation on the source of radical Islam. Iran spends at least $7B per year on Terrorism in the Middle East.

Barack Obama is known for his-silver tongued oratory performances, but his legacy as as president did little in the way of fostering a united America. Meanwhile he has criticized President Trump for failing to be a uniting president, and yet is “proud of” a divisive freshman congresswoman.

In her short time in office, Tlaib has done more to antagonize than heal. Clarion Project’s Alex VanNess has also tracked the company Tlaib keeps, and it’s an alarming motley crew of Islamists and terror supporters, including of course Linda Sarsour. This is the woman the former U.S. President Barack Obama shares he is proud of. 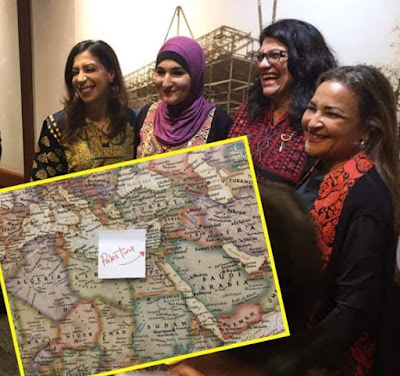 The U.S. paid Iran $400 million in cash last January (2016) when Iran released four Americans held in prison in the Islamic Republic. The payment was separate from lifting of international sanctions against Iran, which amounted to $50-100 billion frozen in accounts around the world.

As reported in the Wall Street Journal, the payment was revealed by U.S. and European officials and congressional staff who were later briefed on the operation. The Obama administration denied that the money was a payoff for the release of the Americans  but said rather that it was the first installment of a $1.7 billion settlement of an existing claim Iran had against the U.S.

The claim dated back to an arms deal conducted right before the Iranian revolution, which saw the ouster of then ruler of Iran Mohammed Reza Shah Pahlavi and the installation of the Ayatollah Ruhollah Khomeini. The claim was negotiated in the international court in The Hague.

“As we’ve made clear, the negotiations over the settlement of an outstanding claim…were completely separate from the discussions about returning our American citizens home,” said John Kirby, spokesman for the U.S. State Department.

At the time of the prisoner release, U.S. President Barack Obama did not mention the cash payment, but said only, “With the nuclear deal done, prisoners released, the time was right to resolve this dispute as well.”

U.S. officials have admitted, however, that Iranians demanded the payment so they could that Iran had gained “something tangible” from the prisoner exchange, despite the fact that the U.S. released seven Iranians detained or indicted in the U.S. for sanctions violations. Six of the Iranians released by the U.S. were dual citizens.

In addition, the U.S. agreed to drop charges against 14 Iranians whom they had requested be extradited to the U.S. The cash payment, which was reported in the Iranian press as a ransom payment, was airlifted to Iran from banks in the Netherlands and Switzerland.

Euros, Swiss francs and other currencies (dollar transaction to Iran are illegal in the U.S.) were stacked on wooden pallets and flown into Iran. Since the payment, Iran has arrested two more dual Iranian-American citizens as well as dual-nationals from France, Canada and the UK.

Four Americans being held on false charges were released in the deal as well as a fifth person who was not known to the international press. Those freed included:

Jason Rezaian, Washington Post reporter and Tehran’s bureau chief, whom Iran convicted of being a spy. In a bizarre and secretive trial, Rezaian was tried and sentenced but the sentence was never made public. The State Department called the charges “absurd,” as did the executive director of the Post, who also said the charges were “the product of fertile and twisted imaginations” of Iranian officials.

Rezaians’s wife, Yeganeh Salehi, who is a journalist for the National, an English-language newspaper in the United Arab Emirates, was also arrested but later released. She was previously not allowed to leave the country but is expected to be able to leave with her husband.

Amir Hekmati, a Marine veteran and translator, who went to Iran to visit his grandmother and other family members (as he had done twice before). Hekmati was accused of being a spy for the CIA and sentenced to death. Although his conviction was overturned three months later, Hekmati remained imprisoned.

Saeed Abedini, an Iranian-American pastor from Boise, Idaho, who  was arrested for setting up an orphanage. Abedini, who had visited Iran many times previously, was convicted in 2013 on charges of threatening Iran’s national security (due to his alleged participation in home churches, which are illegal in Iran).

Matthew Trevithick, a student, who went to Iran in September to study Dari in a center affiliated with Tehran University. Trevithick was held for 40 days and released separately. He was reported on his way home January 16.