BEWARE! The new radioactive “C” word: Muslims are always called Muslims after an anti-Muslim attack. But when Christians are murdered in a Muslim terrorist attack on churches, they are identified as “Easter worshippers” by the sharia-compliant media and their useful idiots on the left.

The “C” word is prohibited by the Democratic Party leaders including Barack Obama and Hilary Clinton. Some people believe prominent Democrats deliberately avoided using the word “Christian” when condemning bombings of churches and hotels in Sri Lanka on Easter Sunday as part of a policy to undermine Christian faith in the US.

The eight bomb attacks in Sri Lanka, which killed almost 300 people on Easter Sunday, sparked worldwide condemnation. But the way some US politicians expressed their condolences sparked a minor outcry among conservative Americans. Former President Barack Obama and the former secretary of state, Hillary Clinton, were blasted for using the term “Easter worshipers” instead of “Christians” when referring to the victims of the attacks.


Barack Obama tweeted, “The attacks on tourists and Easter worshippers in Sri Lanka are an attack on humanity. On a day devoted to love, redemption, and renewal, we pray for the victims and stand with the people of Sri Lanka.”

Hillary Clinton tweeted too, “On this holy weekend for many faiths, we must stand united against hatred and violence. I'm praying for everyone affected by today's horrific attacks on Easter worshippers and travelers in Sri Lanka.

Three Sri Lankan Christian churches were targeted by the perpetrators, implying that the Christian minority was in the crosshairs. Some commentators in the US said Obama and Clinton were in the wrong when they failed to name the religion. What the heck is an Easter worshipper? The term that these people are going to such painfully ludicrous lengths to avoid using is “Christian”.

Accusator Venditata tweeted back, “Barack Obama and Hillary Clinton referred to those killed on Easter Sunday in Sri Lanka as "easter worshipers in church". Saying the word Christians would be wrong right? The truth is that we Christians don't even care, bullshit don't incite us against the world. Receive sense.” 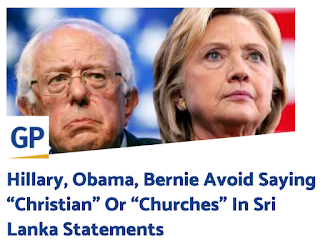 Particular ire was sparked by the fact that both US politicians didn’t hesitate to use the word “Muslim” when expressing condolences to the victims of last month’s massacre at mosques in Christchurch, New Zealand.

Nathan Ball also tweeted back, “Hillary And Obama Both Refuse To Call The SriLanka Victims Christians And They Both Won’t Call The Muslims Terrorists But Will Call Out “White Supremacy” For The Christchurch Attack Which 400% Less People Died In. They Will Do Anything To Not Recognize The Radical Islam Religion.

Notably, Obama and Clinton were not the only US figures, who used the term in remarks about the bloodshed in Sri Lanka. So did Adam Schiff, the Democrat chair of the House Intelligence Committee.

Adam Schiff tweeted too, “Horrified by the Easter Sunday bombing in Sri Lanka today, which killed over 200 people and injured hundreds more. These attacks on civilians and worshipers are cowardly and despicable. We will stand with Sri Lanka against terror.”

And the same goes for US Attorney Trent Shores. He also tweeted, “On this Easter day, my prayers are with the victims of the Sri Lanka terror attacks and their families. The victims included tourists and Easter worshipers, including Americans. May God comfort them with #grace and #peace in this troubled time.”

The criticism is based on the perception that the Democratic Party is bent on downplaying America’s Christian roots for the sake of sensibilities of people adhering to other religions. The sentiment is probably best reflected in Fox News’ coverage of the supposed “war on Christmas” in the US.

The Attacks Were On Christians, Not 'Easter Worshippers'

On Monday’s episode of “The Michael Knowles Show,” the host discusses the conscious effort by Democrats to use the phrase “Easter worshippers” instead of Christians when discussing the attack on churches in Sri Lanka by radical Muslims.

A new phrase yesterday entered into the English language that came by way of our political elites, Barack Obama and Hillary Clinton. The phrase is, “Easter worshippers”. Barack Obama responding to the terror attacks in Sri Lanka said, “The attacks on tourists and Easter worshippers in Sri Lanka are an attack on humanity. On a day devoted to love, redemption, and renewal, we pray for the victims and stand with the people of Sri Lanka.”

Attack on tourists and Easter worshippers. Does he mean Christians? I think the word that Barack Obama is looking for is “Christians.” Specifically, actually Catholics. Even the language he uses, “On a day devoted to love, redemption, and renewal, we pray for the victims and stand with the people of Sri Lanka.”

People would always say, actually, Chris Cuomo was just going off on this because we’ve been pointing this out. A number of conservatives have pointed out how ridiculous the phrase Easter worshippers is when Barack Obama should’ve used the phrase, Christian.

And what Chris Cuomo said was, oh you guys are just using code to say that Barack Obama isn’t one of us. First of all, we’re not using "code." It’s not "code" when you directly criticize somebody and you’re explicit about what you’re criticizing them for.

And we’re not even saying that Barack Obama isn’t one of us. We’re saying that he’s not even the guy that he’s pretending he is. Remember, Barack Obama ran on, oh I would go to church all the time. He’s a professed patriot, professed Christian. All of these words. But then in his behavior and in the language that he uses after he gets elected, it doesn’t seem that way. Easter worshippers. I’ve never heard that phrase before. Have you ever heard that phrase before? 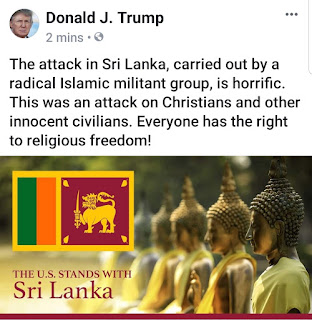 Hillary Clinton said the same thing. “On this holy weekend for many faiths, we must stand united against hatred and violence. I’m praying for everyone affected by today’s horrific attacks on Easter worshippers and travelers in Sri Lanka.” Not Christians, not Catholics, Easter worshippers.

A holy weekend for many faiths, you see, it’s not Easter Sunday, no. It’s the holy weekend for many faiths, and it was actually just those evil attacks that hurt people. It was those evil attacks. It was just hate. It was hatred and violence. It wasn’t Islamic militants waging war on Christians as they prayed on Easter Sunday… no. It was these broad terms, Easter worshippers. That’s all we can talk about.

Now, Julian Castro did the same thing by the way. He said, “On a day of redemption and hope, the evil of these attacks on Easter worshippers and tourists in Sri Lanka is deeply saddening. My prayers today are with the dead and injured, and their families. May we find grace.”

When Muslims are attacked for something, she doesn’t say, I stand with Ramadan worshippers. I stand with Hijab wearers. No, she says I stand with Muslims. But when it’s Christians, then we can’t say that.

Because we know that at the top of the oppressor pyramid is the straight white man who knows that he is a man, who is a Christian. That’s the worst oppressor in the whole world. So, when that person is the victim, he can’t be a Christian. He has to be some new phrase. He has to be an Easter worshipper. 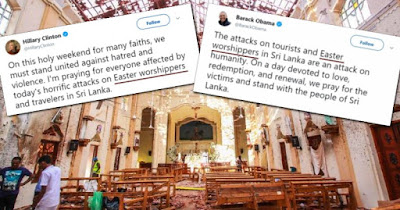 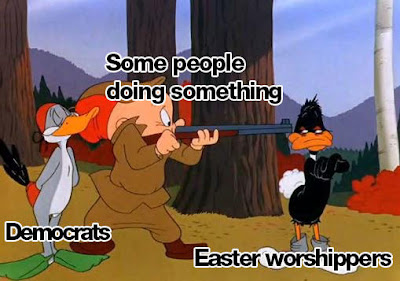