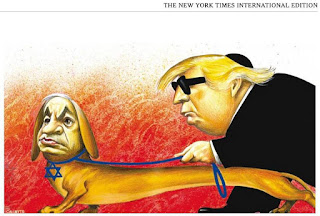 Under Fire, New York Times Finally Apologizes for Antisemitic Cartoon After Days of Failing to Do So: The New York Times has finally apologized for printing a blatantly antisemitic cartoon on the opinion pages of its international section last week.

The Times ran a cartoon on Thursday showing a blind President Donald Trump, wearing a skullcap, and being led around by Israeli Prime Minister Bibi Netanyahu–who is portrayed as a dog. The leash and collar on the Netanyahu dog character in the cartoon have a Star of David on it.

It mirrors literal Nazi propaganda against Jews and then British Prime Minister Winston Churchill, as some on social media have noted. The Times‘ decision to print this has come under near-universal criticism from across the media and political spectrum, and in response the Times on Saturday retracted and deleted the cartoon–issuing an editor’s note that did not include an apology.


“A political cartoon in the international print edition of The New York Times on Thursday included anti-Semitic tropes, depicting the prime minister of Israel as a guide dog with a Star of David collar leading the president of the United States, shown wearing a skullcap,” the initial editor’s note on Saturday retracting the image reads. “The image was offensive, and it was an error of judgment to publish it. It was provided by The New York Times News Service and Syndicate, which has since deleted it.”

While the Times retracted it, and said it was “an error of judgement to publish it,” its original editor’s note statement did not apologize for this. The Times also has not, as Breitbart News has already reported, been transparent with the public or its audience on how this happened or who in particular is responsible–or if multiple people were responsible–and what consequences that person or those people will face.

A Times spokeswoman, Danielle Rhoades-Ha, also did not answer when asked by Breitbart News about structural reforms that may be necessary as a result of this mistake.

Many, including President Trump’s son Donald Trump, Jr., ripped the Times for not being journalistically responsible not only with its initial decision to publish the cartoon but also with the organization’s handling of the retraction: “Of course they did. No one has ever held them accountable why would they do it to themselves???”

The New York Times has not fired or held anyone accountable for its decision to publish an antisemitic cartoon in its international edition. Yair Netanyahu, the Israeli prime minister’s son, also ripped the Times in an exclusive for Breitbart News.

Even so, despite the criticism, the Times held on for more than a full day after the initial retraction without an apology–and without any transparency about what was happening inside the newspaper and why this happened in the first place.

But now, with this latest statement on Sunday–three days after the publication of the antisemitic image and a full more than 24 hours after the initial retraction–the Times is finally openly apologizing for its actions and announcing an internal review and “significant changes” to its editorial process to come.

New York Times Opinion: We apologize for the anti-Semitic cartoon we published. Here’s our statement.

“We are deeply sorry for the publication of an anti-Semitic political cartoon last Thursday in the print edition of The New York Times that circulates outside of the United States, and we are committed to making sure nothing like this happens again,” the New York Times said in a statement.

The Times continued: “Such imagery is always dangerous, and at a time when anti-Semitism is on the rise worldwide, it’s all the more unacceptable. We have investigated how this happened and learned that, because of a faulty process, a single editor working without adequate oversight downloaded the syndicated cartoon and made the decision to include it on the Opinion page. The matter remains under review, and we are evaluating our internal processes and training. We anticipate significant changes.”

The Times has still not identified who that “single editor” was who somehow made the decision, unilaterally, to publish this cartoon–or whether that person has been held accountable in any way, especially whether that person still works for the Times.

The Times has also not stated whether anyone else should have been involved in the oversight process before the issue went to print, and whether anyone dropped the ball–and it has not stated what exactly is wrong with its internal processes and what changes are coming. Rhoades-Ha has still not answered any of these questions and more.

But the fact that the Times is now apologizing after initially refusing to do so, and announcing an internal review of its editorial processes that presumably if the publication believes in journalistic integrity as it says it does would be made public in its entirety upon conclusion of the review, shows just how serious a mistake this was for the so-called newspaper of record. 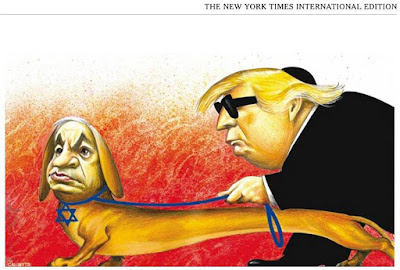