(Features article direct from the BADASS OF THE WEEK Blog.) 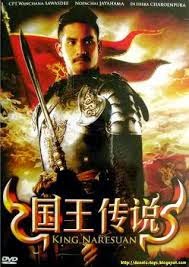 King Naresuan was a badass warlord who, while he was the reigning King of Thailand, won freedom for his people and fought off a foreign invasion by battling a tyrannical enemy king in a goddamned swordfight fought on the back of two rampaging elephants.

The tale begins in the mid-1560s, when the power-hungry King of the neighboring realm of Burma invaded Thailand, murdered the ass out of the Thai army, conquered their capital, took out the Thai King, sold half the population of the kingdom into slavery, and then rode back to Burma with Prince Naresuan as a prisoner.

The grandson of the Thai King, Prince Naresuan grew up far from home, in the royal court of Burma, spending his formative years studying alongside the Burmese nobility. When this guy wasn't seething about the treatment of his family and his beloved Thai people, he was hardcore feuding with the Burmese Crown Prince – an almost-equally tough young man who was about the same age as Prince Naresuan yet almost constantly acted like a giant dickbag to him whenever possible. Basically he was like the Malfoy to Naresuan 's Harry Potter.


Well despite having to put up with that asshole's obnoxious overly-self-entitled douchebag bullshit Naresuan sucked it up and made the most of his time as a hostage, spending every waking hour studying military tactics from Burma's greatest generals and training in groin-kickingly-hardcore martial arts that would (I think) eventually be developed into Muay Thai Kickboxing – a fighting style I think we can all agree ranks among the most badass in the world.

Well the King of Burma eventually got really sick of Naresuan hanging around learning all of his country's most intimate military secrets, so after spending seven years as an unwilling hostage in enemy lands, the 16 year-old Prince was shipped back to Thailand in exchange for his hot babe sister, who was forced to join the King's harem as a concubine.

Naresuan was allowed to serve as the Crown Prince of Siam, though this was pretty much in name alone, since Thailand at this point was little more than a sub-region of the Kingdom of Burma.

Despite the fact that Naresuan now had to serve as an obedient vassal of the man who killed his grandfather, enslaved his people, and humped his little sister, the man known as "The Black Prince" gritted his teeth and played along, assisting the Burmese in their invasion of the Khmer lands in present-day Cambodia.

He quickly became super-popular for all the badass Tony Jaa shit he dropped on his enemies, like smashing dudes in the head with a flying knee strike while his legs were on fire and then spitting gasoline on the burning enemy troops to further immolate them (or something along those lines).

Naresuan also once captured a heavily-fortified mountain castle by climbing up a sheer cliff face, sneaking into the city, and beating the shit out of everyone there, and, even better, he'd done it after gigantic idiotic frontal assaults by both the Burmese King and the Burmese Crown Prince had failed to even dent the Khmer defenses.

Tony Jaa's official website describes a cockfighting story where, after Prince Naresuan 's cock wins the battle, the Burmese Prince exclaims, "this vassal of a cock is really impudent!" Prince Naresuan responds with, "not only can this cock bet for money, it can also fight for kingdoms!" This exchange probably makes more sense in the original Thai, and is really only included here as an excuse for me to include the word cock five times in a single paragraph while talking about 16th century history.

As is the case with these things, in 1584 the Burmese got a little sick of being shown-up on the battlefield by the Black Prince and his flying-spinning side-kicks of fury and Sports Illustrated cover shots, so they did the kingly thing and tried to have him whacked by assassins when he least expected it.

Naresuan somehow found out about the plot, thwarted the ambush by elbow-striking his would-be murderers in the throat repeatedly until they died of it, and fled across Burma and crossed the river into Thailand.

When a giant fucking enemy army showed up to stop him, Naresuan stopped for a second, capped the enemy commander all the way on the other side of the river with one shot from his Portuguese-made musket in the first great sniper rifle shot in Thai history, and continued fleeing back to his capital while the rest of those jokers tried to figure out what the fuck they'd just witnessed.

Naresuan declared Thai independence almost immediately upon reaching his capital. The people of Thailand, sick of being oppressed by the Burmese tyrants, flocked to banner of their rightful ruler, coming from across the country to fight alongside the Black Prince.

Under the command of their military genius King (who, oh yeah, basically had the entire Handbook of Burmese Military Tactics committed to memory), the Thais fought off five separate invasions of their homeland between 1584 and 1593, despite being heavily outnumbered in pretty much every battle they fought.

But fighting off five invasions through military genius alone wouldn't be enough. No, Ultimate Thai Independence would require something more epic – like, something involving elephants and swords and bloodshed – and, at a place called Nong Sarai in January of 1593, they got it. It would be here that the two Crown Princes (who by this point were kings of their respective lands) finally settled their bitter personal blood feud that dated back to their days playing heated dodgeball deathmatches in elementary school.

The Battle of Nong Sarai began when the largest Burmese invasion force ever assembled marched through a narrow mountain pass into Thailand and found a small contingent of vastly outnumbered Thai troops waiting for them. The Thais, hopelessly outgunned, immediately ran for it.

Burmese chased after them, but froze in their tracks when the discovered that they'd fallen into a trap – the entire rest of the Thai army lay in wait just on the other side of the pass, and as the disorganized Burmese force blitzed through the gap they were immediately pounced on from all sides by a horde of spear-swinging Thai asskickers who resembled the bad guy at the end of Bloodsport with the broken glass stuck to his hands.

Well, sure, the plan was solid, but even a badass guerilla ambush wasn't going to be enough to make up for the overwhelming numerical superiority of the Burmese army. The Burmese King had come to Thailand with one objective – kill Prince Naresuan and deposit bite-sized chunks of him all across the Thai countryside – and he wasn't fucking around with piecemeal attacks. The battle quickly started to turn against the Thais.

It was at this point that King Naresuan personally charged, smashing into the enemy lines on the back of a gigantic fucking elephant that ran full-speed, tusks-and-balls-out, sending dudes flying fifty feet through the air like drug dealers getting blown up in a bad 80s action movie. Cleaving through the enemy in a frenzy of blood, spear-points, sword blows and ferocious tusked fury, Naresuan single-handedly cut through the enemy, when, out the corner of his eye, he saw his hated enemy across the battlefield – the King of Burma, who, it turned out, was ALSO mounted on the back of a terrifying war elephant.

There was no doubt in anyone's mind what had to happen next. Two kings. Two pachyderms. An entire country's independence on the line. ELEPHANT DUEL TIME.

The two elephants charged each other, smashing against one another in a thunderous crash of pachyderm meat and tusks. The warriors climbed out onto the heads of the animals, fighting with swords in a battle so fucking over-the-top awesome that both sides actually stopped fighting each other so that they could watch this ultimate deathmatch go down. 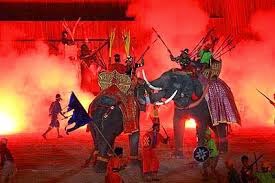 The two men bobbed and weaved, hacking furiously while the elephants kicked and tusked at each other like psychotic battle-raging Oliphaunts, each man knowing that one false step would result in death by either sword or trampling.

After a heated, gutsy battle, King Naresuan harnessed his inner getting-pissed powers, smashed the Burmese King's weapon away with a massive stroke, then swung his sword down HARD on his enemy's collarbone.

There was a brief pause, where both men stood motionless like a Kurosawa samurai duel, and then the Burmese King totally fell in half – he'd been bifurcated from his right shoulder all the way through to his left hip. Darth Maul style. The top half of him fell to the ground. The rest collapsed where it was. Blood fountain. War over. The now-leaderless Burmese army immediately turned and headed home. Thailand was free once again.

It's hard to top something like that, but King Naresuan the Great would go on to conquer Cambodia, reunite the cities of Thailand, and even go so far as to invade Burma and take a few cities away from the Burmese while those guys were having an internal crisis over who was supposed to succeed their now-dismembered king.


He died of sepsis in 1605 at the age of 50. To this day, he remains the national hero of Thailand, and every January they celebrate their national holiday – a badass celebration known only as Elephant Duel Day – in his honor.