(Feature article direct from the GLOBAL SECURITY on 15 August 2014.)

As Myanmar is located at the strategic area of South East Asia, the port and the related industry of ship building are inevitably and strategically important ones for Myanmar. But in contrast to some other regional neightbors, Myanmar's shipbulding industry is generally underdeveloped.

Myanmar has made certain progress in ship building in the past decade with the encouragement of the government. Since 1995, the Myanma shipyard has successfully built and delivered six vessels to marine companies of Indonesia and Singapore.

Official statistics show that since 1988, Myanmar has built over 30 vessels for cargo and passenger services and imported over 100 passenger and cargo vessels to improve its inland water transport. Until recently Myanmar's domestic shipbuilding industry had provided the Navy with little more than speedboats and light ampibious craft.

There is frequently some ambiguity in maritime facitlies between physical plants and administrative institutions, and there is not always a clear one-to-one walk across. And these relationships can change over time, and institutions and facilities develop.

Myanmar is and has not been the most transparent society, and the countrys modest shipbuilding industry is not well characterized in the open literature. Myanmar Naval Dockyard [aka Sinmalaik], Thilawa shipyard, and Myanma Shipyards are separately attested, but one cannot escape the nagging suspicion that these are all one and the same, more or less. 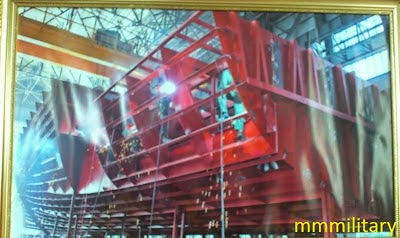 Burma’s leaders were faced with continuing arms embargoes by their traditional suppliers, and the perceived need to acquire even more weapons for the armed forces, developed a local shipbuilding capability with the aid of China.

Near the end of the 1990s, the Sinmalaik Shipyard located in Rangoon, purchased three Chinese hulls, and fitted them out as corvettes in Yangon's Sinmalaik shipyard. These 77m-long and 1105-ton displacement corvette gave the Myanmar Navy for the first time a helicopter deck-equipped vessel and an overall ship design that was poised to take the fleet beyond the territorial waters into the country’s EEZ.

Three of these corvettes were built at Rangoon’s Sinmalaik shipyard. Israel's main role in fitting out the three corvettes was apparently to provide their electronics suites. Myanmar also managed to build its own frigates, known as Aung Zeya class frigate, built by Myanmar Naval Dockyard starting in 2008. 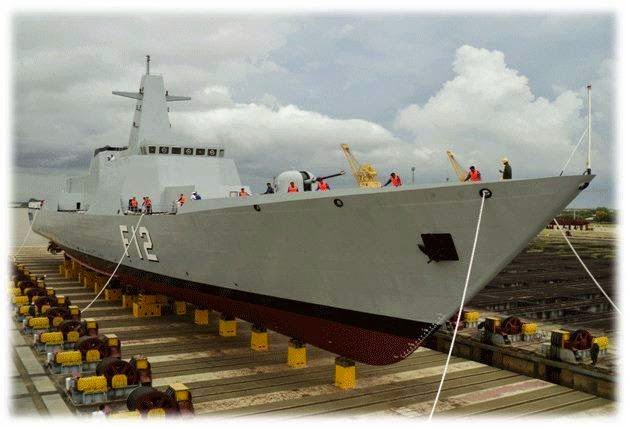 The Thilawa shipyard, contracted and built by the China National Constructional and Agricultural Machinery Import and Export Co (CAMC), was formally delivered to Myanmar for service in February 2002 after completion of its first phase of construction in three years.

The first phase of the Thilawa shipyard project, located 25 kilometers south of Yangon, covers a land of 300,000 square-meters. The Chinese side was responsible for the project design, supply of equipment, installation, technical supervision and training, while the Myanmar side only undertook the civil construction.

The project is the biggest and most comprehensive one in Myanmar contracted and built by China. The first phase of the Thilawa shipyard project possesses a production capacity of manufacturing five and repairing 50 ships a year. With advanced technological process and complete accessory, the shipyard's technological standard and degree of modernization ranked first in Myanmar. 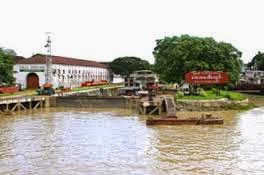 Beginning from 1850, steam vessels, stern wheeler and paddle steamer were widely used in Ayerwaddy and Chindwin rivers. After independence of the country, diesel engines with propeller propulsion came into use for the first time and it was found difficult to use propellers in shallow water regions.

Moreover, damaging of propellers, difficulty in propeller designs were inevitably unavoidable. Nowadays, vessels designed for shallow water were purchased from People’s Republic of China and were put into use.

However, due to the lack of real data of Ayerwaddy and Chindwin Rivers, these vessels were constructed mainly based on the data of Yangtze river. Therefore, problems such as overload of engine, damage of propeller and propeller shafts, and frequent replacement of propeller shaft bearings have often to be encountered and after all, these vessels are out of running condition for about four months each year.

Myanma Shipyards was established in 1970 as a ship repair yard. The shipyard construction was started in 1964 and completed in 1969. Board of Sinmalike Dockyard Administration for Union of Burma was established in 1970, to operate it as a ship repair yard for government owned vessels. In 1972, it was first reformed as the Burma Dockyards Corporation (BDC).

From 1976, the Burma Dockyards Corporation was mandated to operate commercially serving both the public and private sectors. The Government decided to reconstitute the Burma Dockyards Corporation (BDC) and Myanma Shipyards (MS) was formed as an enterprise on 31st March, 1989. Myanma Shipyards has been capable of handling to repair the various types of ocean going vessel of up to 12000 dwt since early 2005.

In 1981 Yard Area was on 161.554 Acres on the Hlaing River Bank, Simalike, Kamayut Township. Function of Myanma Shipyards are Shipbuilding, Ship repairing, Steel Fabrication and General Engineering. It was upgraded to encompass shipbuilding. It is a Government owned commercial enterprise under the Ministry of Transport and caters to both the public and private sectors of the marine industry in Myanmar.

Production department included Ship construction Division, Ship Repairs and General Engineering Division and 12000 DWT Dry Dock. Each Department had a Head of Department and they have to report to the Managing Director. Myanma Shipyards’ market is in the South East Asia region and it has many significant ships. For example, a Pollution Control Vessel was built for P.T Cumawis Ltd of Indonesia and the 20 knots - 33 meter Custom Patrol Boats built for the Myanma Customs Department. Myanma Shipyards is capable of building vessels to highest Lloyds and ABS Class Rules.


Director of the Shipbuilding Department disclosed a joint venture agreement with Dong A Shipbuilding Industry JSC of Vietnam, which was waiting for approval from Myanmar Investment Commission MIC. The Vietnamese company would hold minority stake of 49% and investment capital of US$ 81 mn. The project was expected to be in operation by 2013.