(Translation of news article direct from the ELEVEN MEDIA on 11 August 2014.)

Despite horrible hyper-inflation being persistent over last few decades Burmese government is still relying on printing high denomination Kyat notes to finance the enormous budget deficit in recently-quasi-democratic nation of sixty millions after more than six decades of Socialist and military rules.

But, according to Dr. Zaw Oo the principal-economic-adviser to the President, nowadays the notes printing is under direct control of the Union Bank of Myanmar the central bank of Burma. He also pointed out the fact that the Union Bank is constantly telling the government to keep strictly the annual budget deficit at not more than five percent of the GDP (Gross Domestic Product) of Burma.


He added that successive military governments in the past sixty years had been printing large amount of notes to satisfy the massive budget deficits over the years as there were no other alternative ways to finance the deficit. 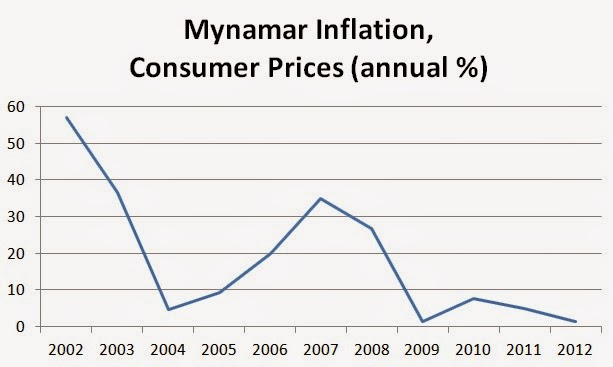 “We should not be printing as much cash as we want just because we have a good printing press. The sovereign power to print cash is now legally with the Union Bank and all money printing physically is now controlled by the Union Bank.

To print cash our Central Bank must have sufficient underlying financial resources to link and those resources right now are our foreign reserve in strong currencies like US$ and EURO. We are stockpiling those foreign reserves and printing only enough cash backed by appropriate reserve currencies.

And right now to maintain that economically sound principal we and the central bank are basically telling the government not to allow budget deficit to go beyond five percent of GDP,” said Dr. Zaw Oo. 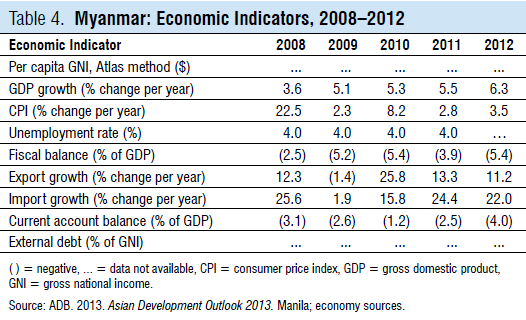 The result is many economists saying that the GDP growth has been mainly due to overly-generous money creation not real economic growth as the government has been claiming.

Even many pro-government members of parliament has been calling Thein Sein Government to scrutinize and basically kill non-essential projects proposed and being implemented by various ministries so that to considerably reduce the massive Budget deficit now standing at 9.8 trillion kyats from last four financial years.


But the government’s Finance Minister Win Shein still insists publicly that even though forecasted budget deficit for this financial year seems to be high but in reality the actual budget deficit at the end of the financial year will be much lower as most ministries have always overestimated their respective budgets.