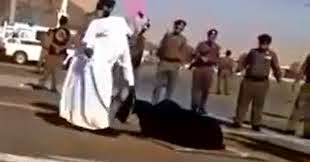 “I did not commit the murder. I did not commit the murder” cries out the woman as she was dragged off to the street to get beheaded. “I will not forgive you. I will not forgive you” she adds telling her executioners that she will not forgive them for what they were about to do to her. She insists crying out “This is injustice. This is injustice”.
The scene shows what the Saudi authorities have carried out Tuesday morning, the seventh death sentence since the beginning of 2015, this time it was a lady from Burma (Myanmar) who as the report claims was “accused of killing her seven year old step daughter using a broom stick in her vagina and anus”.
Is it possible that the young girl was molested by a family member and died to only frame this foreigner? We will never find out, but the Saudi justice system has been known for its abuses against foreigners in order to cover up for the Saudi pedigree.

The gruesome footage shows Saudi authorities publicly beheading the woman in the holy city of Mecca earlier this week. The execution is the tenth to be carried out in country in the last two weeks; setting 2015 up to be even more bloody than last year, when 87 people were punitively killed by the state.
The video shows the woman, a Burmese resident named as Lalia Bint Abdul Muttablib Basim, screaming while being dragged along the street. Four police officers then hold the woman down before a sword-wielding man slices her head then taking three blows to complete the act. The exceutioner is then found doing his usual habit in every execution: busy wiping his sword to prevent the rusting process of the blade.
Then the ambulance comes with a loud speaker that shouts out “this is the interior ministry” continuing verses from the Quran: “The punishment of those who wage war against Allah and His apostle and strive to make mischief in the land is that they should be murdered or crucified or their hands and their feet should be cut off on opposite sides or they should be imprisoned; this shall be as a disgrace for them in this world, and in the hereafter they shall have a grievous chastisement, Except those who repent before you have them in your power; so know that Allah is Forgiving, Merciful.” 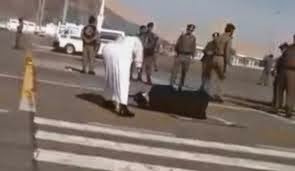 In the chilling recording, Basim, who was found guilty in a Saudi Sharia court of sexually abusing and murdering her seven-year-old step-daughter and is heard protesting her innocence until the very end.
Saudi Arabia bases its legal system on Sharia and when it comes to the death penalty it can be given for armed robbery, drug-related offences, sorcery, adultery, murder, rape and apostasy from Islam.
Beheading is widely seen in the country as the most humane means of executing but death by stoning, crucifixion, and death by firing squad is also carried out in the holiest city in Islam. Basim’s execution comes as the Saudi authorities are already under the spotlight for the public flogging of Raif Badawi, a blogger and political activist who was sentenced to 10 years in prison and a total of 1,000 lashings for insulting religious authorities.
Saudi Arabia carried out last year, nearly 87 executions, up from nine cases in 2013. Several international human rights organizations demanded that Saudi Arabia stop the implementation of those provisions and replace them with other forms of punishment.
Posted by Hla Oo at 7:57 PM