Twenty years ago one could buy an average house (3-bedder) in Sydney’s West or South-West for only about 100,000 Australian dollars. Today an average house in those West and South-west suburbs are fetching 700,000 A$.

At that inflated price one can easily buy a brand-new 4 or 5-bedroom beach house on a New York beach like the famous Rockaway Beach. But for a small old house on a bland street in a crime-ridden poor suburb in Sydney’s West or South-West? What the hell is going on in Australia, especially in Sydney?

The answer is quite simple. The Australian central bank RBA (Reserve Bank of Australia) has been printing and injecting massive amount of cash into the banking system with the good intention of reviving the rapidly slowing economy apparently due to the slowdown in China.


But the cash RBA has been freely printing and injecting into Australian economy is not going to where it was intended. Instead of the economy through businesses as bank loans the massive cash injected are going straight into the already overly-inflated real estate as mortgages because that is the only way for Australian banks to make a sure profit.

To understand that Mega-Real-Estate-Bubble-Making-Process one needs to know how commercial banks are freely creating money by mortgages and how RBA the central bank is recklessly supporting them commercial banks by supplying them daily with newly-created cheap Australian dollars. 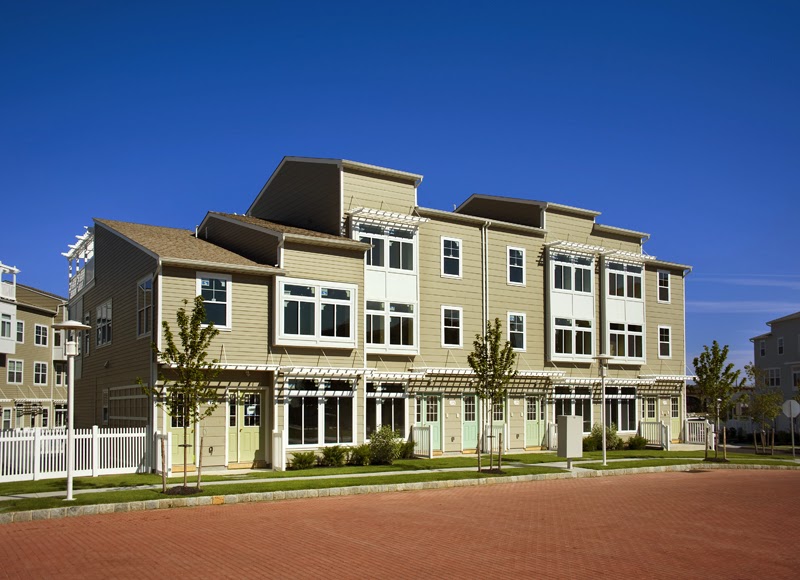 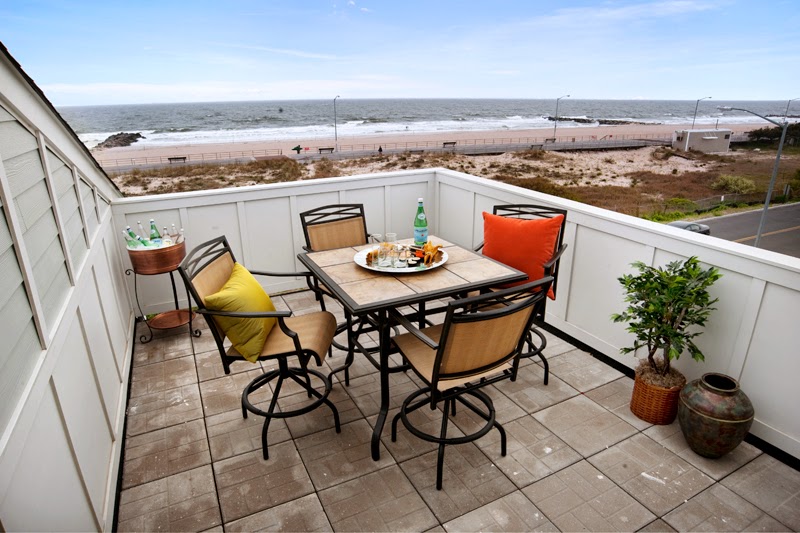 RBA’s A$ Four Billion A Day Injection Into Banking System?

In the year 2000 RBA created just A$ one billion a day roughly and injected into Australian economy. That money created and injected by RBA enabled the commercial banks to create their own money multiple of that RBA seed money. And more than 70% of that privately-created money from the banks went into the economy as business loans through the banking system and the rest as real estate mortgages.

But now in March 2015 that daily creation of money has jumped up four fold to about A$ four billion a day according to RBA’s Open Market Operations Statistics published daily. And that money is enabling commercial banks to create more and more in the form of bank loans.

But that privately-created money is not going into economy through businesses as RBA has intended. Instead most of that newly created money from commercial banks are now going straight into already massively-inflated home mortgages. A very dangerous mega-real-estate-bubble is now heating up ready to blow into pieces.

For every nation or every society the day-to-day stability of their financial system comprising the commercial banks and any other deposit-taking or payment-receiving institutions must be achieved by daily clearing the payments among them financial institutions at the end of day for many millions of individual transactions among their customers that day.

For instance if merchant A, who banks with CBA, bought $ 100,000 worth of goods from merchant B, who banks with NAB, with a check that day the CBA basically has to pay NAB $ 100,000 at the end of day. Add all those millions of daily transactions and banks owe each other quite large amount of money at the day end as they have to settle and clear all those financial transactions.

In old days the bankers sat down together at the day-end and worked out who owes what to who and settled the nets among them. Nowadays all financial institutions in Australia settle daily through RBA Payments Clearing & Settlement system. That’s where RBA’s Direct Market Operations comes in and creates and injects newly-minted billion of dollars into the system.

Every weekday in the very early morning RBA computers know the so-called “System Cash Position” from yesterday transactions which almost every day is negative meaning the banks need cash to clear among them. All commercial banks and mortgage lenders have been going full speed dangerously on all cylinders they have no spare cash large enough to settle among them. And what does RBA do?

Let the Australian financial system unsettle and unclear and thus ruining the financial integrity of Australia? No Way Hosay, our RBA eagerly has been lending the banks the cash they immediately need at lower and lower rate over the years by creating new Australian dollars and cutting interest rates.

In the year 2000 RBA created daily about one billion A$ to carry the banks alive, but now in 2015 RBA has to create daily no less than four billion to keep the Australian banks alive. 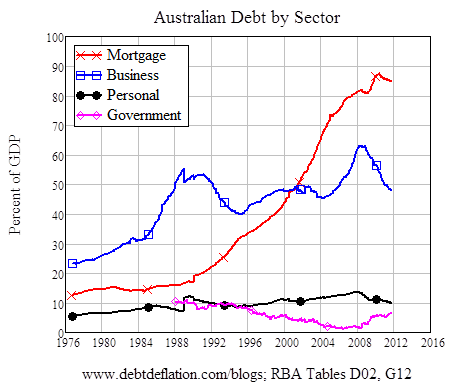 Why Don’t Banks Have Enough Cash To Clear Among Them?

To answer that question one needs to know how commercial banks like CBA and NAB and ANZ create money out of thin air and lend that newly-created money as mortgages. Most people simply believe that banks take deposits in the form of people’s savings and then lend out part of those deposits as bank loans. And that belief is completely and utterly wrong.

A commercial bank basically creates money out of thin air when it establishes a bank loan. As long as Due Diligence has been done and the debtor is credit worthy and the collateral is sufficient enough that loan will eventually be repaid with regular interest payments as default rates are generally low in normal economic situations.

As long as the commercial banks have enough cash at the day end to settle and clear among them creating reasonable amount of money as bank loans is a standard banking practice since good old days of early merchant banks in Venice or Genoa.

In a true capitalist banking system if a bank without sufficient cash backing overly created too much money by issuing too many loans it wouldn’t have enough cash to settle at day-ends and would become insolvent and collapse and many commercial banks did collapse.

But today banks do not have to worry about that problem as there is a central bank in every nation lending them cheap money to settle and clear among them at the day-ends. So what today banks do are just keep on raising the real estate valuation and lending bigger and bigger mortgages.

It is akin to a trillion dollar Ponzi scheme with Musical chair element added. Main instrument of that scammish scheme is the REPO or Repurchase Agreements. 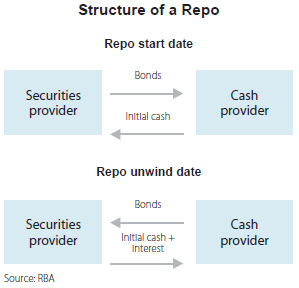 But in short term lending in overnight money market the borrowers can get large cash loans much cheaper by surrendering the collateral bonds with a promise to repurchase the same bonds next day or just a bit later. REPO is a generic name for those SELL/BUY-BACK and REPURCHASE AGREEMENTS. Figure at left is a typical structure of REPO issued by RBA.

In theory, one could buy a security with one’s own fund and then REPO out that security to raise more funds, which could be used to buy another security, which could be REPOed out for yet more funds, and so-on and so-on. Banks basically use REPO as a means or as a source of leverage to greatly enhance returns from their securities holding.

For a very long time now, every day money market funds and other large financial institutions lend much of personal and business savings to each other on the repurchase market. Until it collapsed in 2008 GFC, it was one of the biggest financial markets in the world.

REPO is a key way that money flows in a modern banking system that many economists call SHADOW BANKING. It’s called shadow banking because it’s where companies borrow and lend outside the traditional Government-insured bank system of deposits and loans and because it’s less known and less regulated than traditional banking.  In the past decade, banks moved half their business into the shadows, where they could grow faster and make more money.

But in late 1990s the world central banks led by US Federal Reserve began to use that shadow banking system or REPO market to inject their freely-printed money into their respective banking system to stimulate their economies. And that corruption of pure capitalist system by government intervention, I sincerely believe, was the main cause of 2008 GFC or the Global Financial Crisis.