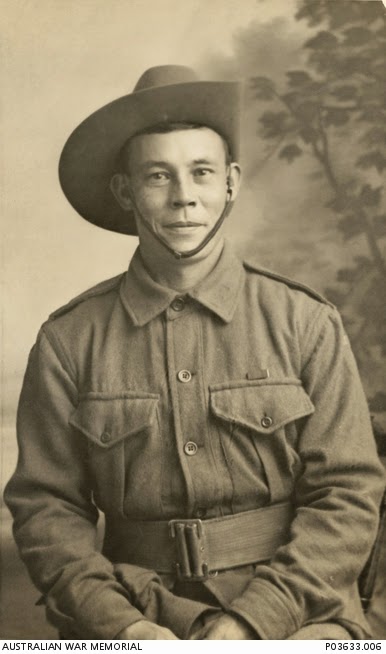 Billy Sing earned the nicknames "The Murderer" and "The Assassin" as a deadly sniper who shot more than 200 Ottoman troops during the Gallipoli campaign of World War I.

He was also part-Chinese and among thousands from non-European backgrounds, some of whom hid their identity, who joined the Australian Imperial Force to fight for their country despite being legally barred from signing up.

"He was a real Australian, an Australian at heart even though he had Chinese heritage," his great-nephew Don Smith, 62, told AFP from the small Queensland town of Clermont where Sing was born in 1886, 1,600 kilometres (1,000 miles) north of Sydney. "He put his life on the line for the rest of us so that we can have the life we have today, (like) all the guys that went to war."

Under Australia's 1909 Defence Act, "those who are not substantially of European origin or descent" were blocked from active service. But some from minority backgrounds including indigenous Australians still stepped forward, trying multiple times despite being rejected.

Of the 416,809 Australians who enlisted in WWI, more than 1,000 were Aborigines while about 400 were estimated to be of Chinese descent. The Australian War Memorial has identified about 50 indigenous people who served in Gallipoli.

"You had to enlist without saying you were of indigenous background at all otherwise you might be turned away, and some were turned away," Robin Prior of Flinders University told AFP, adding that the majority of Australians at that time were of Anglo-Celtic heritage. "It seems extraordinary now, but that was the law."

In 1917, with recruits harder to find, military orders were relaxed so only one parent needed to be of European origin. The Australian Imperial Force's Europe campaign began on April 25, 1915 when its soldiers landed at Gallipoli -- a peninsula in what is now Turkey -- together with troops from Britain, France and New Zealand. It proved to be a disastrous eight-month battle. Of the 60,000 Anzac (Australian and New Zealand Army Corps) soldiers who fought, 11,500 died. 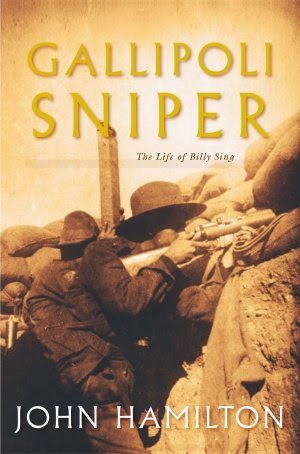 William Edward Sing, who also fought on the Western Front, was born to Chinese father John Sing and English mother Mary Ann Pugh. Growing up in rural Queensland, Sing was a skilled horse rider, kangaroo hunter and shooter. By the time he enlisted in October 1914 aged 28, he was renowned locally for his shooting prowess.
Such skills, as well as his early enlistment, may have helped him avoid some of the resistance faced by other non-European men, researchers believe. Sing arrived in Gallipoli in May 1915 with the 5th Light Horse Regiment. His sometimes "spotter" Ion Idriess wrote of his comrade in his memoir 'The Desert Column': "He is a little chap, very dark, with a jet-black moustache and a goatee beard. A picturesque-looking man-killer. He is a crack sniper of the Anzacs."
Sing was awarded the Distinguished Conduct Medal, an honour second only to the Victoria Cross, in 1916. A military despatch said Trooper 355 killed 201 Turkish troops including his Ottoman counterpart "Abdul the Terrible".
But the illnesses and wounds Sing sustained took their toll and he was in and out of hospital. Recovering from a gunshot wound in England in 1917, he married 21-year-old Scottish waitress Elizabeth Stewart before returning to the Western Front. For his service at the September 1917 battle of Polygon Wood, he was awarded the Belgian Croix de Guerre.
Sing was discharged in Australia in November 1918, with a medical report saying he had been gassed in Belgium. His wife was not believed to have returned to Australia with him. The war veteran was given land under a "soldier settlement" scheme but failed as a farmer and turned to gold prospecting. He eventually moved to Brisbane and died alone in 1943, aged 57, in a boarding house almost penniless.
While Sing was buried at Brisbane's Lutwyche War Cemetery, Smith said it was only in the 1980s that he and three others pooled money to erect a headstone on his grave.
Equals on the field 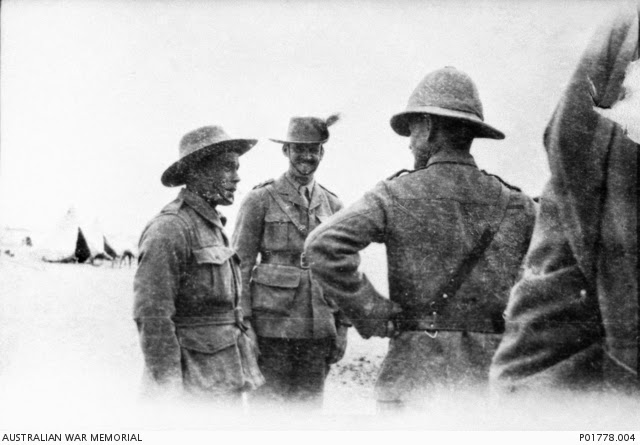 Men like Sing signed up because they were driven by a strong sense of patriotism, said Kathie Blunt of the Chinese Heritage Association of Australia. They were also generally treated the same as their peers, with privates paid six shillings a day with one shilling held back until discharge. "It was a lot of money because most of these Chinese-Australians came from very low socio-economic backgrounds, so it... was a big deal," Blunt told AFP.
But for indigenous soldiers, the comradeship they experienced during the war reverted back to the same discrimination they faced before leaving Australia. They were denied access to the settlement scheme -- with only one soldier known to have been given land, and received no official recognition until 2007.
In recent years, more Aboriginal and other troops from multicultural backgrounds have been acknowledged for their sacrifices. As Australia marks a century since the start of the Gallipoli campaign, Prior said it was important to remember their contributions. "I think we should be quite amazed that they would be prepared to fight for a country that really discriminated against them," she said.
William "Billy" Sing (From Australian War Memorial)
William “Billy” Sing was born in 1886 to an English mother and Chinese father. He and his two sisters were brought up in Clermont and Proserpine, in rural Queensland. Life on the land was tough, and from a young age Billy had to help his parents with their market garden and milk deliveries. He was also a talented horse rider and skilled at shooting.

When war broke out in 1914, Billy rushed to sign up. As one of the first to enlist, Billy was not subjected to the degree of later resistance against recruiting non-white Australians into the AIF, and he was accepted into the 5th Light Horse Regiment. He was sent to Egypt in December 1914 and onto Gallipoli in May 1915. 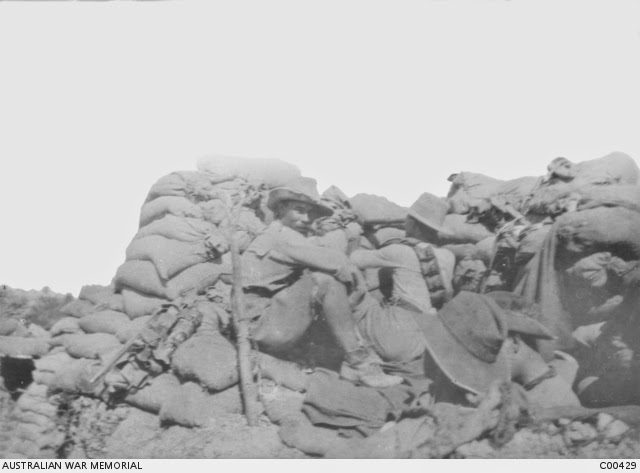 On Gallipoli, Billy was given the nickname “the Murderer” or “the Assassin” for his skill as a sniper. Fellow soldier Ion Idriess described him as, “a little chap, very dark, with a jet black moustache and a goatee beard. A picturesque looking mankiller. He is the crack sniper of the Anzacs.”

Every morning in the darkness before dawn Billy would find a place to hide and watch over the Turkish soldiers in their trenches. Waiting patiently with a “spotter”, usually Tom Sheehan, or Ion Idriess, he would wait for an enemy soldier to come into view. To avoid becoming a target of the Turkish snipers, the Australians would stay in their position until nightfall.

The ANZAC war diary for 23 October 1915 states: Our premier sniper, Trooper Sing, 2nd L.H., yesterday accounted for his 199th Turk. Every one of this record is vouched for by an independent observer, frequently an officer who observes through a telescope. Billy’s fame spread beyond the soldiers at Gallipoli, and his tally was written about in the Australian, British and American press.

The Turkish Army was also aware of Billy’s reputation. In an effort to eliminate him, they brought in their own crack shot, a man known to the Australians as “Abdul the Terrible”. It is thought Abdul came very close to fulfilling his mission. In August 1915, a single bullet, fired from the Turkish side, passed through Sheehan’s telescope and through his hands, mouth, and cheek before hitting Billy in the shoulder. In the end, it was Billy who shot and killed Abdul.

The Turkish army immediately retaliated, aiming its heavy artillery at Billy’s hiding position and completely destroying it. Fortunately for the Australian sniper and his spotter, they had already evacuated to their unit trenches.

For his efforts on Gallipoli, Billy was Mentioned in Despatches by General Sir Ian Hamilton, and awarded the British Distinguished Conduct Medal in 1916 for: Conspicuous gallantry from May to September 1915 at Anzac as a sniper. His courage and skill were most marked and he was responsible for a very large number of casualties among the enemy, no risk being too great for him to take.

The Australian soldiers were evacuated from Gallipoli in December 1915, and Billy was sent first for training in England and then to fight in France as part of the 31st Battalion. The type of warfare on the Western Front, was different to that on Gallipoli. It is unlikely that, as a sniper, Billy spent much of his time on the battlefield, nevertheless, his skills were put to good use.

In 1917, he was recommended for, though not awarded the Military Medal for his actions leading an anti-sniper fighting patrol at Polygon Wood, in Belgium. He was again Mentioned in Dispatches for gallantry, this time by the Commander of I ANZAC Corps, General Birdwood, and in 1918, awarded the Belgian Croix de Guerre.

Billy’s health suffered during his service, and he was frequently hospitalised to treat ailments ranging from serious infections to influenza. He was wounded on a number of occasions, and one gunshot wound to the leg caused him problems for years. 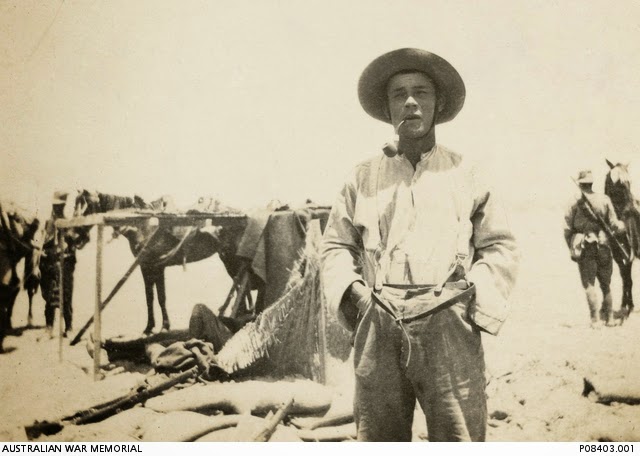 In 1917, while recuperating from illness in Britain, Billy married Elizabeth Stewart, a 21-year-old waitress from Scotland. Little is known about her or her marriage, and it is not even certain that she accompanied him back to Australia.

Billy returned to Australia in July 1918 as a submarine guard on board the troopship SS Boonah. Shortly afterwards he was permanently discharged as a result of being unfit for duty due to ongoing chest problems. He returned to Proserpine, Queensland, to a hero’s welcome, which included the presentation of a purse of sovereigns from well-wishers.

Whether or not Elizabeth had accompanied Billy back to Australia, they were permanently separated by the time he took up a Soldier Settlement farm a few years after his return. This venture failed, as did an attempt to strike it lucky in the Miclere gold fields near his property in Clermont.

In 1942 Billy moved to Brisbane to be near his surviving sister, Beatrice. A year later Billy Sing died of heart failure at the age of 57. All that remained of this one-time famous sniper was a miner’s hut (worth around £20), and 5 shillings found in his room in a boarding house. There was no sign of his medals or awards from the war. Billy was buried at Lutwyche Cemetery in Brisbane.

His headstone highlights his skills as a sniper, and reads: His incredible accuracy contributed greatly to the preservation of the lives of those with whom he served during a war always remembered for countless acts of valour and tragic carnage.
Posted by Hla Oo at 9:29 PM