(Raymond Ibrahim’s post direct from The GATESTONE INSTITUTE on 12 May 2016.)

Yazidi Girl Exposes ISIS Rape Hellhole. A new televised interview, conducted in Arabic with a Yazidi girl who endured sexual captivity at the hands of the Islamic State, was published on March 22, 2016. It appeared on "Shabaab [Youth] Talk," hosted by Ja'far Abdul.

The teenage girl, who went by the pseudonym of Birvan, was enslaved when she was 15 and endured months of captivity before she managed to escape. She is now 17. Based on the 40-minute interview, her story is as follows:

Yazidis were escaping from their war-torn village near Tel Affar, Iraq, when they were intercepted on the road by four ISIS operatives. The men swore that if the Yazidis would cooperate and answer some questions, no harm would befall them and they would be allowed to return home in peace. Asked how many Yazidis there were, Birvan says she recalls only 95 men and their families — "many, many women and children."


Before long, 17 more ISIS vehicles "full of men" appeared. The men became aggressive, ordered the Yazidis around, separated the men from the women and marched the men away — including Birvan's father, brothers, and uncles. The women and children were taken to different buildings and kept under lock and key.

ISIS fighters said they were merely moving the men to a different location. However, soon after they disappeared, Birvan heard innumerable gunshots: "The sound of those shots will never leave me," she said. She later came across her father's corpse; she never saw her brothers or uncles again and is convinced they were all slaughtered.

The women were then transferred to different locations, and stayed a few days in each. Birvan was able to stay close to her mother. ISIS members would regularly intimidate the women, fire their guns in the air, and shout "Allah Akbar" (Allah is the greatest"). "All of us," Birvan said, "would huddle together and grab hold of each other in terror."

ISIS members, according to Birvan, would tell the women that if they "try to escape we will kill you, or slaughter you. ... My mother always held me tight, terrified that after they took her entire family — husband, children, and brothers — they would take me as well."

That day arrived. Birvan said she and her mother held each other tightly and cried as ISIS forced them apart and took her mother, and all middle-aged and older women, to a different location:

The hardest moment for me that I remember is having my hand clasped to my mom's hand and then having them forcefully broken apart. This was the hardest thing — not just for me but for all the girls and children. ... They killed any woman who resisted going, they would open fire on her.

Next, all boys older than six were taken to a military camp, presumably to be converted to Islam and trained as ISIS fighters. Then Birvan's group — girls and women from the ages of 9 to 22 — were taken to another holding place in Mosul:

I remember a man who looked at least 40 years old coming and taking a ten-year-old girl. When she resisted him, he beat her severely, using stones, and would have opened fire on her if she had not gone with him. Everything against her will. 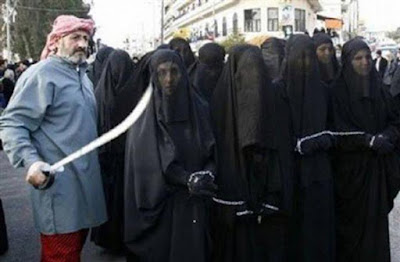 There Birvan found another 5,000 Yazidi girls enslaved. "They would come and take any girl against her will; if she refused, they would kill her on the spot.

"Anyone who walked by our room and liked us would just say 'Let's go.'" When her turn came and a man said "come," "I refused and resisted, and he beat me savagely." He purchased her, forced her to his home, which had formerly belonged to Yazidis, where, to live, she gratified him.

When asked about him, she said, "He was truly foul, truly, I mean, if you saw him, there's no difference between him and a beast. Actually animals have more mercy in their hearts than these [ISIS]."

When Ja'far Abdul asked for more details of her everyday experiences, Birvan visibly appeared uncomfortable. She kept pausing, simply repeating the word "rape." At one point she said "there were 48 ISIS members in that house, and we were two girls — two Yazidi girls" — as if to say "use your imagination" for repeated gang-rapes day after day, night after night.

She told how they had once taken her friend to an adjacent room: "you could not begin to comprehend what was happening there!" She heard her friend screaming out her name and saying "Please help me, save me!"

The only recurrent thought she had was "What wrong did these children — or I — commit to deserve all this? ... I lost my father and brothers, and then even my mother was taken from me. ... We were just children. Any girl over 9 years old, they took her — gang-raped her." 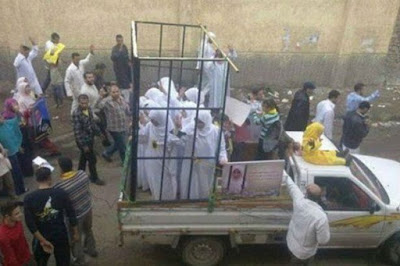 Birvan said she tried to commit suicide four times. Once she took 150 pills she found in the house; what pills she never knew. She suffered toxic poisoning but did not die. Abdul asked if anyone had taken her to a hospital. She said: "What hospital?! They beat me even more!" She also tried to drink gasoline and slice her wrists. "Life was a nightmare," she said.

She said the Yazidi women were forced to wear burqas when they were traveling outside, and mostly to hide who they were. They also compelled the girls to dress scantily inside. "Everything," she said, "was easy for them."

When asked if there was a daily routine, she said "Every day I died 100 times over. Not just once. Every hour I died, every hour. ... From the beating, from the misery, from the torture and rapes."

Birvan eventually managed to escape — "only because my determination was such that I didn't care if I got caught. Escape or death were both better than remaining there." Other Yazidi and non-Muslim women living under ISIS have not been able to escape; they are hoping we will rescue them.


(Raymond Ibrahim is the author of “Crucified Again: Exposing Islam's New War on Christians” published by Regnery in cooperation with the Gatestone Institute, April 2013.)
Posted by Hla Oo at 10:48 PM