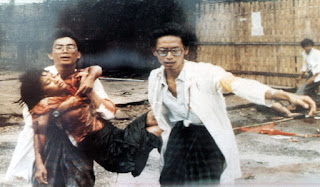 YANGON, Myanmar (AP) -- Dying from soldiers' bullets, the young protester told her father not to lay her soul to rest until democracy reigned in her homeland. It has taken 28 years, but it is done. Democracy helps fulfill long-dead Myanmar teen’s last wish.

The time was finally right to perform a funeral ceremony for 16-year-old Win Maw Oo when the National League for Democracy party of Nobel laureate Aung San Suu Kyi came to power in Myanmar this year, after decades of bitter struggle.

Her former classmates joined her parents Sunday for the rites, led by Buddhist monks. A doctor who tried to save her life was also there. On display was a famous photo of Win Maw Oo taken just after she was shot; it made the cover of Newsweek. The ceremony is intended to free the souls of the dead. Participants chanted along with the monks, spoke Win Maw Oo's name and sprinkled holy water.


Her parents did not have her remains, which is unusual in a ceremony such as this. But in Buddhism, the more important thing is to call the name of the deceased while dripping holy water and chanting with the monks. Buddhists believe that unless this happens, a soul cannot rest.

Win Maw Oo was among an estimated 3,000 people killed in 1988 during the student-led pro-democracy protests in Yangon and other parts of the country in which Suu Kyi emerged as a pro-democracy figure and her NLD party was born. Myanmar was known as Burma at the time, and Yangon, then called Rangoon, was its capital.

Win Maw Oo's parents had warned her that joining her fellow students during the uprising on the streets of the city was dangerous. Student unions were leading demonstrations against socialist dictator Gen. Ne Win, demanding a multi-party democratic system. 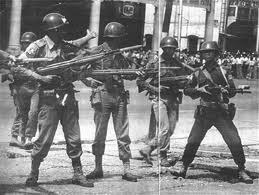 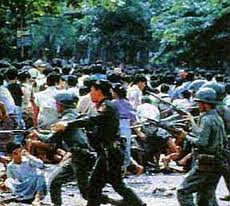 They asked her not to go.

"If they dare shoot, I am ready to die," she told them. On September 19th, the day after a military takeover, soldiers sprayed bullets into a throng of students. The crowd scattered, and Win Maw Oo collapsed. One bullet hit her right shin, another her left thigh, and a third tore through her chest, collapsing a lung.

Two doctors looking for wounded protesters spotted the teen on the street. Blood gushing from her wounds drenched the white blouse of her school uniform red. American photographer Steve Lehman snapped a picture of the tragic scene: the young schoolgirl wilting in the arms of two fear-stricken doctors, also soaked in her blood, trying to carry her to an ambulance. On the street behind them, another doctor attended to a corpse. 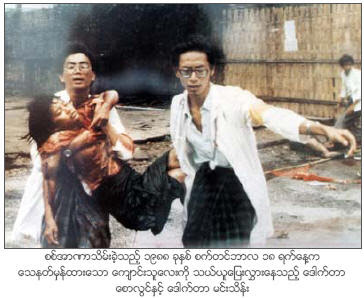 The girl's father, Win Kyu, rushed to Yangon General Hospital. He raced up and down the wards, through rows of injured or dead protesters, bodies so numerous they were lining the hallways. In the emergency room, he found his daughter, eyes closed, drawing her final breaths.

She could barely speak, Win Kyu recalled this week. "She slowly opened her eyes and looked at me, weakly." Win Kyu said. Then she motioned for him to come closer. She apologized for not heeding her parents' warning, then mustered the strength to say one last thing: "Promise me you won't hold a funeral, call my name and share merit for my soul, until this country has achieved democracy."

"I didn't know what to say, because it was a bad sign already, so I was quiet for a bit," said Win Kyu. The request was painful for him. He believed her soul would wander until they performed the ritual. "Then I thought, 'Why not grant her the wish?' She wasn't asking for herself, or for her family, but for her country. So I promised her."

Moments later, Win Maw Oo, the eldest of his six children, died. In an attempt to conceal the true scale of the day's casualties, authorities forbade doctors from allowing protesters' families to claim their bodies. Death certificates left the cause of death blank.

The day after his daughter died, Win Kyu pleaded with the surgeon who operated on her, who in turn lied to authorities that she had died of bone cancer so the body could be claimed. He retrieved his daughter's body to be cremated. But the crematoriums were so busy that unclaimed bodies were being cremated four or five at a time, and in the chaos, Win Kyu never got his daughter's ashes back.

Following the crackdown in which Win Maw Oo was killed, the country was thrust into more than two decades of harsh military rule. So Win Kyu waited.

When in 2010 the country held the first elections in 20 years, Win Kyu felt the time was not yet right, because the party sponsored by the military remained in power; the NLD boycotted those elections, saying they were unfair. When Suu Kyi was elected to parliament in 2012, he still did not feel his daughter's wish had been achieved.


Even when Suu Kyi's party scored a landslide victory in the November 2015 general election, Win Kyu said he still wasn't ready because so many of Win Maw Oo's comrades were still locked away as political prisoners. It wasn't until the new government took office in April and released all political prisoners in a general amnesty that Win Maw Oo's family finally decided that it was time. 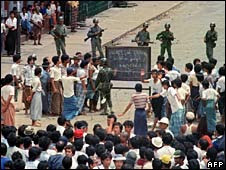 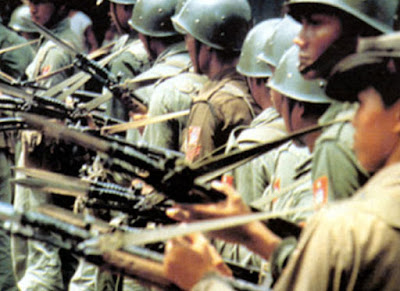 Related posts at following links:
Two Burmese Doctors: What Khin Nyunt Did To Them?
Posted by Hla Oo at 6:55 PM