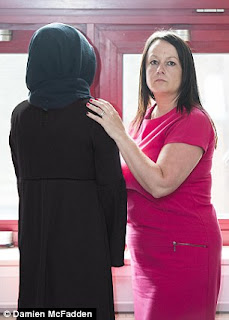 Rescued in a legal first, a Muslim girl whose father forced her a FGM operation and plotted her forced marriage to a stranger online. The 21-year-old, identified only as Zara, from Wolverhampton (pictured with PC Jody Edwards) feared ending up a slave and was told by her devout father she had to undergo female genital mutilation.

A Muslim whose father plotted to marry her to a stranger online has become the subject of a groundbreaking legal order to protect her from her parents. The 21-year-old feared ending up a slave and was told by her devout father she had to undergo female genital mutilation.

But the student was brave enough to seek help and is now the first recipient of civil court orders saving her from forced marriage and barbaric circumcision. Although both are already offences, the order allows police to stop them taking place at all. Her family faces up to five years in prison if they defy the ruling.


The woman, identified only as Zara, is said not to blame her parents and continues to live with them. Instead she faults the ‘community they were brought up in’. Police believe that by revealing Zara’s plight they can save other women from the fate she only narrowly avoided.

Born abroad, she grew up in a run-down terraced house in Wolverhampton where she claims she was bullied for refusing to wear a face-covering burqa. ‘We would go to family gatherings and they would get up and sit elsewhere and refuse to speak to me,’ she said. At 17 she received her first marriage proposal from a college friend, but the offer was withdrawn when he discovered she had not been circumcised.

‘When I started getting proposals, they always asked if I was circumcised. I would say no and the marriage wouldn’t go ahead,’ she told the Mail. ‘This kept happening. I kept on getting rejected because I wasn’t circumcised. I was told I was not a Muslim and wasn’t respectable because I hadn’t had it done. But I am a good Muslim. I fast during Ramadan, I pray five times a day, I wear a hijab. And the Koran does not say that women should be circumcised.’

Zara’s mother, who cannot speak English, was herself circumcised and had warned her daughter against the procedure. But pressure from her community and her father made her decide to look into circumcision when she turned 21.

They told her to secure her passport which, to her horror, she found contained an Islamic marriage registration form from her local mosque bearing her name. Signed by her father and uncle, it named a suitor in the Middle East she had never met. The form said the marriage would be carried out on the Skype telephone service in her absence. Zara would then be wed under Islamic law without it being registered in British law. ‘In my country, only the man has a say in the marriage. The woman is not required to give her permission,’ she said.

‘Women don’t have to be present or sign any forms for the marriage to take place because the father can sign, or anyone from the father’s family. In my country, they don’t accept a signature from a woman on her own marriage certificate.’ The form did not specify when the wedding would take place.

‘I just didn’t know whether or not I was married,’ said Zara. ‘If I was, I knew I would be circumcised immediately,’ she recalled. ‘I was crying my eyes out, begging to know if I was married. I fainted. I lost all hope for my future, I felt like it was the end of my life. Then, when the court order was made, I knew nobody could circumcise me or force me to marry. At that moment I felt safe.’

Introduced by Labour in 2007, forced-marriage protection orders are dealt with by county courts. They can be used to confiscate passports, to restrict contact with victims and to prevent marriages being arranged. The orders guarding against FGM were introduced by David Cameron in 2015.

Police officers obtained the court orders on Zara’s behalf. She said: ‘It’s not the individual parents who are at fault, it’s the community they are brought up in. The people from my dad’s community have told him he cannot be buried in the Islamic cemetery because he is not doing his job as a father. They pressurise and emotionally blackmail parents so they circumcise their children. They say it’s normal and it’s to protect the family honour.’

She appealed for girls in her position to trust the police, who she credits with ‘saving my life’. Sergeant Sharon Smith, of West Midlands Police, said: ‘People need to realise that the laws in this country are different to the laws in their country of origin.’ 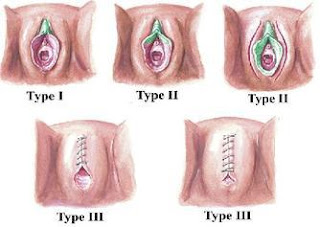 More than 1,200 cases of female genital mutilation have been recorded in England in the first three months of 2016, an indication that the Third World colonization of that country is proceeding apace. According to figures released by Health and Social Care Information Centre, the cases exclude reports in Scotland and Wales—which means that the true figure is higher.

The report, published June 7, 2016, is titled “Female Genital Mutilation (FGM), January 2016 to March 2016, Experimental Statistics Report.” It starts by explaining that the figures are “a repository for individual level data collected by healthcare providers in England, including acute hospital providers, mental health providers, and GP practices.”

Some 81 National Health Service (NHS) trusts and 12 GP practices submitted one or more FGM attendance record, the report says. Submission is mandatory for NHS acute and mental health trusts and GP practices. There were 1,242 “newly recorded” cases of FGM reported, with 2,223 total attendances where FGM was identified or a procedure for FGM was undertaken.

More than half of all cases relate to women and girls from London NHS Commissioning Region: 52 percent of newly recorded cases and 60 percent of total attendances. This is because London is now completely colonized by Muslim invaders, and whites are an absolute minority in the city.

There are four types of FGM, listed as types 1 to 4, with each type varying in the degree of the wound it inflicts. Types 1 to 3 are the most invasive and painful. Where the FGM Type was known, the report continued, Types 1 and 2 have the highest incidence (38 and 30 percent respectively). In combination, Types 1, 2 and 3 covered 90 percent of known FGM Types, with a relatively low incidence of the remaining categories.


In 2013, it was reported that there were—at that stage—some 22,000 girls in the UK being subjected to FGM every year.

Related posts at following links:
Allah Commands Muslims Chop The Clit Off Little Girls
Posted by Hla Oo at 1:33 AM