'Let's get rid of them': British Islamic preacher who has called for gays to be 'executed' was giving lectures in Orlando just weeks before nightclub massacre.  Imam Farrokh Sekaleshfar was in Orlando in last March giving public lectures. In videos online Sekaleshfar has said homosexuals should be 'executed'. 49 people were killed when gunman opened fire in Orlando gay nightclub.

An Islamic preacher who has called for gay people to be executed gave sermons in Orlando just weeks before the Pulse nightclub massacre. Farrokh Sekaleshfar - a British-born doctor and Muslim scholar - has gained a following by urging Muslims to 'get rid of' homosexuals.

And in April, he took his speech titled 'How to deal with the phenomenon of homosexuality' to the Husseini Islamic Center in Sanford, just outside Orlando, Florida. Two months later, 29-year-old Omar Mateen carried out the worst massacre in US history by opening fire on a gay club in the same city. Mateen's father has said he believes the attack was motivated by his son's homophobia.


Farrokh Sekaleshfar - a British-born doctor  - has gained a following urging Muslims to 'get rid of' homosexuals. In April, he took his speech 'How to deal with the phenomenon of homosexuality' to Orlando

Seddique Mateenthe father of Orlando Muslim shooter told NBC his son was enraged after seeing two men kissing in front of his wife and son during a visit to Miami a couple of months ago. The father then condemned the shooting - but shocked many as he said: 'God himself will punish those involved in homosexuality. This [killing] is not for the servants.'

'We have to have that compassion for people. With homosexuals, it's the same. Out of compassion, let's get rid of them now.' Sekaleshfar has not been linked to the Pulse nightclub massacre.

He also says 'forgiveness is possible' for homosexuality and that 'executions' should only be carried out in countries where Islamic law exists. On Monday morning, Sekaleshfar posted a statement on his Facebook page offering his 'sincere condolences to the friends and families of those massacred'.

'The killing of innocent life is never justified by religion,' he said. 'The perpetrator of this shooting has directly violated this holy commandment and displayed a complete disregard for the sanctity of human life and divine values.'

The Sheikh went on to address claims he has been the subject of abuse since the shooting, and that he has received death threats by people attempting to link his sermon with the shooter's motives. Previous versions of Sekaleshfar's speech posted online show him saying that gay people should die.

'Such a connection is impossible, because had the shooter listened to my lecture, he would have clearly heard me condemn hate and violence multiple times and endorse compassion towards all humankind,' the statement read.

'I invite my friends to help in supporting the humanitarian needs of the families of the victims of the shooting during such a period and share with their grief. This is an Islamic value in all cases where people are being oppressed - whoever they are.'

Sekaleshfar is currently in Australia on a speaking tour. He arrived on June 7 to speak at the Imam Husain Islamic Centre at Earlwood, in Sydney's south-west, according to the centre's website.


'His Eminence Sheikh Dr Farrokh Sekaleshfar. Speaking the entire month of the topic of: Stories of the Quran and testaments of the Mystics,' it read. Daily Mail Australia contacted the centre to confirm Sekaleshfar was still scheduled to speak, but received no comment. 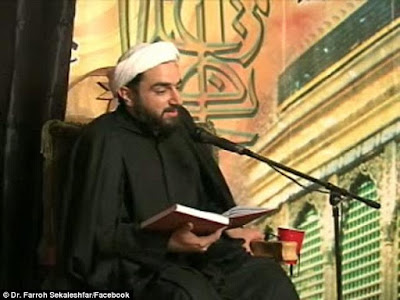 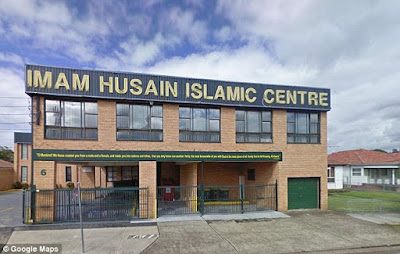 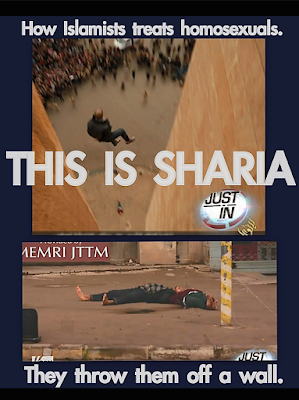 A MUSLIM cleric who has previously suggested the death sentence for gay people has left Australia after a public outcry at his entry into the country for a speaking tour. British-born Farrokh Sekaleshfar boarded a flight at Sydney Airport on Tuesday night after it emerged his visa was under review, according to the ABC.


His Sydney tour came under fire in the wake of the Orlando massacre at a gay nightclub after a video emerged of the Muslim leader preaching death as a compassionate sentence for homosexuals. Farrokh Sekaleshfar was in Australia as the guest speaker of a Sydney’s Imam Husian Islamic Centre (IHIC) for the Muslim holy month of Ramadan.

He told Lateline that he had decided to leave the country. “It’s a decision which IHIC thought it was in my best interests and for the best interests of the community. And I didn’t want to go against the committee’s decision,” he said.

“And all I want to say — because I know this got caught up in the political and everything — that never have I incited hatred or violence against human beings. And I want from the Prime Minister to the people of Australia to understand that.”

Sekaleshfar made the comments controversial comments about homosexuality at the University of Michigan three years ago. He explained to Lateline that he only believed the death penalty should be applied when homosexual acts are performed in public

“Have you … No one does that. Homosexuals don’t do that …

“If they were to do it in public — and assuming that public which saw the act were to report it — now the judiciary can come. And here the judiciary, if it’s substantiated before them: there the death sentence applies.”

He has previously made comments suggesting that death was a “compassionate” sentence for homosexuals, The Australian reported. “I can say to you we have zero tolerance for people to come to Australia who preach hatred. Zero tolerance,” Prime Minister Malcolm Turnbull said when asked about Sekaleshfar yesterday.

“His visa is a legal matter and has to be dealt with in the appropriate way, but his visa is being reviewed at the request, the direction, I should say, of the (immigration) minister, even as we speak.”

Labor Opposition Leader Bill Shorten said the cleric should never have been allowed into Australia, if he made such comments. “I don’t know how on Earth that fellow got a visa,” he told reporters in Perth yesterday. “I think the government needs to get onto it quick smart and this person, in my opinion, is not welcome in Australia holding those abhorrent views.”

The Australian revealed Sekaleshfar’s presence in Sydney as the world reeled in shock after 49 people were killed and 53 wounded by Omar Mateen when he opened fire in a popular gay Florida club on Sunday. US President Barack Obama branded it an act of terror and hate.
Posted by Hla Oo at 7:45 PM