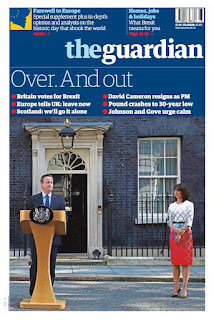 Now that millions of Britons have decided to leave the European Union, we explore what comes next. Cameron to resign by October. Markets plummet. Plethora of EU meetings planned on Monday to discuss immediate fallout. Could take up to two years to actually leave EU.

Prime Minister David Cameron has announced that he will resign in October, heeding calls by his rivals that his position was untenable having failed to convince Britons to remain in the bloc.

"I will do everything I can as prime minister to steady the ship in coming months, but I do not think it would be right for me to captain that ship," Cameron said on Friday morning during a news conference outside 10 Downing Street. There is no need for a precise timetable today, but we should aim to have a new prime minister in place by the start of Conservative conference in October."


Brexit consequences: What happens next?

On the economy, a plunge in the value of the pound and share prices is expected in the coming days, which would cause the Bank of England to raise interest rates. Indeed, the British pound fell to its lowest level in more than 30 years during the vote as a victory for Leave looked increasingly likely. Markets also plummeted as a Brexit was confirmed.

Article 50 of the Lisbon Treaty, which guides member states wishing to leave the EU, is a vague map towards the exit door. Cameron has previously said that in case of a Leave victory, the government would invoke this article immediately and start the long and complicated Brexit process.

"There is no turning back if we leave," he wrote in a Telegraph article. "If we choose to go out of the EU, we will go out - with all of the consequences that will have for everyone in Britain."

Once Article 50 is invoked, it could take Britain up to two years to actually leave the EU. During the two-year negotiation period, EU laws would still apply to the UK. The UK would continue to participate in other EU business as normal, but it would not participate in internal EU discussions or decisions about its own withdrawal.

Once Article 50 is triggered, the terms of Brexit will be negotiated not by British politicians or diplomats, but by the other 27 nations of the EU. And, when the members are ready, they will present the British government with a departure agreement on a "take it or leave it" basis.

"This is an unprecedented situation, but we are united in our response," they said. The four said they expected Britain to "give effect to this decision ... as soon as possible," by enacting article 50 of the Lisbon treaty. European affairs ministers will meet in Luxembourg to lay the groundwork for Brexit talks at the EU summit on June 28-29. Talks start at 12:30 GMT.

The Merkel-Hollande meeting could be the occasion to announce plans for a long-rumoured Franco-German initiative on a better integrated defence and security strategy for Europe. The leaders are seeking to use the plan to dispel doubts on the EU project unleashed by the British vote campaign.

The 28 EU leaders - still including Cameron - will meet on June 28 and 29 in Brussels to digest and debate the results of Thursday's Leave vote. It was originally due to be held on June 23 but was postponed after the British referendum date was announced.

On July 1, the Netherlands hands over the EU's six-month rotating presidency to the relatively inexperienced Slovakia, which now must lead the negotiations towards Brexit. Britain had been due to take the helm at the end of 2017 but will now give that up. EU civil servants will delay summer holidays to begin the painstaking legal work to bring about Brexit.


The official British divorce from Europe would take at least two years. But EU president Donald Tusk has warned that the whole process of negotiating trade and immigration deals with a non-EU Britain could take seven years in all. 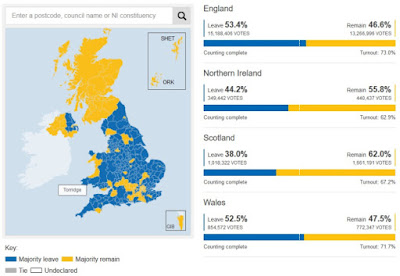 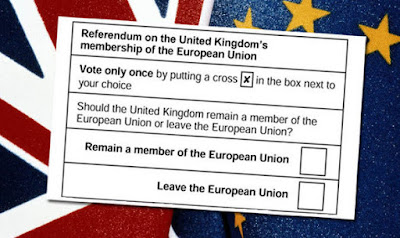 The media elites are somewhat right that the Brexit victory was about the UK voters’ disdain for globalization, immigration, and lost pride, but the real cause of the British asking for an EU divorce was the $46.6 billion in hard costs for intangible benefits.

Open Europe is a non-partisan think tank with offices in London and Brussels that produces an annual report measuring the cost burden of 40,000 EU-derived legal acts, 15,000 Court verdicts and 62,000 international standards on the United Kingdom.

Their 2015 report for the “Top 100” regulations estimated the financial burden on the UK economy at $46.6 billion. To put that drain on the economy in perspective, the top 100 EU regulations cost more than the $37.8 billion in local property taxes, called “Council Tax,” paid by British citizens to the UK Treasury last year.

The top five costliest EU-derived regulations in force in the UK were:

EU bureaucrats cleverly claim that the annual economic benefits to British citizens as members of the EU are $82 billion. But $65.2 billion of the so-called benefits stem from three unmeasurable and vastly over-stated items.

As an example, the EU bureaucracy claims that the UK receives $29 billion in “value” for participating in a global pact to reduce carbon emissions. But that falsely assumes that the Paris United Nations Framework on Climate Control treaty was fully implemented by all 196 participating countries with immediate mandated curbs on emissions, increases in renewable energy, and/or reductions in deforestation that will achieve a global warming temperature reduction of 2.7 to 3.5 degrees centigrade. The final Paris agreement is only “voluntary” and exempts China and India, the worst polluters, for decades.

The UK Parliament’s non-partisan “Impact Assessments” (IA) analysis of the EU’s regulations revealed that Prime Minister David Cameron’s Administration signed off on at least 26 of the top 100 EU-derived regulations, despite the IA explicitly stating that the financial costs outweighed the estimated benefits.

Although Open Europe’s analysis found the cost of membership in the EU far outdistanced the tangible benefits, the organization does believe there is substantial value in free trade between Britain and the other 27 EU members.

Open Europe suggests that with the approval of the Brexit, the UK should work to negotiate a type of trading and cooperation relationship called the “Norway Option.”

After the Nordic country voted down a 1972 and a 1994 referendum to join the EU, Norway negotiated a semi-detached relationship with the EU through its membership of the European Economic Area.

The EEA agreement allows free movement of persons, goods, services and capital within the internal market of the European Union. The only supposed “cost” if the UK negotiates a similar relationship is that British will not be able to vote on the onerous Rules written by EU bureaucrats and hated by a vast majority of the UK public.