Cuban Slave Doctors In Brazil: Refusing To Go Back 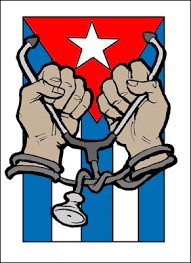 Slave Doctor: I’d Rather ‘Pick Up Garbage’ in Brazil than Go Back to Cuba. Unsalaried Cuban doctors in Brazil, now forced to return home after the Castro regime canceled an exchange program following demands by President-elect Jair Bolsonaro to pay the medical professionals a full salary, told Brazilian news outlets this week they have no interest in returning home.

The Castro regime pockets at least 75 percent of their salaries, refuses to allow them to bring families or travel back to Cuba to visit relatives, and is estimated to have made $11 million in profits on the program last year. By canceling the program this month, the communist regime may lose up to $332 million in revenue.

Cuba canceled the program after conservative President-elect Bolsonaro announced that, upon the beginning of his tenure in January, the Cuban government would have to pay 100 percent of doctors’ salaries to the doctors and allow them to bring their families to Brazil with them.


Bolsonaro also announced the Cubans would have to pass proficiency tests to ensure their skills were on par with a graduate of a Brazilian medical program. Bolsonaro’s response was to immediately offer the Cuban doctors political asylum if they wished not to return home.

“If I am president and one of these doctors requests asylum, they will have it,” he said, insisting that his government would not “threaten” Cuban doctors to keep them working for a meager working stipend like Rousseff’s government did.

Reports in Brazilian media indicate that many of the doctors implicated will take advantage of the offer. One doctor, identified as 30-year-old Adrian Brea Sánchez, told the Brazilian newspaper O Globo that he has no intention of returning home, even though, at the time of his conversation with the newspaper, the government had booked him a flight home in less than 24 hours.

“I will be considered a deserter. I will be banned from returning to Cuba for eight years, but what are they going to do, kill me?” he asked, explaining he was not afraid of staying in a “free country” like Brazil. “Who can guarantee that if I return they won’t take some disciplinary action or invalidate my diploma? Every day something new happens.”

Sánchez told the newspaper that he plans to stay in Brazil even if he has to “pick up garbage or sweep the streets” in Brazil, though at the moment he is the only doctor operating in Pirapetinga, Minas Gerais, over a thousand miles away from Brasilia.

Other doctors have also spoken up to assert they have no interest in going home. Adrián Estrada Barber, who left the “Mais Médicos” program in 2016 after marrying a Brazilian citizen, told the newspaper Folha de Sao Paulo that he chose to go through the bureaucratic process of becoming a Brazil-certified physician independent on his home country because the Cuban “medical diplomacy” programs are “exploitative” and restricting.

“I think all Cubans feel exploited,” he said. “People leave Cuba with the goal of saving up … for us it was very good money, much more than we make in Cuba. … but when we got here and saw how the world works, I decided not to return.”

The Cuban doctor also expressed outrage on the part of Brazilian doctors, many of whom lost their jobs because government hospitals replaced them with Cubans who did not require full salaries. “Many fired their Brazilian doctors to hire a Cuban, that’s no good … they said they only had jobs for Cubans,” he noted.

Estrada Barber was banned from entering Cuba for eight years when he “deserted” the program in 2016. Another group of Cuban doctors in Brazil published an open letter Wednesday to the Brazilian people explaining their situation and refusing to go home.

“We are the currency that keeps afloat an economy that has been destroyed for over 59 years,” the letter read. “The Cuban government unilaterally decided to abandon the Mais Médicos program not out of any disrespect or offense to its doctors but because President-elect Jair Bolsonaro intends to modify the terms of the program to benefit Cuban doctors and their families, and not the government of Cuba.”

The letter accused the Cuban government of harassing the relatives of doctors at home to force them to pressure the doctors to come home and not accept Bolsonaro’s offer of political asylum. “Those of us who learned to love the nobility, enterprising spirit, and love for freedom of the Brazilian people will continue to be at your side and face together the days ahead,” the letter concluded.

In response to the backlash from its doctors, the regime has accelerated the schedule for departure for the thousands of doctors it has ordered to come home. The doctors ordered to return received a notice this week stating that “all flights will be scheduled earlier” for their return to Cuba and all are expected home “as soon as possible.”

(Since the initiation of Brazil’s “Mais Médicos” program to increase the country’s number of doctors per resident rate, a tidal wave of controversy has exploded on the internet. The program touched off protests by the Brazilian medical establishment all over the country who took to the streets in several cities to express their outrage at the government’s latest experiment.

While some sites have pointed out the politics involved in this program, other controversies have surrounded comments being made about the Cuban doctors themselves. The Cubans have been called “slaves” that need to “go back to Cuba” and one journalist took to her Facebook account questioning their skills and saying that they looked like maids.

Really? Why? What is it about the appearance of these highly trained doctors that would make someone say they look like maids?

Here are a few clues:

1) In Brazil, the slavery of Africans lasted for about 350 years.
2) A common saying in Brazil is “white woman for marriage, mulata for sex and black woman for work”, which leads to,
3) Brazil has the largest number of maids in the world, which leads to,
4) black women are the majority of maids in Brazil, and
5) Until a very recent law, Brazilian maids worked in conditions that many say were analogous with slavery.) 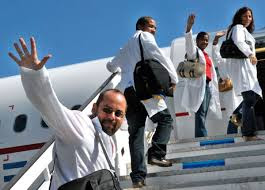