Trudeau To Let 350,000 Somali-Muslims Into Canada 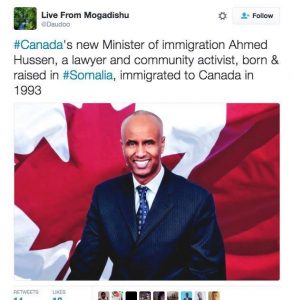 GUESS WHAT HAPPENS when a leading Western country, our Canada, puts a Somali Muslim in charge of immigration?

With the blessing and backing of Canadian Prime Minister Justin Trudeau, Somali Muslim Immigration Minister, Ahmed Hussen, plans to  increase annual immigration admissions to Canada to 350,000 by 2021…with as many as possible of those immigrants being uneducated, unskilled Somali Muslims who will live off the generosity of Canadian taxpayers for the rest of their lives.

Who cares that just 6 per cent of Canadians want immigration increased,according to an Angus Reid poll from August? Who cares that 90% of Trudeau’s Syrian Muslim refugees don’t have jobs, don’t want to learn the language, and likely will remain on welfare all of their lives?


And let’s not forget that the average Syrian is more educated than the average Somali. Ahmad Hussen says he fights every single day to increase the number of refugees Canada admits…especially Somali Muslim refugees. Gee, maybe he’ll run for Prime Minster next?

Trudeau raising immigration to historic highs. Why the emphasis on Somalis? Here’s today's big CBC headline: Canada to increase annual immigration admissions to 350,000 by 2021! That shocking rise is against the will of most Canadians:

According to an Angus Reid poll from August, just 6 per cent of Canadians want immigration increased. People feel burned. Not just from the terrorism and the crime — like Ibrahim Ali, one of Trudeau’s Syrians, accused of raping and murdering a teenaged girl in Burnaby; or the countless sexual assault charges and other violence from people Trudeau has favoured.

There are economic burdens too. Ninety per cent of Trudeau’s Syrians still don’t have a job; most don’t speak English or French. But look at that CBC subheadline: Most newcomers will address skills shortages and gaps in the labour market!

Except of those new 350,000 people a year, almost a third of them don’t even have the kind of skills you need to work at a fast food restaurant — like English and French, or high school math. It's right there in the CBC report:

Canada does plan to gradually increase the number of refugees it will accept under its humanitarian, family reunification and sponsorship programs from 43,000 to reach 51,700 by 2021. Nevertheless, the lion's share of the new admissions under Canada's immigration levels plan — 72 per cent — will be allocated to economic programs in 2021.

Hussen says (...) he fights every single day to increase the number of refugees Canada admits. Why? The Syrian civil war is over. Was this about helping people — or about something else?

Here’s a weird story in the Globe: The United Nations refugee agency is asking Canada to resettle more refugees from the Horn of Africa, emphasizing the needs of particularly vulnerable Somalis displaced by a decades-long conflict in the war-torn country.

Now, I get it. Ahmed Hussen is Somali. But what about Canada’s interests? There are 15 million Somalis. We can’t take them all. Somali immigrants to Canada have a very poor track record of integration, and a troubling tendency towards crime and terrorism. It’s probably why the United States put Somalia on the list of the seven countries from which it will ban migration.

(Just bring in all 15 million Somalis into Canada and speed up their citizenship and Ahmed Hussen will be the prime minister of Canada in very near future.)

How about we focus on the tens of thousands of foreigners who simply walked across the border from New York illegally — and now form a ten-year backlog of immigration and refugee processing?

I like immigration — if it’s lawful, orderly, and the best for Canada — and frankly, the best for the migrants. Learn English or French. Come with a skill. Love Canada — and prove it. Learn our customs and values. Who could be against that?

Well, actually, Trudeau is. Every single day we allow the lawlessness at our borders to continue — and then reward it by raising our quotas — is further proof that Trudeau and Hussen are not doing what’s best for Canada.