Most Foreign-Born Immigrants Voted For US Democrats

(Staff articles from The BREITBART NEWS in November 2018.)

Report: Booming Foreign-Born Population Handing Over Electoral Dominance to Democrats. House Democrats are dominating in districts across the United States that are heavily populated with foreign-born residents, a new report reveals.


Due to the process known as “chain migration,” whereby newly naturalized citizens can bring an unlimited number of foreign relatives to the U.S. with them, more than nine million foreign nationals have been imported to the country since 2005.

1. Immigrants, particularly Hispanics and Asians, have policy preferences when it comes to the size and scope of government that are more closely aligned with progressives than with conservatives. As a result, survey data show a two-to-one party identification with Democrats over Republicans.

2. By increasing income inequality and adding to the low-income population (e.g. immigrants and their minor children account for one-fourth of those in poverty and one-third of the uninsured) immigration likely makes all voters more supportive of redistributive policies championed by Democrats to support disadvantaged populations.

3. There is evidence that immigration may cause more Republican-oriented voters to move away from areas of high immigrant settlement leaving behind a more lopsided Democrat majority.

Democrats like former San Antonio, Texas mayor Julian Castro admit that mass immigration to the U.S. will result in Democrat dominance for generations in swing states. “The Hispanic vote in Texas will continue to increase. By 2024 Democrats can win Texas, Arizona and Florida. A big blue wall of 78 electoral votes.”

Every year the U.S. admits more than 1.5 million foreign nationals, with the vast majority deriving from family-based chain migration, whereby newly naturalized citizens can bring an unlimited number of foreign relatives to the U.S. In 2016, the legal and illegal immigrant population reached a record high of 44 million. By 2023, the Center for Immigration Studies estimates that the legal and illegal immigrant population of the U.S. will make up nearly 15 percent of the entire U.S. population.

Mass legal immigration to the U.S., like Koch brothers-supported free trade agreements, has come at the expense of America’s working and middle class, which has suffered from poor job growth, stagnant wages, and increased public costs to offset the importation of millions of low-skilled foreign nationals. 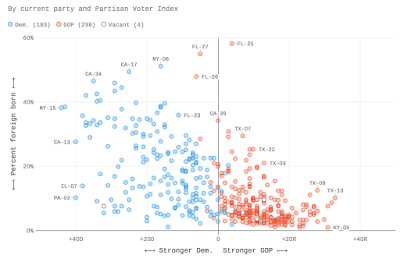 Orange County, California — once considered a conservative holdout in the blue state — has been electorally swept by Democrats in the midterm elections, coinciding with the region’s booming foreign-born populations.

Until the midterm elections, four of Orange County’s six congressional districts were held by Republicans, including Rep. Dana Rohrabacher (R-CA) and Rep. Mimi Walters (R-CA). In the midterms, though, Democrats swept Orange County with wins in all six congressional districts, turning the region blue. At the same time of Democrat dominance in the county, the foreign-born population is booming to record levels with the majority of foreign residents arriving from Latin America and Asia.

California’s 46th District, already a Democrat-held congressional seat, has a foreign-born population that is now reaching 40 percent with four-out-of-ten residents being born outside the United States. The other Democrat-held congressional seat in Orange County, California’s 47th District, has a foreign-born population of nearly 30 percent.

In the 45th District, where Rep. Mimi Walters (R-CA) has conceded to Democrat Katie Porter, the foreign-born population makes up nearly 30 percent of the district. Similarly, in the state’s 48th District, Rep. Dana Rohrabacher (R-CA) — the former speechwriter to President Ronald Reagan — lost to Democrat Harley Rouda after serving in the seat since 2013. That district’s foreign-born population is now near 25 percent.

As Breitbart News reported, districts with some of the largest foreign-born populations — like New York’s 14th, Minnesota’s 5th, and Massachusetts’ 7th District — elected some of the most far-left, open borders candidates to Congress. Democrats have increasingly gained strongholds in congressional districts due to booming foreign-born populations. 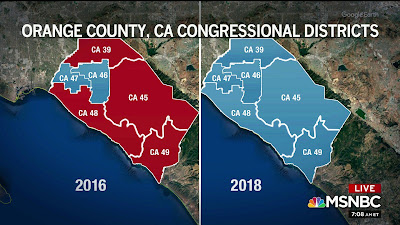