US Troops Welcoming The Caravans With Razor Wire

(Eileen Connelly’s article from The NEW YORK POST on 03 November 2018.) 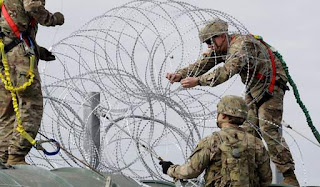 US troops lay down barbed wire along border ahead of caravan: As three separate migrant caravans slowly made their way north through Mexico on Saturday, newly arrived US troops worked to lay a barbed-wire fence along the Texas side of the Rio Grande.

The soldiers worked with US Customs and Border Patrol officers to lay about 1,000 feet of fencing along the river, the Defense Department said. The makeshift barrier was installed underneath the McAllen-Hidalgo International Bridge, which crosses into Mexico. The overpass is in the small town of Hidalgo, about 250 miles south of San Antonio.

“I saw that beautiful barbed wire going up,” Trump said at a Saturday campaign rally in Montana. “Beautiful sight.” A Border Patrol spokesman said in an email to The Post the fencing was part of “necessary preparations” for the caravans.


Roughly 900 troops have reached the US-Mexico border since the Trump administration began the deployment Oct. 26. The president vowed the forces would block the caravans, which contain thousands of migrants, from entering US turf. Military units are heading to outposts along the border from Texas to California.

After saying about 5,000 active-duty troops would be deployed as part of Operation Faithful Patriot, Trump on Wednesday boosted the number from 10,000 to 15,000. A separate contingent of about 2,100 National Guard troops had already been deployed to work with Border Patrol in anticipation of the caravans, which have about 7,000 people total, according to the Defense Department.

The first and largest group of migrants continued on foot Saturday after their hopes for bus rides to Mexico City were dashed. They were trudging through Sayula in the Gulf Coast state of Veracruz, about 750 miles from the US border. That contingent’s numbers have dropped to 4,000 from about 7,000 over the course of the journey, according to news reports, as nearly 3,000 applied for refuge in Mexico and hundreds of others returned home.

The governor of Vercaruz said in a Friday night video that authorities would provide buses to the country’s capital, three weeks after the group started their journey from Honduras. But Miguel Ángel Yunes almost immediately took back the offer in a second video. The pol blamed maintenance work on Mexico City’s water system, which he said left 7 million people without water over the weekend.

Mexican officials have stopped trucks and vans that offered rides to the group at various stages of their trek. Another caravan, of about 1,000 to 1,500 people, entered Mexico last week and was about 1,000 miles from the US border as of Saturday afternoon. That group includes Hondurans, Salvadorans and some Guatemalans.

On Friday, a similar-sized caravan waded across the Suchiate River from Guatemala into Mexico after Mexican authorities told the travelers they would have to show passports and visas to cross the bridge there.

Scenes of the first group of migrants fighting with police to get across the same bridge several weeks ago raised alarm in the US. Mexican officials eventually let groups cross it, but not before many migrants swam, waded or hired small boats to take them across the Suchiate. Walking about 30 to 40 miles daily, the first group started Saturday about 760 miles away from the Rio Grande. 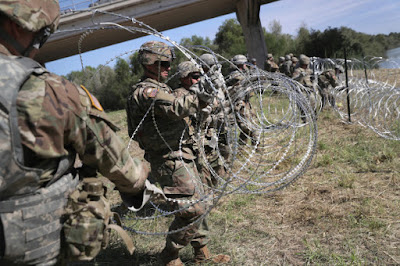 BROWNSVILLE, Texas (AP) — As the first active-duty military troops sent to the U.S. border with Mexico installed coils of razor wire on a bridge and a riverbank Friday, a sense of unease spread across Texas' Rio Grande Valley.

President Donald Trump's portrayal of a border under siege by drug smugglers and other criminals is at odds with what residents in towns along the 1,954-mile (3,126-kilometer) divide with Mexico see in their daily routines, with U.S. border towns consistently ranking among the safest in the country.

Some Valley residents question the need for a large military presence and fear it will tarnish the area's image. And some are afraid of violence if and when the caravan of Central American migrants that the troops have been sent to confront reaches the U.S. border.

While the southern tip of Texas is the busiest corridor for illegal crossings, border agents make many arrests far from public view, on uninhabited banks of the Rio Grande and on nearby dirt paths and roads lined by thick brush.

"I feel safer here than when I go up to bigger cities," lifelong Rio Grande Valley resident Emmanuel Torres said Friday while working at a coffee shop in Brownsville, the region's largest city, with about 200,000 people.

Torres, 19, said the area feels "a lot like family," and he worries the military presence will fuel outsiders' perceptions of a dysfunctional border. "People that don't live here are just going to create a bigger negative image," Torres said.

When Trump pledged this week to send up to 15,000 troops to the border in response to the slow-moving caravan of migrants, he unnerved the economically struggling region of 1 million people that stretches over flat, sun-drenched citrus groves and farms of cotton, sugar cane and vegetables. 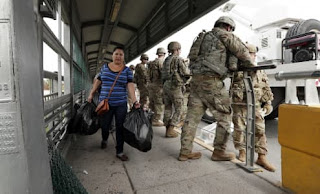 The Pentagon said more than 3,500 troops have been deployed to staging bases along the border, including about 1,000 Marines in California. Still, there were only about 100 troops at the border on Friday, working at and near a bridge leading to McAllen, Texas, the Rio Grande Valley's second-biggest city, with about 140,000 people.

More than a dozen military members in fatigues were at the northern bank of the river, below the bridge, laying concertina wire. Other soldiers erected wire barriers on the bridge's pedestrian paths.

The largest caravan traveling through Mexico is still weeks away from the U.S. border, and migrants have given no indication where they might cross. The Rio Grande Valley is the shortest route from Central America but also one of the most dangerous.

The troops are being sent in what has been described as a support role, helping border agents. But Trump said he told the military that if troops face rock-throwing migrants, they should react as though the rocks were rifles.

"It's all preparation in anticipation of the caravan," said Manuel Padilla Jr., the Border Patrol's Rio Grande Valley sector chief. "We're hoping that these people do not show up at the border. They're not going to be allowed in."

Conchita Padilla, a volunteer at the Brownsville Museum of Fine Art, said she believes the U.S. has the right to defend its borders. But she also said she is frightened by the troops because she doesn't know what they will do or how they will react to the caravan. "My worry is that if they fight each other, there might be innocent people in the way that are suffering consequences," said Padilla, 66. "We are just praying that they go in peace."

According to an analysis by The Associated Press of FBI statistics, nine U.S. cities along the Mexican border had a violent crime rate of nearly 346 offenses per 100,000 residents in 2017. That's lower than the national rate of almost 383. In Brownsville, it was 257, in McAllen, 144.

Those same nine border towns and cities also had a property crime rate of 2,058 offenses per 100,000 inhabitants. Nationwide, the estimated rate was just over 2,362 per 100,000. "It's almost shocking, but it's true," Jack Levin, director of Northeastern University's Brudnick Center on Violence. "The numbers don't lie." 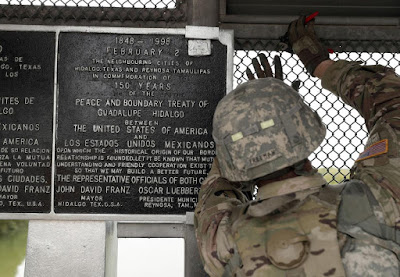