(Azeem Ibrahim’s articles from The CENTER FOR GLOBAL POLICY.)

(CNN) The Rohingya crisis in Myanmar is now widely described as ethnic cleansing. But the situation has been evolving. And now, it seems, we can no longer avoid the conclusion we have all been dreading. This is a genocide. And we, in the international community, must recognize it as such.

Article II of United Nation’s 1948 Genocide Convention describes genocide as “any of the following acts committed with intent to destroy, in whole or in part, a national, ethnical, racial or religious group, as such: Killing members of the group; Causing serious bodily or mental harm to members of the group; Deliberately inflicting on the group conditions of life calculated to bring about its physical destruction in whole or in part; Imposing measures intended to prevent births within the group; Forcibly transferring children of the group to another group.”

Though the Rohingya situation has met most of the above criteria for being described as a genocide under international law for a number of years now, the label has been resisted until now because we think of genocide as one huge act of frenzied violence, like the machete insanity in Rwanda or the gas chambers of Nazi Germany.


But the final peak of violence is in all historical cases merely the visible tip of the iceberg. And the final outburst only occurs once it has already been rendered unavoidable by the political context.

In Rwanda, Hutu tribal propaganda ran for years on the radio and in magazines referring to the Tutsis as cockroaches and a mortal threat to the Hutus that needed to be eliminated lest the Hutus themselves would die. Kill or be killed. The frenzied killing was not something that just occurred to the Hutus one day in April 1994. It was the logical conclusion of a campaign of dehumanization and paranoia which lasted for years.

The same is true of the Holocaust. The Nazi genocide began slowly and had few distinctive outbursts of violence to delineate where one degree of crime against humanity ended and where another began.

All in all, that genocide developed and unfolded over a period of more than 10 years. Most of that period was not taken up with the killing of Jews, Gypsies and all the other “sub-humans.” Rather, it was taken up with manufacturing of the category of “sub-humans” by state propaganda. Only once the problem was manufactured and sold to the wider population did the “final solution” become viable. 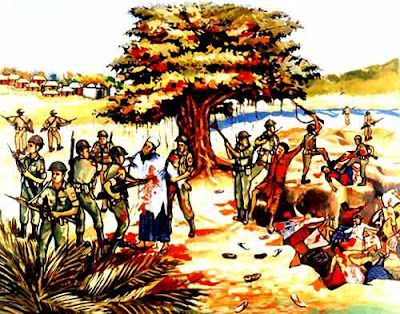 In Myanmar, extremist Buddhist monks have been preaching that the Rohingya are reincarnated from snakes and insects. Killing them would not be a crime against humanity, they say — it would be more like pest control.

And necessary “pest control” too. Just like the Tutsi conspiracy to kill all the Hutus, or the Protocols of the Elders of Zion, the Rohingya are supposed to be agents of a global Islamist conspiracy to take over the world and forcibly instate a global caliphate. The duty of any good Buddhist who wants to maintain the national and religious character of Myanmar is to prevent the Islamist takeover, and thus to help remove the threat posed by the “vermin.”

Every modern genocide has followed this pattern. Years of concerted dehumanization campaigns are the absolutely necessary pre-condition for the mass murder at the end. Usually these campaigns are led by a repressive government, but other political forces also come into play. Such was the case in Bosnia, Darfur and Rwanda. And so it is with Myanmar.

The campaign of dehumanization against the Rohingya has been going on for decades, and events certainly took an unmistakeable turn towards genocide since at least the outbursts of communal violence in 2012. Those clashes, and the ones in the subsequent years, drove 200,000 to 300,000 Rohingya out of Myanmar.

But somehow, at that rate of attrition, and against the backdrop of Myanmar’s supposed move towards democracy with the election of Aung San Suu Kyi to power in late 2015, world leaders have allowed themselves to hope that the situation could still be turned around. 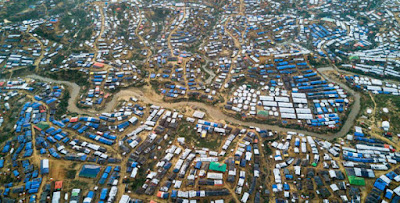 Who are the Rohingya Muslims and why are they fleeing?

Now, the reality of an exodus of a further 600,000 people in the space of just six weeks; the incontrovertible evidence of large scale burning of villages by the Myanmar military — which the military is calling clearance operations of terrorists — and the reports of widespread extra-judicial killings against fleeing civilians by the country’s federal security forces have made it much more difficult to avoid the conclusion: this is genocide.

We no longer have just the slow-burning genocidal environment which whittles down a people until their ultimate extinction. Now we are also confronting the loud bang at the end. More than half of an entire population has been removed from their so-called ancestral lands in just eight weeks!

The tragedy is that the international community will abet the situation. The UN Security Council will decline to respond to the situation with the seriousness it deserves. If a situation is defined by the Council as a “genocide,” then the UN becomes legally bound to intervene, with peace-keeping missions and so on.

That is why Western countries will be reluctant initiate such a move, and China, who is building one branch of its New Silk Road infrastructure right through Rakhine State to access the port of Sittwe, will likely veto any such proposal.

Just like we did in Rwanda, just like we did in the Balkans, we are once again seeing a genocide happen before our very eyes. And we will do nothing about it. We will bury our heads in the sand, and when our children will ask us why we let this happen we will plead ignorance. Once the final act of killing starts, it is usually too late. For the Rohingya, the final act is in full swing. And still we are in denial about what is happening. 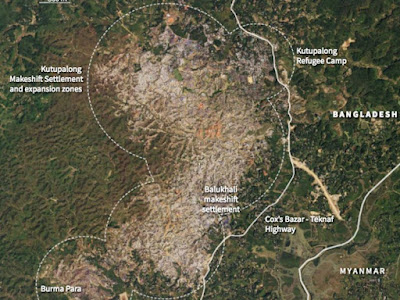 The genocide against the (remaining) Rohingya in Myanmar is “ongoing” and the government has no interest in establishing a fully functional democracy. That was the conclusion of the most recent report published by the UN Fact-Finding Mission to Myanmar yesterday.

Though the UN report estimates 250,000 to 400,000 Rohingya remain in Rakhine, precise numbers are not available as the Rohingya have officially not existed for decades. Access to the Rakhine region has also been shut off to external agencies, including the UN, for over a year so no independent assessment can be made.

However, Marzuki Darusman, Chair of the UN Fact-Finding Mission on Myanmar, made it very clear that “it is an ongoing genocide that is taking place” that has moved beyond mass killings to prevention of births, ostracization and displacement within camps.

So can we now expect a change of course from the international community? Unfortunately, despite the actions of the Myanmar being designated a genocide, Western leaders continue to expect Myanmar to hold its own internal enquiry.

Despite actions of Myanmar being designated a genocide, Western leaders continue to expect Myanmar to hold its own internal inquiry. 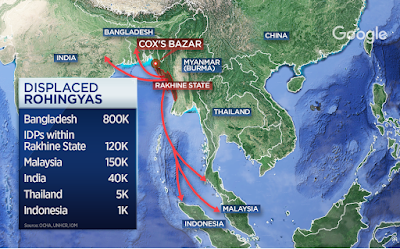 And, of course, there is nothing to stop the military simply re-assuming direct control over all aspects of the state, should they feel their position threatened.

Nevertheless, Western leaders continue to show their reluctant to exert too much pressure on Ms Suu Kyi for fear of undermining the little progress Myanmar has in fact made towards democracy and opening up to the world.

It is feared that if international pressure makes Ms Suu Kyi’s position untenable, this will make it more likely that the military will re-assert direct control over the country and move the country firmly within the sphere of influence of China.

For their part, China is likely to veto any referral to the ICC or Security Council resolution against Myanmar. China has grand designs for Myanmar. It is currently building a high-speed rail link across the entire country, as well as a deep-water port near Sittwe, to facilitate China’s Silk Road initiative. Sittwe is the capital of the Rohingya home state of Rakhine, and continues to be home to a significant, but increasingly isolated Rohingya ghetto.

As within their own territory, China has little patience for any kind of ‘unrest’, and is fully supportive of Myanmar’s crackdown, in the hope that a categorical if brutal removal of the Rohingya from the region would enhance the security of its own economic and infrastructure concerns in the area. 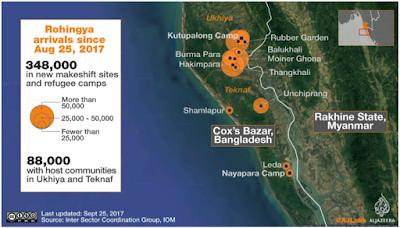 China’s backing has also inhibited the response of other international players. The UK government, for example, has taken up the baton of championing the humanitarian needs of the Rohingya from the US after the end of the Obama Administration, but has avoided bringing criminal charges against Myanmar at the International Criminal Court, citing primarily the expectation of a Chinese veto.

As things are stacked now, Aung San Suu Kyi will continue to happily soak international criticism, her government and China will continue to support the military’s actions and position, and the West and the UN will continue to complain but fail to take any meaningful and effective action beyond providing (barely adequate) humanitarian relief to the Rohingya who have made it to Bangladesh their real ancestral homeland.

Yet it is not clear whether this situation is sustainable. Not least because neither Bangladesh nor the international humanitarian leaders seem willing to accept the reality that the Rohingya are quite likely there to stay in Cox’s Bazaar.

And the international community, especially the West, would accept their responsibility for their non-existent response so far, and agree to offer Bangladesh all the financial and logistical support it needs to achieve this, agree to help the Rohingya rebuild the refugee shanty towns around Cox’s Bazaar into liveable communities, as well as offer incentives and economic support to native Bangladeshis to develop shared economic ties with the emergent Rohingya towns.

This is something that Western leadership could achieve, and can afford to do. What is lacking on the part of our leaders is vision and interest. In the age of Trump, we seem to have lost the power of our conviction, and perhaps even the moral backbone, to take charge of the issue and help Bangladesh and the Rohingya build a sustainable and mutually beneficial future together.

(Dr Azeem Ibrahim, one of Global Islamic Activists, is Senior Fellow at the Centre for Global Policy and Research Professor at the Strategic Studies Institute, US Army War College. He completed his PhD from the University of Cambridge and served as an International Security Fellow at the Kennedy School of Government at Harvard and a World Fellow at Yale. Over the years he has met and advised numerous world leaders on policy development and was ranked as a Top 100 Global Thinker by the European Social Think Tank in 2010 and a Young Global Leader by the World Economic Forum.) 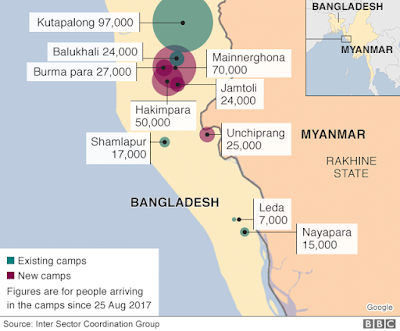