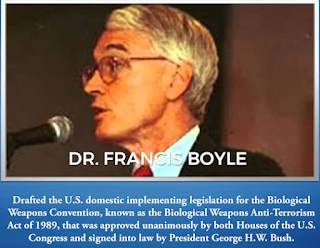 CORONAVIRUS is a bioweapon which was accidentally leaked from the Wuhan Institute of Virology, a level four biosafety laboratory seven miles from the epicentre of the outbreak, according to sensational claims from the man who drafted the first multilateral disarmament treaty banning biological warfare.

The deadly virus has now infected more than 120,000 people worldwide, claiming the lives of more than 4,300 in the process, as numbers in Europe spike, while Asia appears to be curbing the effects. This morning, Iran’s former President, Mahmoud Ahmadinejad, declared COVID-19 is a bioweapon from a military laboratory, stating: “It is clear to the world that the mutated coronavirus was produced in a lab.”

His point echoes a claim made by US Senator Tom Cotton last month, but now, Francis Boyle has exposed the “smoking gun” that he says proves this theory. The Professor of international law at the University of Illinois served on the board of directors of Amnesty International, the Advisory Board for the Council for Responsible Genetics and drafted the US legislation for the Biological Weapons Convention, known as the Biological Weapons Anti-Terrorism Act of 1989.


Appearing as a guest on the Alex Jones Show last month, he said: “I have come up with what I conclude to be the smoking gun that the Wuhan coronavirus came out of that level four facility. You’ll note now that Senator Cotton saying the same thing he was behind me at Harvard law school, and despite that, the New York Times slammed him.

“So yes, I have this scientific study now, I read these over the weekend, which is why I've changed my mind. I want to go through this scientific study so that you and the viewing audience understand their implications,  I believe they are the smoking gun of what happened here. It was published on antiviral research February 10, 2020, I read this over the weekend, now I’m not going to go through this whole study, but they did a genetic analysis of the Wuhan coronavirus.”

Professor Boyle is referring to a study titled “Coronavirus 2019-nCoV contains a furin-like cleavage site absent in CoV of the same clade,” revealed by Express.co.uk yesterday. Published on ScienceDirect this month, the paper suggested COVID-19 has been tampered with.

Professor Boyle added: “Let me just conclude, the critical part here where it says: ‘And may provide a gain of function to the 2019 nCoV for efficient spreading in the human population compared to other beta coronaviruses.’

“And the smoking gun here is on page 11, near the bottom, the last full paragraph from the bottom where it says: ‘May provide a gain of function to coronavirus for efficient spreading in the human population.

“Gain of function technology is DNA genetic engineering of a dangerous biological warfare substance, but turbocharging and gain of function work can only be done safely in a BSL-4 or a BSL-3 facility.

“So, I think clearly that the Wuhan coronavirus came out of that BSL-4 facility, this is clearly a weaponised biological warfare agent and there is no legitimate scientific or medical use for gain of function technology.”

But, Professor Boyle may be jumping the gun slightly, as the paper goes on to state further testing is needed before the scientists have concrete proof. China first alerted the world to COVID-19 on December 31, 2019, but many argued the government was lying about the true seriousness of the outbreak amid inconsistencies on certain details.

This chapter makes the case against performing exceptionally dangerous gain-of-function experiments that are designed to create potentially pandemic and novel strains of influenza, for example, by enhancing the airborne transmissibility in mammals of highly virulent avian influenza strains.

This is a question of intense debate over the last 5 years, though the history of such experiments goes back at least to the synthesis of viable influenza A H1N1 (1918) based on material preserved from the 1918 pandemic.

This chapter makes the case that experiments to create potential pandemic pathogens (PPPs) are nearly unique in that they present biosafety risks that extend well beyond the experimenter or laboratory performing them; an accidental release could, as the name suggests, lead to global spread of a virulent virus, a biosafety incident on a scale never before seen.

In such cases, biosafety considerations should be uppermost in the consideration of alternative approaches to experimental objectives and design, rather than being settled after the fact, as is appropriately done for most research involving pathogens. The extensive recent discussion of the magnitude of risks from such experiments is briefly reviewed.

The chapter argues that, while there are indisputably certain questions that can be answered only by gain-of-function experiments in highly pathogenic strains, these questions are narrow and unlikely to meaningfully advance public health goals such as vaccine production and pandemic prediction.

Alternative approaches to experimental influenza virology and characterization of existing strains are in general completely safe, higher throughput, more generalizable, and less costly than creation of PPP in the laboratory and can thereby better inform public health. Indeed, virtually every finding of recent PPP experiments that has been cited for its public health value was predated by similar findings using safe methodologies.

The chapter concludes that the unique scientific and public health value of PPP experiments is inadequate to justify the unique risks they entail and that researchers would be well-advised to turn their talents to other methodologies that will be safe and more rewarding scientifically. 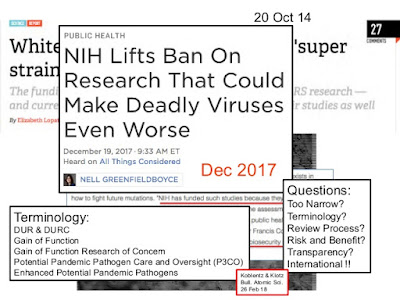