It is time to end this misguided social experiment, get back to work! We are not denying that there is great merit to social distancing. However, the mandatory aspects of this grand social experiment must be immediately abolished across the world.

That is, we are required to explain to each subject, in great detail, precisely what we are trying to accomplish in our project, as well as its duration, cost and risks. We also have to abide by an ethical code, which says that there should be no psychological or physical harm to the subject.


Unfortunately, the current experiment that is being conducted on us by supposedly democratic governments throughout the world follows none of these principles. Moreover, it has been designed by unelected public health officials; the same officials who failed in their duty to protect us from the virus.

Therefore, we are allowing the unit responsible for government failure to give advice on how to “solve” a problem that is in large part their fault. These officials also seem to have a single goal in mind: reducing the number of individuals who contract the virus. Such a single-minded approach is not consistent with an appropriate cost/benefit analysis of the consequences of their proposed actions.

The other pernicious force at play in this multifaceted tragedy is a crazed media, which have sensationalized the spread of the virus and vastly overestimated the damage the virus could create. For example, media outlets constantly refer to Italy, which is clearly an outlier along many dimensions, pressuring policymakers to lockdown the entire economy. This dangerous interplay between the media and policymakers has been termed an “availability cascade” by Nobel laureate Daniel Kahneman. 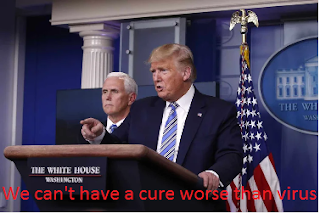 He explains: “An availability cascade is a self-sustaining chain of events which may start from media reports of a relatively minor event and lead up to public panic and large-scale government action. On some occasions, a media story about a risk catches the attention of a segment of the public, which becomes aroused and worried. This emotional reaction becomes a story in itself, prompting additional coverage in the media, which in turn produces greater concern and involvement.

“The cycle is sometimes sped along deliberately by ‘availability entrepreneurs,’ individuals or organizations who work to ensure a continuous flow of worrying news. The danger is increasingly exaggerated as the media compete for attention-grabbing headlines.

“Scientists and others who try to dampen the increasing fear and revulsion attract little attention, most of it hostile: Anyone who claims that the danger is overstated is suspected of association with a ‘heinous cover-up.’

“The issue becomes politically important because it is on everyone’s mind, and the response of the political system is guided by the intensity of public sentiment. The availability cascade has now reset priorities. Other risks, and other ways that public resources could be applied for the public good, all have faded into the background.”

Kahneman’s description appears to be a perfect fit in describing the surrealistic events that we are experiencing today. While reducing the number of individuals who contract a virus (which happens to be non-deadly for at least 99% of those who contract it) is a laudable goal, the consequences of government’s proposed “cure” for society may be much worse than the consequences of the disease they are trying to prevent.

THE “STRATEGY” of social distancing has been implemented through widespread shutdowns. But what is the actual cost of saving a life under the current strategy? Does this justify shutting down the economy and creating chaos and misery in many human dimensions?

Public health officials, working with an unscrupulous media, have feverishly constructed a false and misleading narrative that conveniently fits their apocalyptic view of a “crisis.” This has compelled politicians, even those who would normally reject draconian measures to stifle economic activity, to engage in the most rapid form of self-inflicted wealth destruction and restriction of economic liberty we have ever witnessed in a free society. 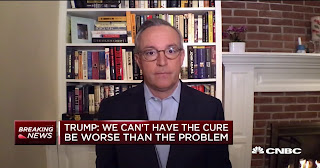 These unprecedented and unlawful actions to effectively quarantine healthy people constitute a fundamental assault on our personal and economic freedom. We are destroying our economy and at the same time causing intense psychological distress.

Among many other unintended consequences, current lockdown policies can lead to an increase in domestic violence and suicide. Research has shown that women at risk of domestic violence often increase their labor force participation in order to reduce their exposure to a violent spouse. This is no longer possible.

There is also a firmly established correlation between economic downturns and suicide. The lockdown policies that our politicians are adopting is a very dangerous precedent for “saving lives,” especially because voluntary action and individual and organizational adaptations of behavior could accomplish the same objectives.

As a result of the mandatory restrictions imposed by government, and voluntary actions undertaken by other institutions (e.g., virtue-signalling private and non-profit organizations), we are likely to witness a self-inflicted economic and psychological depression, hoisted upon us by an unholy triumvirate of public health officials, the media and politicians.

We are not denying that there is great merit to social distancing. We are not opposed to the adoption of this practice on a voluntary basis, and other less costly methods of disease prevention, including massive testing and increased government expenditures for the emergency production of ventilators and hospital space.

However, the mandatory aspects of this grand social experiment must be immediately abolished across the world, and we should adopt a more targeted approach to allocating resources to those areas of each country that are most affected by this disease.

In the meantime, we call on all business owners and citizens who care about economic liberty and personal freedom to rise up and demand that politicians lift all bans on commerce. Let us get back to work!