“The virus continues its march across the state of New York,” said Cuomo in his now-daily Albany press briefing, noting that only two counties in all the Empire State have so far been spared confirmed cases. “New York is the epicenter.”

The state now has 59,513 confirmed diagnoses, with 965 dead, Cuomo said. That grim tally includes 32,308 cases and 678 deaths in New York City, where a resident is now dying every 8.9 minutes, according to city statistics.

“I don’t see how you look at those numbers and conclude anything less than thousands of people will pass away,” said Cuomo, of the statewide figures. With the apex of the contagion still expected to be weeks away, Cuomo extended his PAUSE order mandating the closure on non-essential businesses statewide until at least April 15. “We’re doing it in two-week intervals, because every day is a new day, and we’ll see what happens day-to-day,” said Cuomo. “But I think it’s not even questionable today.”


Why New York Is The Epicenter Of American Outbreak?

(CNN)There were over 74,000 cases of coronavirus in the United States as of Thursday midday. About half were in New York -- almost 10 times more than any other state. Why has the outbreak hit New York so much harder than other places?

Health experts said the answers are largely specific to the New York metropolitan area -- its density and population, primarily -- but they are also a warning to other states that think they may be spared. New York is the epicenter for now, but Covid-19 will not stop there.

"The notion that the book is written on how this is going to play out across the country is dangerous," said Dr. Kent Sepkowitz, CNN medical analyst and professor of Medicine and Infectious Diseases at the Weill Cornell Medical College in New York City. "We're seeing New Orleans going up now, Detroit. (In) the next few weeks, many cities will have a New York story."

High density and size: The first and most obvious explanation for the severity of the area's outbreak is that New York is the largest and most densely populated city in the US, and coronavirus tends to spread in dense places. "That spatial closeness makes us vulnerable," New York Gov. Andrew Cuomo said Wednesday.

New York City had an average of just over 27,000 people per square mile, according to the 2010 Census. That's more than double the density of Chicago and Philadelphia and more than three times the density of Los Angeles.

At all times of day, New Yorkers pack together on the subway, bump into each other on sidewalks and brush knees at bars and restaurants -- all while potentially contagious. They live in crowded apartment buildings, squeezing up stairs or into elevators with neighbors.

The transit system connects people across all five boroughs, so most people don't own cars that might otherwise separate people. "We're used to crowds," New York City Mayor Mayor Bill de Blasio said. "We're used to lines. We're used to being close together."

With over 8 million people, New York City is also the largest city in the country. So New York's high number of coronavirus cases is also just a reflection of its size. The state will likely lead the country in coronavirus cases even if its infection rate per person is not the highest, Sepkowitz said. 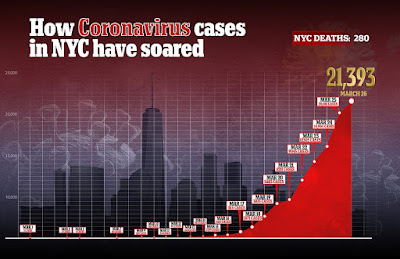 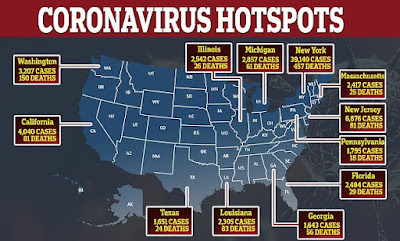 High testing rates: The US has lagged behind other countries in testing suspected cases, and people across the country have told CNN that they have been unable to get tested. New York, though, has made a dedicated push to ramp up testing at hospitals, labs and drive-through centers specifically set up in the most dense areas. With FDA approval, New York state authorized 28 public and private labs to begin testing for coronavirus on March 13, the first state to do so.

Widespread testing may make the numbers look bad, sure, but health officials say it's vital to slowing the spread of the virus. The more you test, the more you can isolate those people who have the virus and thereby stop it spreading.

Still, testing is just a part of the explanation for the high totals, according to Dr. Arthur Caplan, a CNN medical analyst and the head of the Division of Medical Ethics at NYU's School of Medicine.
"I think it is true that we have a worse outbreak here just by admissions to ICUs as they begin to build. It's not just testing," he said.

Slow early response: Cuomo has earned rave reviews for his daily press conferences during the crisis. But both he and de Blasio were slow to aggressively shut schools, events and social gatherings in the early days of the outbreak.

"Social distancing isn't going to stop transmission but it makes it slower and that makes it easier to treat people," Caplan explained. "The old 'flatten the curve.' I think they were too slow. I think the whole country was too slow."

New York state had its first case of community spread, meaning its origin was not known, on March 2 in New Rochelle, a suburb of New York City. By March 11, there were 216 confirmed cases in the state, and that number rose to 613 by March 14.

Cuomo and de Blasio limited gatherings of over 500 people on March 12 but resisted disrupting life too much. "We are going to very quickly put out guidance about having to reduce crowds and audiences while still having a certain amount of activity," de Blasio said at the time. 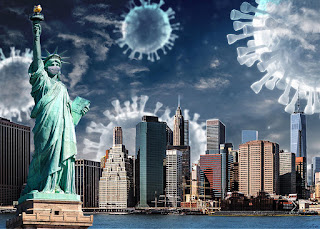 As coronavirus cases continued to rise exponentially, that activity no longer became sustainable. New York ordered all schools closed by March 18, when it already had 2,300 cases. Cuomo ordered non-essential workers to stay at home beginning March 22, when there were over 15,000 cases.

In contrast, California similarly had an early outbreak but took more aggressive measures to limit social life. On March 16, leaders across the San Francisco Bay area instituted a shelter-in-place order to keep people in their homes when there were 500 cases statewide. Gov. Gavin Newsom issued a statewide stay-at-home order on March 19, when the state had 900 positive cases.

Because the virus spreads exponentially, a delay of even a few days can lead to major differences. "It's important to isolate and distance early because it makes it harder for the virus to jump from person to person quickly," Caplan said. "When it spreads slower then you have enough beds in the hospitals and ICUs and ventilators to handle the sick."

Travel destination: The Big Apple! The City That Never Sleeps! Concrete jungle where dreams are made of! New York City is a world-renowned tourist destination and the most visited destination in the US. As such, Cuomo said that contagious people from countries that had earlier coronavirus outbreaks traveled to the city and spread the virus.

Still, those moves were too late to stop the virus from reaching New York because of its heavy travel, Caplan said. New York's heavy travel "sort of made the virus arrive here earlier," he said. "It started here faster."

First but not last: Given all those reasons, New York City was always bound to be a hub of rapidly spreading cases. But it is far from the last. "We're just early. We will see surges in other places," Caplan said. "It's like a rock thrown into a pond and it ripples out," he added. "It goes to cities, then suburbs, then rural areas due to population density." 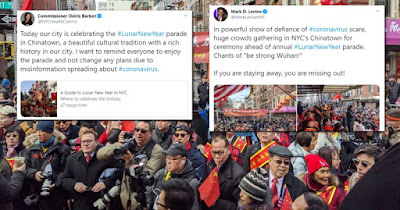 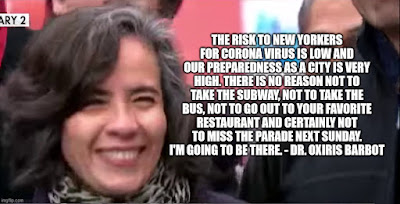 Political correctness proves deadly once again. Back in February, health officials in New York told residents to congregate in huge crowds in “defiance” of coronavirus, a move that could have exposed thousands of people to Wuhan Virus.

New York City Health Commissioner Oxiris Barbot posted a tweet on February 9 urging citizens to flock to Chinatown in large numbers to celebrate the lunar new year while suggesting that advice to avoid crowds was “misinformation.”

“Today our city is celebrating the #LunarNewYear parade in Chinatown, a beautiful cultural tradition with a rich history in our city. I want to remind everyone to enjoy the parade and not change any plans due to misinformation spreading about #coronavirus,” she wrote.

"In powerful show of defiance of #coronavirus scare, huge crowds gathering in NYC's Chinatown for ceremony ahead of annual #LunarNewYear parade. Chants of "be strong Wuhan!" If you are staying away, you are missing out!" he wrote.

Those tweets are receiving a fresh backlash of criticism given what has unfolded since. Many of the individuals who showed up for the celebrations were Chinese and could have visited China in the weeks before.

Confirmed cases of coronavirus across New York state surged 38 per cent overnight to 20,875 total cases. There have been 157 deaths. New York is the hardest hit state in the country and New York City accounts for 12,305 confirmed infections.

The advice given by the officials was in line with World Health Organization rhetoric at the time, which discouraged the “stigmatization” of Chinese people. WHO DG Tedros publicly stated so many times that the stagma is much worse than the Coronavorus itself.

Once again, it appears that pandering to political correctness almost certainly worsened the spread of coronavirus in New York and could even have led directly to people dying. Back in February, leftist officials in Italy were also urging citizens to go outside and hug Chinese people in order to fight racism. 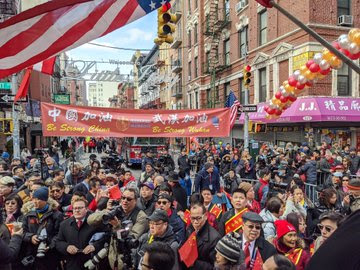 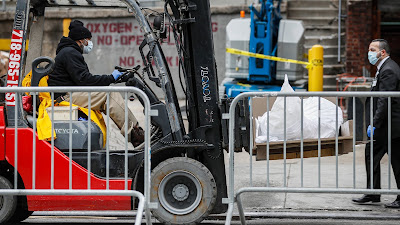