(This is my thoughts about how and why the power-hungry-lefties wearing the cloaks of environmentalist-greenies, thus named the green-outside-red-inside Watermelons, are damaging not just the livelihood of people but also the fledgling economy of extremely-poor Burma.)
Frequent power blackouts are common occurrences especially in Rangoon and the whole Burma in general. And it has been a chronic problem since late 1960s.
In the 70s and 80s when I was living right smack in the middle of Rangoon the power normally came on only at nights, sometimes at midnights, for less than a couple of hours and that was just long enough to run the water-pumps so that the households could get the meager amount of government-supplied water for their domestic use.
Even nowadays Rangoon the biggest city in Burma has had rolling blackouts because of the government-rationing of electricity supply. Almost every business relying on electricity is forced to use a small petrol-or-diesel-engine-driven generator and the loud noise and smoke pollution of these humming generators basically make lives around them hellish. At minimum five dollars a gallon of petrol and diesel that option isn’t cheap at all.
So what the hell is going on in Burma?
Very Little Generating Capacity
At present Burma generates only 1,529 megawatts (MW) of electricity, according to the Burma’s Ministry of Power (2) which controls the electricity distribution, while the current demand is 1,720 MW.
Here, I do need to remind the readers that less than a quarter of more than 60 million population of Burma is hooked up to the national power grid while the rest are still living in the dark ages.
The neighboring Thailand has a generating capacity of 28,479 MW, almost 20 times Burma’s generating capacity, and consumed 22,596 MW in 2009 alone. The obvious result is the Thailand’s much higher GDP per capita of US$ 8,700 (in 2010) compared to Burma’s very low 1,400.
More than 25% of electricity generated in Thailand is from coal-fired power plants and the 70% is from natural gas-fired plants. More than 70% of electricity generated in Burma is from hydroelectric sources and almost 30% is from natural gas-fired generators. 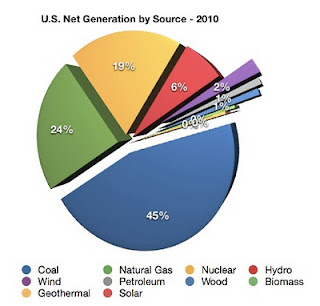 Following video is the animated plant tour of one coal-fired generator from US power company First Energy showing how electricity is generated by new clean-coal technology.

Nearly half of the total electricity this world has produced and consumed has come from the coal-fired generators. And just few years ago China claimed to be building one brand-new coal-fired generator every two weeks to feed her double-digit economic growth. 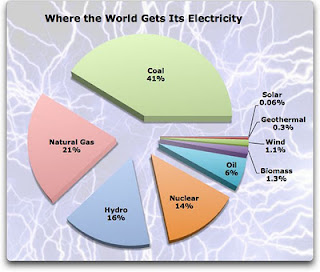 But, believe it or not, till few years ago Burma had none of the coal-fired generators commonly found in this world even though the country is generously endowed with massive coal seams and continuously exporting coal. So in recent years Burma has been trying to catch up with the rest of the world by planning to build seven coal-fired generators.
And so far they have built two coal-fired generators and the largest one already operating is the 120 megawatt Tigyit Plant in Southern Shan State.
What happened immediately after the Tigyit plant was commissioned was incredibly stupid even for the Burmese standard. The Watermelon groups have suddenly appeared out of nowhere to condemn the plant.

Taking a hardline militant stance on environmental grounds seems to be an extremely-popular activity for most foreign-donors-sponsored-activists in Burma nowadays. Anti-development and anti-progress mob, aren't they?
The so-called environmentalists have since been trying to shut the Tigyit Plant down!

The Paoh Youth Organization (POYO) and Shan Sapawa Environmental Organization (SSEO) the local Watermelon groups had hastily released a half-baked report claiming the water and air pollution from the brand-spanking-new generator is seriously threatening the crops and health of 12,000 residents around the power plant and they are to be immediately evacuated.
Do these people rather live in dark than living under the shadow of a coal-fired generator?
They ridiculously claimed the Tigyit Plant has been emitting clouds and clouds of poisonous gases and releasing more than 100 tons of toxic fly-ashes every day. With such massive rate of fly-ash-emission the whole Shan State should now be covered with ashes like a devastated island in the Philippines or Indonesia just after a massive volcanic eruption?
Media-scared Ministers and the Timid President
But, believe it or not, the exaggerated yells of the Watermelon groups like POYO and SSEO have caused a scare, a very serious one, among the suddenly media-scared Energy Ministers and even affected the timid President of Burma, the so-called soft-liner Thein Sein.
President Thein Sein has already abruptly stopped Chinese sponsored-and-built Myitsone Dam in the Kachin State by using the so-called environmental concerns among the general public stirred by the Watermelons from Daw Su’s NLD and so-called 88 Generation-students.
Now his three energy ministers, ministers for Energy, Electric Energy (1), and Electric Energy (2), have even alarmingly stopped the already-started construction of the multi-billion-dollar 4,000 Megawatt coal-fired generator at Dawei (Tavoy) Special Industrial Zone Project. 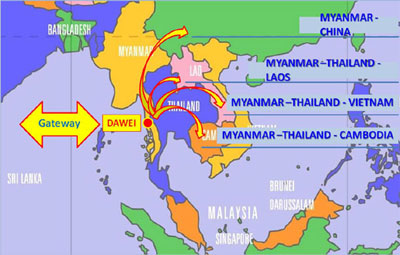 The project developer Italian-Thai signed the contract with Burmese government and the Ratchaburi Electricity Generating Authority last November to build the coal-fired plant to generate power for the 58 billion-dollar Dawei Project which includes a deep-sea-port, a large-scale oil refinery, and a petrochemical plant, all supported by the power to be generated by the now-halted coal-fired generator.
Now the biggest industrial project in recently-reinvigorated Burma is being abruptly hung dry in the air without power it surely needs to run.
So, what the bloody hell is going on in our Burma?
The honorable Khin Maung Soe, Minister for Electric Power (2), told journalists in last January that the ministers for Energy, Industry, EP-1, and EP-2 had decided not to allow the Dawei Coal-fired Generator to go ahead.
The minister said the cancellation was due to “fears of the adverse effects on the environment” and he also added that they (the ministers and the president) saw the journals publishing articles on the adverse effects of the coal-fired power plant and they read them and decided that they should not do it (allowing the coal-fired generators).
These ministers and the president are ex-army generals and just few years ago they were real busy arresting and torturing and killing the same journalists and wannabe journalists of Burma and now they are suddenly scared of them? Unbelievable!
So, what the bloody hell is going on in our Burma, again?
Clean-Coal Technology
When I was living in Rangoon I frequently saw huge piles of blackish rocks of coal waiting for export at Kyi-myint-daing open-air coal terminal. It was a horribly dirty site especially when the mountainous piles of coal ignited itself from deep inside and the smoldering dark smoke basically smothering anyone nearby without a facemask.
For me, and for most people I honestly believe, the word coal instantly means dirty. And when I first heard the term clean-coal I honestly thought that word was a total oxymoron invented by the big business to trick the public. Only many years later I’d learned enough to accept the term and the related technology.
Coal is the cheapest and most abundant fuel source on this earth and we as human beings needing constant supply of energy in the form of electricity cannot just simply stop using it, period.
Necessity is the mother of all inventions and the clean-coal technology is a must for energy-hungry humanity. Thus the big business of power generators have finally but slowly invented that technology at a massive cost to them so that their extremely profitable power-businesses survive.
The clean-coal technology has successfully reduced the toxic-gas emission and harmful waste substantially from coal-based electricity generation all over the world and that is the main reason all the countries of this world nowadays are still using their numerous coal-fired generators.
Our Burma should not be afraid of using her abundant coal to generate the electricity her people desperately need right now.
The following video is one example of how US based First Energy is successfully incorporating the clean-coal technology into its coal-fired power plants.
Are Burmese Watermelons Opportunists or Defeatists?
The Watermelon organizations in Burma must have heard and known of the Clean-coal technology, I sincerely believe. But they are still calling for a full moratorium on all existing and planned coal-fired generators in Burma as if they really want to keep the people of Burma in a complete darkness without electricity.
“If the government is really concerned about the impacts of coal, it should stop all coal plants in Burma,” said Khun Myo Hto of POYO. However small, a coal plant can be deadly for local communities, he added.
For these Watermelons like POYO and SSEO they need a good cause to rebel as the rebels without a cause is no longer a profitable option since no donors will be willing to drop them a dollar or euro. They are pure opportunists sacrificing the livelihood of the people of Burma and at the same time seriously harming the progress and economic development of Burma.
If they are not opportunists and if they truly believe in what their claims about the harmful effects of coal-fired plants, why aren’t they trying to suggest the alternative or better solutions like clean-coal plants than calling to shut down all coal-fired generators like the defeatists? 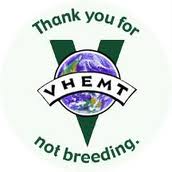 Yes, we humans are wrecking this planet and its environment since we evolved into this present form of intelligent species overcrowding the earth. We humans are responsible for all the ills happening in this world and, believe it or not, there are some people who are total defeatists forming a self-extermination society like the VHEMT (The Voluntary Human Extinction Movement) urging humans to not reproduce and to let ourselves die out of existence, just to save the planet.
In my humble opinion whether these Burmese Watermelons are the defeatists or opportunists they all should be lined up against the wall and dispatched out of this world just for the sake of the progress and development of Burma, just kidding!


Is Burma or fricking Myanmar still a Socialist Country?
One thing really baffling me is why is the government still the sole generator and distributor and seller of electricity in Burma?

IMHO, what the Burmese government needs to do right now, not tomorrow or next year, is just privatize the electricity industry and by next year or two there will be no more complete-blackout or electricity-ration in Rangoon. These stupid generals still do not learn the lessons from the mistakes of Ne Win's era. 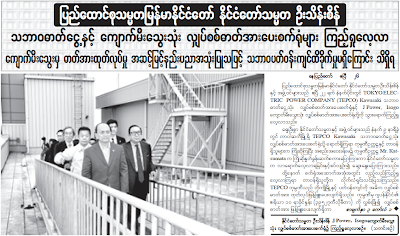 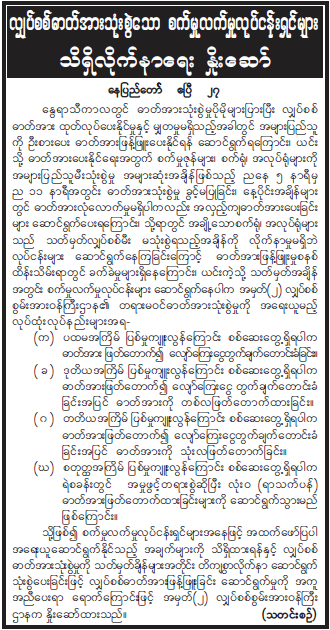 This government warning, published in the New Light of Myanmar on 28 Apr 2012, to all the industrial enterprises, workshops, and factories in the whole country to switch off electricity between 5 pm and 11 pm , the busiest time of usage by the general households, tells how severe the electricity shortages are in Burma now. The repeat violators will be cut-off from the supply, the warning threatens and also seriously reminds the businesses of  hefty penalties for the violations. 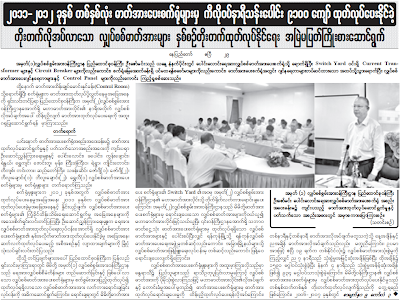 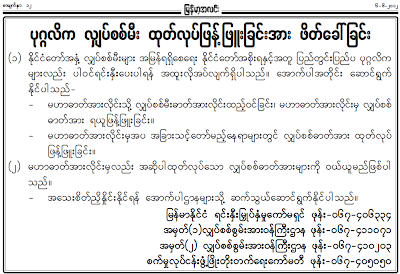