(Chapter VII of Narrative of The Burmese War by Major John Snodgrass, British Army, the Military Secretary to the Commander of the British expeditionary force and the Assistant Political Agent in Ava.)
The time had now arrived when the disasters and defeats of three months, with the hopeless condition of the Burmese army at Rangoon, could no longer be concealed: wongees and princes had successively assumed the superintendence of the war, proclaiming to the king and the nation the approaching destruction of the British force, and had each in turn atoned for their loudly-vaunted threats of driving invaders back into the ocean, by the conspicuous failure of their plans and operations, and the signal defeat of their feeble efforts to compel us to retire.
Supersession and disgrace had rapidly followed each other, through a long list of commanders, in the vain hope that one would at last be found possessed of sufficient talent to turn the tide of war on that side, where not only numbers, but, as they still boasted, valour also lay; and it was not until the catalogue of these heroes was expended, that his Burmhan majesty turned his eyes to one then distant, at the head of his veteran legions, who had long stood pre-eminently high as a warrior and statesman; and had been the means of adding to the Burmese empire some of the most valuable acquisitions of his present majesty.

General Maha Bandoola and Burmese Army at Ramoo in Bengal
Maha Bandoola, the chief above alluded to, had, some time before the British expedition reached Rangoon, proceeded to take command of the Arracan army destined for the invasion of Bengal.
On arriving in Arracan, the Bandoola lost no time in commencing offensive operations; a strong corps was expeditiously moved forward to Ramoo, by the roads which had been secretly prepared through the jungle: this greatly superior force, after some skirmishing, surrounded and made a general attack upon a small British post before it could be reinforced by the troops advancing to its support; and although an honourable resistance was made by its defendants, they were borne down by numbers, and completely cut up.
Some of the officers and Sepoys effected their escape, but great numbers fell into the hands of enemy, by whom the European officers and many of the native soldiers were most barbarously put to death.
On receiving the news of this disaster, and of the great force of the enemy, the commanding officer, advancing to the support of the Ramoo party, retired to prepare for the defence of Chittagong itself, to which it was supposed the enemy would immediately advance.
Exaggerated reports of the strength and ferocity of the Burmese troops were soon in circulation, carrying alarm even to Calcutta, the very name of Burmhan spreading dread and terror among the native population.
The peasants on the frontier fled in dismay from their villages; and every idle rumour was magnified so industriously by timid or designing people, that the native merchants of Calcutta were with difficulty persuaded to refrain from removing their families and property from under the very guns of Fort William.
Recall of Maha Bandoola and the Burmese Army from Arracan
The Burmese, however, did not advance beyond Ramoo, but were employed in erecting stockades in that neighbourhood, which Bandoola, no doubt, intended should form the basis of his forward movement on the return of cold season, but from which he was long previously recalled from all thoughts of invasion, to the defence of his own country.
The presence of such a force upon our frontier at so short a distance from the capital was naturally regarded with some anxiety in Bengal; and although the rainy season afforded a temporary security against its inroads and aggressions, its removal, nevertheless, was anxiously desired.
That important object was at length gained by the successful operations of the Rangoon army.
An order from Ava recalled Bandoola, with his legions, to the Irrawaddy, and in the latter end of August he suddenly broke up from Ramoo, and retired from the Chittagong district.
Rapid March of Maha Bandoola’s Army over Arracan Ranges 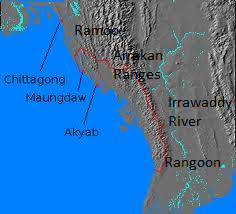 Little is known of the march of his force through the provinces, and across the mountains of Arracan, to the Irrawaddy; a distance, by the shortest route, of upwards of two hundred miles, at a season of the year when none but Burmhans could have kept the field for a week, much less have attempted to pass the insalubrious jungles and pestilential marshes of Arracan, with rivers, arms of the sea and mountain-torrents opposing their progress at every step.
By a Burmese, however, obstacles of this description are little regarded: half amphibious in his nature, he takes the water without fear or reluctance; he is besides always provided with a chopper, and expert in the construction of rafts where necessary: seldom encumbered with commissariat or equipage of any kind, and carrying a fortnight’s rice in a bag slung across his shoulders, he is at all times ready to move at the first summons of his chiefs, who, when unembarrassed by the presence of an enemy, divide into parties for the greater celerity of movement and provisioning of the men, each pursuing his own route to the place of general rendezvous appointed by the chief commander.
Such, on this occasion, seems to have been the plan followed by Bandoola; and without its even being suspected by our advanced posts, his army, in the course of one night, disappeared from Ramoo, leaving no trace of the route by which it had retired; not even a sick man was left behind: a considerable store of grain, that had no doubt been collected for the meditated advance into Bengal, was the only thing found in the evacuated stockades.
Maha Bandool at the court of Ava
The arrival of Maha Bandoola at Ava, where high honours were conferred upon him, and his appointment to the command of the army of Henzzawaddy, were speedily communicated to crest-fallen levies in our front; the very name of the new commander restoring confidence and courage, and acting as a spell in drawing forward the lately reluctant peasantry to range themselves under the banners of so popular a leader.
The arrival of part of the Arracan force at Sembeughewn (Sin-phyu-kyun) was soon afterwards made known, and different parties, which had marched along the sea-coast or crossed the mountains near to Prome, were gradually arriving at the general rendezvous at Donoobew (Danubyu).
The Bandoola himself was to leave Ava with a large fleet of boats, containing a train of artillery, and to be joined by the several detachments on his progress down the river. The whole of his new army was to assemble in the neighbourhood of Donoobew, from which place it was supposed it would not move forward to join the levies in our front before November, when the rainy season would be over.
Continuation of Hostilities at Rangoon
In the meantime the troops at Rangoon were not idle, nor did the British commander allow the enemy any time to recover from the impression that had been made, and the panic that prevailed among them.
No opportunity was lost of attacking every assailable point they occupied.
Their stockades upon the Dalla river, and those upon the Panlaug branch (Pan Hlaing River) or the principal passage into the Irrawaddy, were attacked and carried with few casualties on our part, while the enemy in both instances suffered severely, with the additional loss of many pieces of artillery.
The rains continued during the whole month of September, and sickness had arrived at an alarming height.
An epidemic fever, which prevailed all over India, made its appearance among the troops, which, although in few instances of fatal tendency, left all those whom it attacked in a deplorable state of weakness and debility, accompanied by cramps, and pains in the limbs: men discharged from the hospitals were long in regaining their strength; and too frequently indulged in pineapples, limes, and other fruits with which the woods about Rangoon abound, bringing on dysentery, which, in their exhausted state, generally terminated in death.

The incessant rains, with severe and indispensable duty, no doubt added to the sickness; and although the climate is perhaps as favourable to the European as that of any part of our eastern possession, they, in particular, suffered most severely, dying in great numbers daily.
Our situation at this time was, indeed, truly melancholy; even those who still continued to do their duty, emaciated and reduced, could with difficulty crawl about.
The hospitals crowded, and with all the care and attention of a numerous and experienced medical staff, the sick for many months continued to increase, until scarcely three thousand duty-soldiers were left to guard the lines.
Floating hospitals were established at the mouth of the river, bread was furnished in sufficient quantities, but nothing except change of season, or of climate, seemed likely to restore the sufferers to health.
Mergui and Tavoy now in our possession, and represented by the professional men who visited them as possessing every requisite advantage, were accordingly fixed on as convalescent stations.
To these places numbers were subsequently sent, and the result fully justified the most sanguine expectations that were formed. Men who had for months remained in a most debilitated state at Rangoon, rapidly recovered on arriving at Mergui, and were soon restored in full health and vigour to their duty.
******************************* 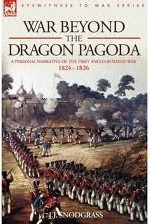 (The First Anglo-Burmese War (5 March 1824-24 February 1826) was the first of three wars fought between the British and Burmese Empires in the 19th century. The war, which began primarily over the control of north-eastern India, ended in a decisive British victory, giving the British total control of Assam, Manipur, Cachar and Jaintia as well as Arakan and Tenasserim. The Burmese were also forced to pay an indemnity of one million pounds sterling, and sign a commercial treaty. The war was the longest and most expensive war in British Indian history. Fifteen thousand European and Indian soldiers died, together with an unknown number of Burmese army and civilian casualties.
The campaign, the most poorly managed one in British military history, cost the British five million pounds sterling (roughly 18.5 billion in 2006 US dollars) to 13 million pounds sterling (roughly 48.1 billion in 2006 US dollars) that led to a severe economic crisis in British India in 1833. For the Burmese, it was the beginning of the end of their independence. The Third Burmese Empire, for a brief moment the terror of British India, was crippled and no longer a threat to the eastern frontier of British India. The Burmese would be crushed for years to come by repaying the large indemnity of one million pounds (then US$5 million), a large sum even in Europe of that time. The British would make two more wars against a much more weakened Burma, and swallow up the entire country by 1885.)
First Anglo-Burmese War (1824-1826) – Part 1
First Anglo-Burmese War (1824-1826) – Part 8
Posted by Hla Oo at 12:41 AM