To Respect but Not Protect: Joke on NLD?

(This is The Nation’s Satirical Piece “The right to respect but not protect : White House – EU – NLD” by Tulsathit Taptim on The Nation site, 25 April 2012.) Here's my take on what the people who matter may want to say to one another if there was no hindrance of diplomatic etiquette and political correctness. Imagine a Skype conference between a senior Washington official, a National League for Democracy spokesman and a top European Union representative.
White House official: What on earth is going on over there?
NLD spokesman: We are not taking the parliamentary oath. It's as simple as that.
White House official: I know. But tell me why you can't "protect" the Constitution while you can "respect" it. What's the difference? Correct me if I'm wrong, but if you respect something, don't you naturally want to protect it?

NLD spokesman: Respect can also mean to acknowledge the existence of. We essentially want to say we accept that the Constitution is there and we can't do anything about it, but we are not willing to die in defence of the charter.
White House official: It's great to be idealistic. But if to be symbolic about the charter is so important, why did you participate in the election, which was held under the auspices of this Constitution to begin with?
NLD spokesman: Go to Thailand and ask why the Pheu Thai Party wants to write a new Constitution. They've won power under a Constitution they hate. Don't you see a bigger irony there?

EU representative: Don't bring Thailand into this. Your boycott of parliament opening almost puts egg on our faces. We were easing sanctions against your country, for God's sake. 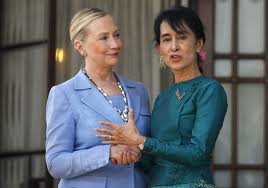 NLD spokesman: Do you want me to recount how many Thein Sein cheerleaders from your part of the world have jammed our hotels? You gave us the signals.
EU representative: You did, too. Your leader Aung San Suu Kyi said that easing of sanctions would help reformers in your country. Are you now saying you don't need our money?
NLD spokesman: It depends on where your money ends up.
White House official: Knock it off, you two. Myanmar can't fail. That's our bottom-line. Do you understand? If dictatorship prevails, we'll all lose.
EU representative: We'll just re-impose sanctions.
White House official: And make us all look like a bunch of fools? Let's get serious. We're in too deep now. The whole world is divided into those who believe us on the bright future of Myanmar and those who are ready to laugh if the junta is taking us for a ride.

NLD spokesman: Show us you are serious then. Tell the junta to change the parliamentary oath. Tell them change it or five more years of sanctions.
White House official: That would give many investors heart attacks. Come on. Just say the oath and forget about it. Nobody takes any oath seriously anymore. Besides, you can change it later when you get majority control of Parliament. When the time comes, you can get Thai advice on how to do it.
NLD spokesman: The Thais aren't even sure they can do it without bloodshed.
White House official: That's the whole point, don't you see? Thailand is Exhibit A of what happens when people can't compromise. Don't repeat your neighbour's mistakes.
NLD spokesman: You have to be stubborn to get democracy. If we obey the parliamentary rules and say the oath, we lose already. A pledge of allegiance is a big deal. At least it is in your country.
EU representative: Whatever pledge you take, the military can come in and say you're done. If that happens, it won't matter whether you protect or respect the Constitution.
White House official: True. Just ask Thailand.
NLD spokesman: They have problems because they don't really care about their Constitution. They don't think of their charter in terms of common values; they just change their highest law back and forth to serve themselves and neutralise enemies.
White House official: Are you telling us it's different in Myanmar? What if you manage to write your own Constitution in the future and a minority bloc in Parliament doesn't accept it? 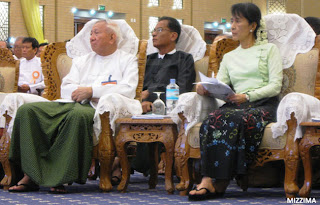 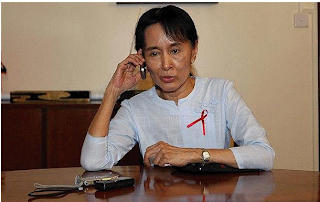 Myanmar opposition leader Aung San Suu Kyi today said she will swear an oath in parliament "as soon as possible", after a political impasse that saw her delay her debut in the legislature. In a dramatic climbdown, the Nobel laureate told reporters at her National League for Democracy (NLD) party headquarters in Yangon that she would pledge to "safeguard" the army-created constitution. "We will go as soon as possible to attend the parliament," she said, ending a dispute seen as the first sign of tension with the government since she won a parliamentary seat in historic April 1 by-elections. "Some people might ask, given that we didn't accept the wording of 'safeguard' in the beginning, why we accept now. The reason we accept it, firstly is the desire of the people. Our voters voted for us because they want to see us in parliament."
Agence France-Presse - 30 April 2012
Posted by Hla Oo at 10:57 AM