(Vikram Nehru’s Commentary from April 23, 2012 Carnegie Endowment.)
Myanmar’s successful by-elections and Aung San Suu Kyi’s landslide victory deservedly captured the international headlines a fortnight ago. But those headlines overshadowed an equally pathbreaking economic development. The day the preliminary election results were announced, the government held Myanmar’s first foreign exchange auction at which the U.S. dollar was traded at 818 kyat. The official rate had been 8.5. The challenge now is to keep the reform momentum going without causing macroeconomic or political instability.
The exchange rate auction is part of a “managed float” that requires the central bank to intervene to keep the exchange rate between certain limits. Myanmar must institutionalize the process by developing an independent central bank, ensuring the foreign exchange auction becomes a permanent feature of the economy, and keeping the real exchange rate at a level that encourages the production of agricultural goods and manufactures.

The exchange rate reform was just the first salvo in what many anticipate will be a steady effort to overhaul the economy and build incentives and institutions for sustained and inclusive growth. In doing so, the government is receiving advice from the IMF, the World Bank, the Asian Development Bank, and the United Nations Development Program, as well as from many bilateral agencies (Japan, Australia, the UK, and Norway to name a few) and other external advisers.
The danger is not that Myanmar will do too little, but that it may be asked to do too much. And the government may be only too willing to oblige, especially if it believes that doing so will accelerate the removal of remaining sanctions or the elimination of external arrears (or both). A rush to reform may cause instability that could be seized upon by reform opponents to rewind the clock and go back to the bad old ways.
The unification of the official with the market exchange rate is a fundamental change. But a large proportion of the population remains desperately poor, without a social safety net to help them survive further policy-induced economic shocks. What must follow, therefore, are reforms that lead to “quick wins” in income generation and poverty reduction. This will instill the belief in the country that economic reforms can bring prosperity and will build a constituency for further change. In modern economic jargon, the government should focus on reforms that loosen the binding constraints to growth. 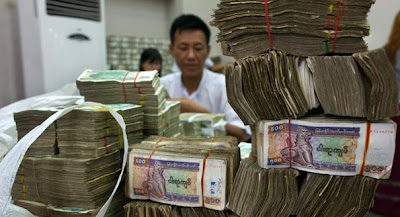 There are three such immediate constraints—inadequate infrastructure that increases production costs, making Myanmar uncompetitive even where it has a comparative advantage (as it does with rice); excessive licensing and controls that suffocate private initiative and breed corruption; and tariff and non-tariff barriers that inhibit trade in manufactures and agricultural products. Addressing these constraints constitutes the first three priorities for economic reform, but two other initiatives are needed to help sustain growth and make it more inclusive.

The Five Priorities
The first priority is to develop a financially viable government, which will allow the state to achieve two critical objectives: It will increase certainty by financing local government and military organizations properly and transparently through the budget. That way, the government can help curb random and arbitrary attempts by these actors to extract revenues from the population. Financial viability will also help provide resources to build much-needed infrastructure, especially ports and rural roads, to facilitate non-gas production and exports (rice, pulses, beans, and labor-intensive manufactures in particular).
Fortunately, increased exports of gas, together with the new market-based exchange rate, will dramatically increase the net earnings of the state-owned Myanma Oil and Gas Enterprise, the exclusive recipient of all gas earnings. It is critical that these net earnings are transferred to the budget and used for social and infrastructure development, especially in regions with ethnic minorities.
The second is to allow increased space for economic activity by private entrepreneurs that is free from state or military patronage—and to give banks increased freedom to lend to them (especially in agriculture). Myanmar is one of the costliest places in the world to start a business. Formal laws governing economic activity either don’t exist or aren’t followed. And actions by the government currently tend to be as distortionary as they are unpredictable. For example, farmers are restricted in their choice of crops, and rice production is subject to a levy.
This needs to change. The government has to recognize that prosperity through increased investment and production will only occur if the property rights of private investors are respected and protected. In due course, this should be enshrined in sensible laws and regulations, such as the new land ownership law under consideration.
Third, the government should eliminate the broad variety of restrictions on imports and exports and promote foreign direct investment. Doing so will eliminate the supply bottlenecks that are throttling economic activity and jumpstart non-oil and gas export production. The combination of a sensible exchange rate policy, substantial foreign direct investment, and a comfortable external-reserves situation (equivalent to nearly nine months of imports) would give the government considerable freedom to liberalize trade without fear of a balance of payments crisis.
The fourth priority is to develop Myanmar’s natural resources—especially natural gas, hydropower, timber, and gems—without falling prey to macroeconomic risks or incurring local environmental and social problems. Managed badly, an abundance of natural resources can be a curse. Managed well, it can be a blessing. Myanmar would do well to observe Hartwick’s Rule: Rents from exhaustible resources should be reinvested in reproducible capital.
This is all the more important in Myanmar, where the bulk of the country’s natural resources are located in ethnic minority regions that have been seeking autonomy from the center for decades. Without adequate safeguards, these regions could see their natural resources depleted rapidly with little long-term development to show for it. One way to avoid this is to transfer natural resource rents into a transparent sovereign wealth fund with watertight governance and clear rules, the long-term proceeds of which can be used for a sustainable level of public investment, including in the ethnic minority regions. This may be a tall order in Myanmar today, but certainly an objective toward which work should begin immediately.
And the fifth is to work with the international community to assist in clearing debts in arrears owed to the Asian Development Bank and World Bank so that Myanmar can once again tap these institutions for concessional resources (neither of these two multilaterals can lend money until their arrears are cleared). Myanmar’s external debt arrears are about $5.5 billion—among bilateral agencies, Japan is the biggest creditor (with about $4 billion in arrears); among multilaterals, the Asian Development Bank and the World Bank, together, are owed arrears in excess of $750 million. The government clearly does not have the resources to pay off these debts (external reserves are only around $6 billion), so it will have to harness the goodwill of bilateral donors to do so.
International Commitment
Even when reduced to five essential priorities, the reform challenge seems daunting. But commitment to making the necessary changes will help build momentum. Neither the government nor the international community should be impatient with progress. Reforms need to be deliberate, well thought through, and appropriate to the country’s implementation capability. The international community, working together, needs to exercise patience, coordinate advice and resources, and work with, not against or around, the country’s institutions—without overburdening them.
While setbacks will inevitably occur, the international community should be in it for the long haul. Myanmar’s strategic location and its natural resource wealth give it advantages few countries have. There is a unique opportunity at hand to use these advantages to build strong foundations for sustainable and inclusive growth.
(Vikram Nehru is the Senior Associate, Asia Program, Bakri Chair in South East Asian Studies. He was also Chief Economist for the World Bank's Asian programs.)
Posted by Hla Oo at 6:49 PM