Nay Zin Latt Calls on US and EU to Honour ‘Promise’

(The article by Dean Nelson from The Telegraph on 5 April 2012.)
Burma has called on the United States and European Union to honour its ‘promise’ to lift economic sanctions after staging a series of by-elections in which Aung San Suu Kyi won a landslide victory.
Free and fair elections, along with access to ethnic conflict areas for humanitarian aid and the release of political prisoners, had been key US and EU conditions for sanctions to be lifted.
In the last few months,  Burma has released almost all of its acknowledged political prisoners, struck peace deals with ethnic rebels, given access to aid convoys, and finally staged elections widely regarded as having been free and fair.
European Union ministers will meet last this month to review their sanctions, while United States Secretary of State Hillary Clinton said she welcomed the elections but would begin only a "targeted easing" of restrictions on investment and financial services to Burma linked to further reform.
Sanctions would remain, she said, for those who "remain on the wrong side of these historic reform efforts." She also said she would relax travel restrictions to the US for Burmese leaders and MPs and appoint an Ambassador to Burma shortly.
The failure of Europe and the United States to make a "commensurate" response to Burma's free elections has caused disappointment in Burma and suggestions of bad faith.
Nay Zin Latt, a senior adviser to President Thein Sein, whose meeting with Aung San Suu Kyi last August kick-started a series of unexpected democratic reforms, said the West should now honour its promises.
"The Electoral process has [now] been successfully conducted, this will be mainly concentrated on by the West and [now it] will be the turn for them to fulfil their promise," he told The Daily Telegraph.
He hinted the government may offer some kind of official role for Aung San Suu Kyi following the elections, although the democracy icon and Nobel laureate has said she would not accept any position which would require to resign her newly-won parliamentary seat.
"As the daughter of General Aung San, the father of our independence, she will be favoured to some extent," said Nay Zin Latt.
The government believes the lifting of sanctions would boost its standing and popularity in the country after the its allied party, the Union Solidarity and Development Party (USDP) was humiliated in the elections.
While there was natural disappointment in its showing, there has not been any criticism of the government from the country's powerful military for its decision to press ahead with reforms, he said. 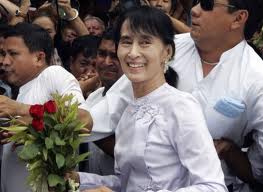 "Government has achieved a lot, made historic improvement, no criticism goes to government. Whatever the result, it will be welcomed by all, government, parliament and election commission," he added.
Despite the scale of the National League for Democracy's victory, the government had already committed itself to reform and will press ahead with both political and economic reforms.
To be a democratic society is the mission but reform is in every sector, political reform has done well and [we're] now focusing on economic reform, health, education, social and so forth," he said.
He said Britain had many skills and strengths which could help Burma, but it was unclear if it would do anything "to help to their old colonial country. Britain is a bit conservative," he added.
*************************
Posted by Hla Oo at 11:51 AM