The Gun That Saved Rangoon in February 1949!


(This is my review of Myoma-Lwin’s book “The Gun That Saved Rangoon”.) 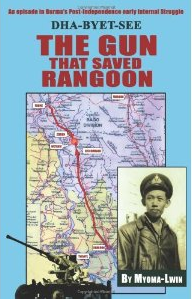 Insein, the Karen Township right on the doorsteps of Rangoon was in KNDO's hands while the Twante Canal the only gateway to the delta and upper Burma both to and from Rangoon was also in the Karens' hands.

KNDO forces were much stronger and more heavily-armed than the lightly-armed UMP battalions they were facing off at the beginning of the Battle of Insein. Also all three Karen Rifles battalions had mutinied and by the end of January the First Karen Rifles from Taungoo and the Second Karen Rifles from Prome were rushing down towards Rangoon to reinforce the KNDO troops digging-in at Insein.

Rangoon was on the brink of falling into Karen hands, but the Karen tide was unexpectedly turned when the Second Karen Rifles was totally destroyed on its way to Rangoon by much weaker Third Burma Rifles Battalion.

This was what ex-Brigadier Kyaw Zaw who eventually fought off the Karens from Insein once wrote, "I brought back Third Burma Rifles from the Delta by boats via sea route and sent them up towards Prome. They met the Second Karen at the village of Wetkaw near the town of Nattalin and basically destroyed the Karens as their CO Lt. Colonel Saw Mya Maung was inferior to the CO of Third Burma Lt. Colonel Chit Myaing."

There were more than the superior capabilities of Col. Chit Myaing in saving the skin of Rangoon Government from the Karen rebellion. Much, much more and the story had a human face and a name and his gun, a big naval gun called The Broom (Dha-byet-see).

The name of the story was Kyaw Thein Lwin who was a 22 year young naval lieutenant in the fledgling Burmese Navy back then in 1949.

What he and his naval volunteer crew with a naval Bofors gun brilliantly and bravely did there at the Wetkaw Bridge during that faithful days in 1949 February not only saved Rangoon and thus the Burmese Government led by U Nu but also the Union of Burma.

Without giving away much of the storyline and spoiling it I would recommend anyone, Burmese or non-Burmese, who have an interest in the modern history of Burma to read this book. You will find the money well spent, for the story is exciting as well as entertaining to read from the very beginning to the very end.


I just found out this book was published in my own way and I am glad for the fact that a narrative by an actual participant in important times in our history has been published .

As for role of commanders in the events around Wetkaw bridge , I like to highlight an event not well known in history .

After the demise of 2nd Karen , abandoned weapons were everywhere on the ground and both 3rd Burrifs and ( then ) insurgent PVOs and red armies ( of communist party  who werein temporary truce ) were searching and collecting those weapons .

In that group were mortar crew of 3rd Burrif . When they returned to their mortar post with their spoils , they found to their dismay that their 3 inch - mortars ( named  thadoe kyaw gaung and thiri kyaw gaung by their commander )had been stolen by the insurgents .

Now we are talking about soldiers indoctrinated with motto " your weapon your life " . We can only imagine how difficult it would be for the commander Maj . Chit Myaing ( then in his early thirties ) to swallow that theft.

My point is at that point  he showed his real quality as a leader . He swallowed his pride and led his force back to Insein instead of started a personal war with PVOs and red troop .

Whenever I studies recent events in Burma and finding so called leaders nowadays letting their emotions and personal matters interfere with the main issues , I feel really sad the fact that we are now lacking leaders with quality of ex-colonel chit myaing ( then a young major in his early thirties).