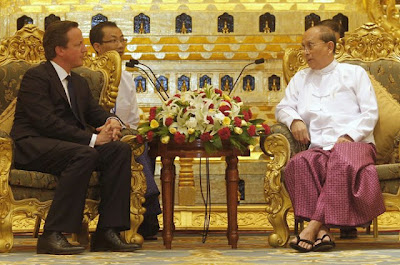 British Prime Minister David Cameron has arrived in Burma today. He met Burmese President Thein Sein in the Presidential House in Naypyidaw at noon. He is meeting opposition leader Aung San Suu Kyi this afternoon in her Rangoon house. He is giving a press conference after the meeting with Aung San Suu Kyi.
His trip is a historic journey as it is the first ever visit by a British prime minister to Britain's former colony Burma since WW II.
In his pre-trip interview with BBC Prime Minister David Cameron has praised Burma's moves towards democracy and said the UK stood ready to respond by easing sanctions on the country. But ahead of his historic visit to the country on Friday, he added: "First I want to go and see for myself on the ground how things are going."  Mr Cameron told BBC Radio 5 live he would also meet President Thein Sein and "thank him for the work that he has done" on democratic reform.

Asked if sanctions should be eased, Mr Cameron said: "If Burma moves towards democracy then we should respond in kind, and we should not be slow in doing that."