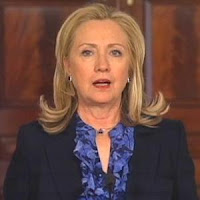 From the beginning of this Administration, we have pursued a policy of engagement to support human rights and reform in Burma. We knew that the challenges were great, but we also believed that a new approach was needed to support the aspirations of the people. And this week, the government and the people made further progress in advancing those aspirations.
The results of the April 1st parliamentary by-elections represents a dramatic demonstration of popular will that brings a new generation of reformers into government. This is an important step in the country’s transformation, which in recent months has seen the unprecedented release of political prisoners, new legislation broadening the rights of political and civic association, and fledgling process in internal dialogue between the government and ethnic minority groups.
These elections and the progress that we have seen are precisely the kind of step that the President and I envisioned when we embarked on this historic opening. President Thein Sein and many of his colleagues inside the government helped launch their country on a historic new path. And while there is much to be done and significant tests lie ahead, we applaud the president and his colleagues for their leadership and courage, and we congratulate Daw Aung San Suu Kyi for her election to the parliament as well as the election of many of her colleagues.

The United States is committed to taking steps alongside the Burmese Government and people as they move down the road of reform and development. In light of the by-election and the other progress of recent months, we are consulting actively with the Congress as well as our allies and friends in Europe and Asia on our response to these recent developments. We are prepared to take steps toward: first, seeking agrement for a fully accredited ambassador in Rangoon in the coming days, followed by a formal announcement of our nominee; second, establishing an in-country USAID mission and supporting a normal country program for the United Nations Development Program; third, enabling private organizations in the United States to pursue a broad range of nonprofit activities from democracy building to health and education; fourth, facilitating travel to the United States for select government officials and parliamentarians; and fifth, beginning the process of a targeted easing of our ban on the export of U.S. financial services and investment as part of a broader effort to help accelerate economic modernization and political reform. Sanctions and prohibitions will stay in place on individuals and institutions that remain on the wrong side of these historic reform efforts.
Now, this reform process has a long way to go. The future is neither clear nor certain. But we will continue to monitor developments closely and meet, as I said when I was there, action with action. We will continue to seek improvements in human rights, including the unconditional release of all remaining political prisoners and the lifting of conditions on all those who have been released. We will continue our support for the development of a vibrant civil society, which we think will greatly add to the reform of the economy and society. We will continue to urge progress in national reconciliation, specifically with ethnic minority groups. And we will continue to press for the verifiable termination of the military relationship with North Korea.
Yet even as we urge these further steps, we fully recognize and embrace the progress that has taken place, and we will continue our policy of engagement that has encouraged these efforts. The leadership has shown real understanding and commitment to the future of their country. That development, we hope, will be sustainable and produce even more results.
As we have done over the last several months, the United States will stand with the reformers and the democrats, both inside the government and in the larger civil society, as they work together for that more hopeful future that is the right of every single person.
Thank you all very much.