(Staff article direct from The BRIETBART NEWS on 20 November 2016.) 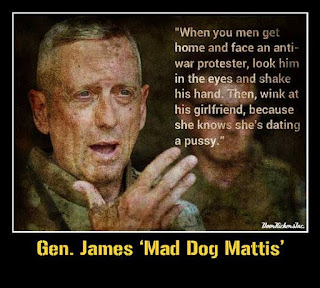 “General James ‘Mad Dog’ Mattis, who is being considered for Secretary of Defense, was very impressive yesterday. A true General’s General!” Trump said on Twitter. The 66-year-old Mattis, who called Trump “the real deal” after their meeting Saturday, is a retired Marine Corps general who led the US Central Command from 2010-2013, overseeing the US withdrawal from Iraq and a surge in Afghanistan. A colorful combat commander and voracious reader, he has been quoted as saying, “Be polite, be professional, but have a plan to kill everyone you meet.”

Trump’s recent choices for other key posts — attorney general, national security adviser and chief White House strategist — have come under fire on civil rights grounds from Democrats and other critics.


But Trump has also moved to mend fences with moderate Republicans as he goes about building a new administration, interviewing one-time foe Mitt Romney for secretary of state, and inviting his ousted transition chief Chris Christie for a sit-down Sunday at his Trump National Golf Club.

He and Vice President-elect Mike Pence began their day attending a Sunday service at a Presbyterian church in the New Jersey countryside. But the early-rising Trump was on Twitter before that, attacking the cast of hit Broadway musical “Hamilton” as rude, and “Saturday Night Live,” the late-night satirical show that mercilessly lampoons him, as “not funny at all.” 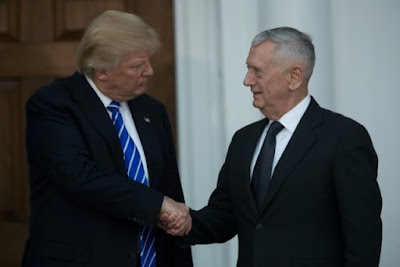 Leftists are reeling over rumor that President-elect Trump might appoint Retired Marine Corps General James Mattis as Secretary of Defense. According to a source with intimate knowledge of Trump’s thinking, Donald Trump wants legendary General James Mattis to run the Department of Defense. Gen. James Mattis, known to his troops as “Mad Dog Mattis,” retired after 41 years of military service. The Marine Corps Times called Mattis the “most revered Marine in a generation.”

Mattis was commander of the United States Central Command since 2010 and led the 1st Marine Division into Iraq in 2003. According to reports, President Barack Obama decided to force the Marine Corps legend out early because he rubbed civilian officials the wrong way, and forced them to answer tough questions regarding Iran.

Mattis, the former commander of U.S. Joint Forces Command and NATO Supreme Allied Commander Transformation, retired from the Marine Corps in 2013 after serving as the commander of U.S. Central Command, which oversees all U.S. military action in the Middle East.

Reached by email Friday evening, Mattis declined to confirm whether he expected to be tapped to run the Pentagon. “Nothing for me to talk about now,” he told TheDC, adding, “Hope all goes well.” Mattis would need a congressional waiver to accept the Defense Secretary position since the law requires people who take the job to have been civilians for at least the seven years prior.

“Mad Dog” Mattis has a legendary status among Marines for his reputation as a warfighter. He’s also among the most quotable people alive. When the Marines arrived in Iraq in 2003, Mattis advised them in a speech: “Be polite, be professional, but have a plan to kill everybody you meet.” 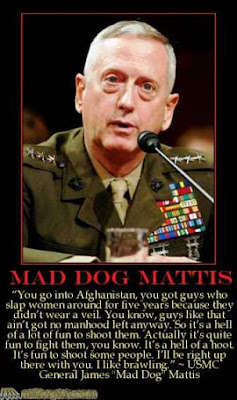 “I don’t lose any sleep at night over the potential for failure. I cannot even spell the word.”
“The first time you blow someone away is not an insignificant event. That said, there are some assholes in the world that just need to be shot.”

“Find the enemy that wants to end this experiment (in American democracy) and kill every one of them until they’re so sick of the killing that they leave us and our freedoms intact.”
“The most important six inches on the battlefield is between your ears.”

“You are part of the world’s most feared and trusted force. Engage your brain before you engage your weapon.”
“There are hunters and there are victims. By your discipline, cunning, obedience and alertness, you will decide if you are a hunter or a victim.”

“No war is over until the enemy says it’s over. We may think it over, we may declare it over, but in fact, the enemy gets a vote.”
“There is nothing better than getting shot at and missed. It’s really great.”

“You go into Afghanistan, you got guys who slap women around for five years because they didn’t wear a veil. You know, guys like that ain’t got no manhood left anyway. So it’s a hell of a lot of fun to shoot them. Actually it’s quite fun to fight them, you know. It’s a hell of a hoot. It’s fun to shoot some people. I’ll be right up there with you. I like brawling.”
“I’m going to plead with you, do not cross us. Because if you do, the survivors will write about what we do here for 10,000 years.”


“Demonstrate to the world there is ‘No Better Friend, No Worse Enemy’ than a U.S. Marine.” 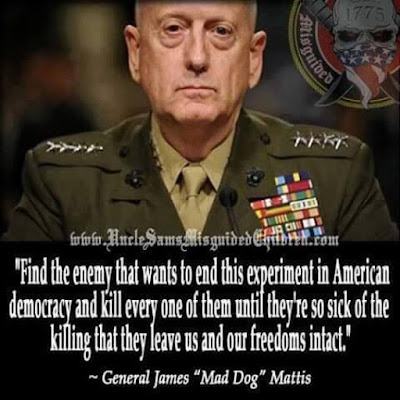