The insurgents tried to demolish major bridges on the main roads but Burmese army units responded and successfully defended the main communication link between Muse and the regional major town Kut-Khaing. Ethnic insurgents had then taken hold of a strategic hill in Mone-Koe and been preparing a strong defensive position there. The insurgents seemed not interested in holding strategic hill positions near Muse though.

Fortunately, because of last year surprise attacks by MDNAA in the neighbouring Kokang area, Burmese army has two light infantry divisions in the area and they immediately  responded with the support of mechanized infantry battalions already in the area. Insurgents’ inability to destroy bridges on the Kutkhaing-Muse Road basically had saved Burmese from a disaster both politically and militarily.


Burmese Air Force has also sent in A5 fighter-bombers today and struck the insurgents’ Mone-Koe positions with deadly accuracy killing hundreds of insurgents. MI-35 attack helicopters were there also firing rockets at enemy positions in the area.

When insurgents attacked 105-mile gate yesterday a 2-battalion-strong army reinforcement column rushed into the area and attacked enemy three times in that night alone and finally was able to block insurgents from entering Muse Town. Again today hundreds of insurgents attacked but had to withdraw because of that army column defending the Muse Town.

At about 10 pm tonight the enemy forces tried to raid Muse Police Station but the army units there with police repelled the attack which killed unconfirmed number of civilians and five policemen. 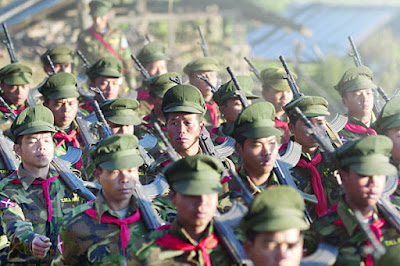 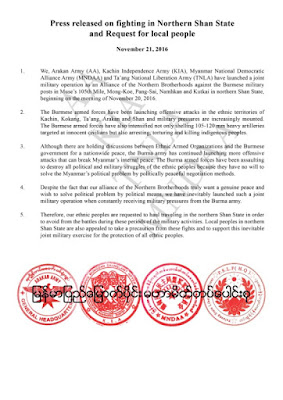 A combined force of ethnic armed groups in northern Shan State yesterday launched an offensive against police and military outposts near the border town of Muse early yesterday morning, with at least eight people killed in the assault.

“Today, we began an offensive operation because the Tatmadaw has continuously carried out offensives in remote ethnic areas of Kachin [State], the Kokang and Ta’ang [areas], and Rakhine and Shan [states],” said Colonel Mong Aik Kyaw, a spokesperson for the Ta’ang National Liberation Army.

The offensive took place at the 105-mile trade zone in Kutkai township, involving soldiers from the TNLA, the Kachin Independence Army, the Myanmar National Democratic Alliance Army and the Arakan Army.

In a statement, the State Counsellor’s Office announced that in addition to police and military installations, the Thein Ni-Namtu, Nant Pon and Swon Lon bridges came under attack. The statement said a total of 10 locations were targeted by hundreds of insurgent troops.

Three civilians and five members of government security forces were killed, according to the State Counsellor’s Office, with 18 civilians and 11 members of the security forces injured. “They are still in hospital for treatment. We are taking full security [measures] in town. The town is under control,” said a police officer from Muse Myoma Police Station. Ministry of Defence spokesperson Major General Aung Ye Win said, “Military and police security forces fought back and are trying to protect the civilians.”

A statement from the four ethnic armed groups involved in the assault asked civilians to avoid travel in the area in order to minimise the risk of getting caught up in the conflict. The statement said yesterday’s offensive was “unavoidable” given the Tatmadaw’s repeated aggression in ethnic areas over recent months.

Sai Noon Lao, secretary of the Shan Youth Organisation of Muse, said hundreds of civilians had been displaced by yesterday’s hostilities. “Now, 900 IDPs [internally displaced persons] are in three monasteries in Muse township. The Kachin Baptist Church, local CSOs and the township administration are supporting and collecting the data of the IDPs,” he said, adding that others were staying on the side of the road linking 105-mile trade zone with Muse town.

Hprawmai I Z Awng, deputy director of the Humanity Institute based in Kutkai, said the situation in Kutkai town was calm and “unusually quiet” but there were fears that hostilities could again flare. “Some Muse locals already went to the China side [of the border] owing to the unstable situation of the town. We can hear the firing of heavy weapons from town,” said Sai Myat Aung, a photographer in Muse.

Mong Aik Kyaw reiterated the ethnic armed groups’ claim that yesterday’s attacks were a necessary escalation of a conflict in northern Shan and Kachin states that has simmered for months. “If we continued just defending against the military’s continuous offensives in our Ta’ang areas, all of us must suffer and feel aggrieved. Almost 10,000 Tatmadaw troops have come to our area and launched offensives [during October and November]. We, all of us, decided to operate on the offensive.”

The attack marks a major blow to the civilian National League for Democracy government’s peace overtures to the nation’s ethnic armed groups, more than seven months into its term in office. “It’s bad news. It’s a step backward for the peace process,” said Ko Ye Myo Hein, a political researcher with the Ta Kaung Institute.

None of the groups involved in the attack has a bilateral ceasefire agreement with the government, nor were any of the four signatories to last year’s nationwide ceasefire agreement. The TNLA, the MNDAA and the Arakan Army have been excluded from the formal peace process, while the KIA has been engaged in a protracted conflict with the Tatmadaw that began in 2011.

Muse is a trade hub in northern Shan State, connected by bridge to Ruili in China’s Yunnan province, and with links also to Bhamaw/Bhamo township in Kachin State. In addition to the casualties, a restaurant owner at the Muse 105-mile outpost, Ko Thet Naung, said one truck had been set ablaze and two others destroyed, and a traffic patrol outpost was bombed. 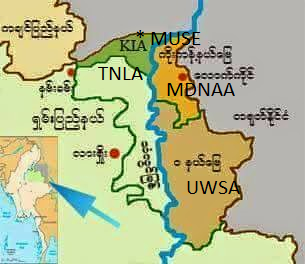 Eight people were killed and 29 wounded when a coalition of northern rebels attacked military and police outposts and a business centre near an important trading hub on Myanmar’s border with China on Sunday, the government said.

China put its army on high alert and said it was providing shelter for some people who fled across the frontier to escape fighting in the towns of Muse and Kutkai, in Myanmar’s northeastern Shan state. Beijing called on the parties involved to exercise calmness and restraint.

The sudden escalation of fighting comes as the government grapples with a conflict in northwestern Rakhine that has sent hundreds of Rohingya Muslims fleeing to Bangladesh, posing a new challenge to Nobel peace prize winner Suu Kyi, who swept to power last year on promises of national reconciliation.

In an important realignment of ethnic armed forces, one of Myanmar’s most powerful militias, the Kachin Independence Army (KIA), joined three smaller groups that have been in a stand-off with the Myanmar military since clashes on the border last year. 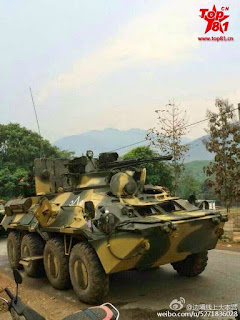 The three groups said they had joined with the KIA to attack the military over the weekend. “The Burma armed forces have been assaulting to destroy all political and military struggles of the ethnic peoples because they have no will to solve Myanmar’s political problem by politically peaceful negotiation methods,” the four groups said in a statement.

One of the government’s peace negotiators, Hla Maung Shwe, told Reuters the fresh violence may severely delay the stuttering peace process. “It was really regrettable that civilian areas have come under attack. This is likely to further complicate the peace process,” he said.

The fighting threatened to derail whatever progress has been made by Suu Kyi since she organised a major peace conference with most ethnic armed groups in August. “We will increase the operations to secure these areas and protect the civilians,” said Ministry of Defence spokesman Major General Aung Ye Win. He did not comment on questions regarding the military’s next steps.

Thousands of people have been displaced by decades of fighting between the military and ethnic armed groups in Shan state, which is home to several large groups operating close to the borders with China and Thailand.

Chinese Foreign Ministry spokesman Geng Shuang said a stray bullet from the fighting had wounded a Chinese resident and China has lodged a protest. China was infuriated last year when five Chinese people were killed when the fighting spilled over into Chinese territory.


“The Chinese army is on high alert and will take the necessary measures to safeguard the country’s sovereignty and safety, as well as protect the lives and property of Chinese citizens living along the border,” the ministry statement said.
Posted by Hla Oo at 1:41 AM